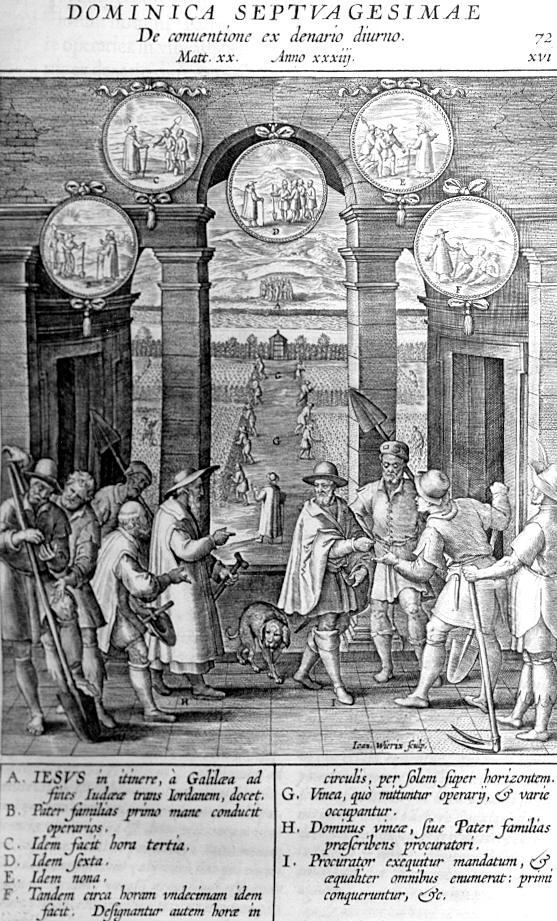 The holy Church calls us together today in order that we may hear from her lips the sad history of the fall of our first parents. This awful event implies the Passion and cruel Death of the Son of God made Man, who has mercifully taken upon Himself to expiate this and every subsequent sin committed by Adam and us his children. It is of the utmost importance that we should understand the greatness of the remedy; we must, therefore, consider the grievousness of the wound inflicted. For this purpose, we will spend the present week in meditating on the nature and consequences of the sin of our first parents.

Formerly, the Church used to read in her Matins of today that passage of the Book of Genesis, where Moses relates to all future generations, but in words of most impressive and sublime simplicity, how the first sin was brought into the world. In the present form of the liturgy, the reading of this history of the fall is deferred till Wednesday, and the preceding days give us the account of the six days of creation. We will anticipate the great instruction, and begin it at once, inasmuch as it forms the basis of the whole week’s teaching.

Oh! terrible page of man’s history! It alone explains to us our present position on the earth. It tells us what we are in the eyes of God, and how humbly we should comport ourselves before His divine Majesty. We will make it the subject of this week’s meditation. And now, let us prepare to profit by the liturgy of this Sunday, which we call Septuagesima.

In the Greek Church, it is called Prophoné (Proclamation), because on this day they announce to the people the coming fast of Lent, and the precise day of Easter. It is also called the Sunday of the prodigal son, because that parable is read in their liturgy for this Sunday, as an invitation to sinners to draw nigh to the God of mercy. But it is the last day of the week Prophoné, which, by a strange custom, begins with the preceding Monday, as do also the two following weeks.

Mass.—The Station at Rome is in the church of Saint Lawrence outside the walls. The ancient liturgists observe the relation between the just Abel (whose being murdered by Cain is the subject of one of the responsories of today’s Matins) and the courageous martyr, over whose tomb the Church of Rome commences her Septuagesima.

The Introit describes the fears of death, wherewith Adam and his whole posterity are tormented, in consequence of sin. But in the midst of all this misery there is heard a cry of hope, for man is still permitted to ask mercy from his God. God gave man a promise on the very day of his condemnation: the sinner needs but confess his miseries, and the very Lord against whom he sinned will become his deliverer.

In the Collect, the Church acknowledges that her children justly suffer the chastisements which are the consequences of sin; but she beseeches her divine Lord to send them that mercy which will deliver them.

The priest adds a third Collect, which is left to his own choice.

These stirring words of the apostle deepen the sentiments already produced in us by the sad recollections of which we are this day reminded. He tells us that this world is a race wherein all must run; but that they alone win the prize who run well. Let us, therefore, rid ourselves of everything that could impede us, and make us lose our crown. Let us not deceive ourselves: we are never sure, until we reach the goal. Is our conversion more solid than was St. Paul’s? Are our good works better done or more meritorious than were his? Yet he assures us that he was not without the fear that he might perhaps be lost; for which cause he chastised his body, and kept it in subjection to the spirit. Man, in his present state, has not the same will for all that is right and just, which Adam had before he sinned, and which, notwithstanding, he abused to his own ruin. We have a bias which inclines us to evil; so that our only means of keeping our ground is to sacrifice the flesh to the spirit. To many this is a very harsh doctrine; hence, they are sure to fail; they never can win the prize. Like the Israelites spoken of by our apostle, they will be left behind to die in the desert, and so lose the promised land. Yet they saw the same miracles that Josue and Caleb saw! So true is it that nothing can make a salutary impression on a heart which is obstinately bent on fixing all its happiness in the things of this present life; and though it is forced, each day, to own that they are vain, yet each day it returns to them, vainly but determinedly loving them.

The heart, on the contrary, that puts its trust in God, and mans itself to energy by the thought of the divine assistance being abundantly given to him that asks it, will not flag or faint in the race, and will win the heavenly prize. God’s eye is unceasingly on all them that toil and suffer. These are the truths expressed in the Gradual.

The Tract sends forth our cry to God, and the Cry is from the very depths of our misery. Man is humbled exceedingly by the fall; but he knows that God is full of mercy, and that, in His goodness, He punishes our iniquities less than they deserve: were it not so, none of us could hope for pardon:

It is of importance that we should well understand this parable of the Gospel, and why the Church inserts it in today’s liturgy. Firstly, then, let us recall to mind on what occasion our Savior spoke this parable, and what instruction He intended to convey by it to the Jews. He wishes to warn them of the fast approach of the day when their Law is to give way to the Christian Law; and He would prepare their minds against the jealousy and prejudice which might arise in them, at the thought that God was about to form a Covenant with the Gentiles. The vineyard is the Church in its several periods, from the beginning of the world to the time when God Himself dwelt among them, and formed all true believers into one visible and permanent society. The morning is the time from Adam to Noah; the third hour begins with Noah and ends with Abraham; the sixth hour includes the period which elapsed between Abraham and Moses; and lastly, the ninth hour opens with the age of the prophets, and closes with the birth of the Savior. The Messias came at the eleventh hour, when the world seemed to be at the decline of its day. Mercies unprecedented were reserved for this last period, during which salvation was to be given to the Gentiles by the preaching of the apostles. It is by this mystery of mercy that our Savior rebukes the Jewish pride. By the selfish murmurings made against the master of the house by the early laborers, our Lord signifies the indignation which the scribes and pharisees would show at the Gentiles being adopted as God’s children. Then He shows them how their jealousy would be chastised: Israel, that had labored before us, shall be rejected for their obduracy of heart, and we Gentiles, the last comers, shall be made first, for we shall be made members of that Catholic Church which is the bride of the Son of God.

This is the interpretation of our parable given by St. Augustine and St. Gregory the great, and by the generality of the holy fathers. But it conveys a second instruction, as we are assured by the two holy doctors just named. It signifies the calling given by God to each of us individually, pressing us to labor during this life for the kingdom prepared for us. The morning is our childhood. The third hour, according to the division used by the ancients in counting their day, is sunrise; it is our youth. The sixth hour, by which name they called our midday, is manhood. The eleventh hour, which immediately preceded sunset, is old age. The Master of the house calls His laborers at all these various hours. They must go that very hour. They that are called in the morning may not put off their starting for the vineyard, under pretext of going afterwards, when the Master shall call them later on. Who has told them that they shall live to the eleventh hour? They that are called at the third hour may be dead at the sixth. God will call to the labors of the last hour such as shall be living when that hour comes; but if we should die at midday, that last call will not avail us. Besides, God has not promised us a second call if we excuse ourselves from the first.

At the Offertory, the Church invites us to celebrate the praises of God. God has mercifully granted us that the hymns we sing to the glory of His name should be our consolation in this vale of tears.

The third Secret is left to the priest’s own choice.

In the Communion antiphon, the Church prays that man, having now been regenerated by the Bread of heaven, may regain that likeness to his God which Adam received at his creation. The greater our misery, the stronger should be our hope in Him who descended to us that we might ascend to Him.

The third Postcommunion is left to the priest’s own choice.