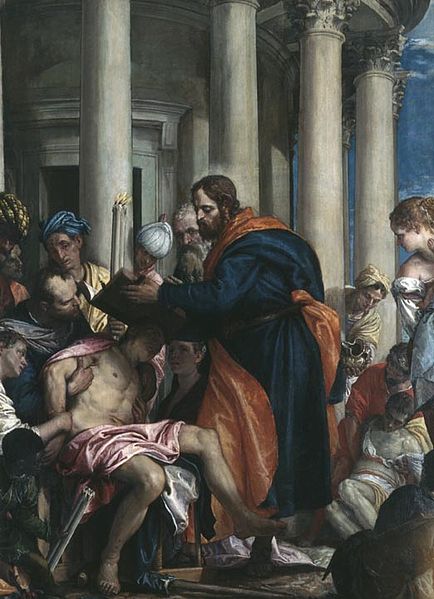 Saint Barnabas was not one of the Twelve. He was the companion of St. Paul and merited the title of Apostle by his preaching and labors. He was stoned by the Jews about 61 A.D.

Barnabas, whose name was originally Joseph, was born of Jewish parents in the Island of Cyprus about the beginning of the Christian Era. A Levite, he naturally spent much time in Jerusalem, probably even before the Crucifixion of Our Lord, and appears also to have settled there (where his relatives, the family of St. Mark the Evangelist, lived) and to have owned land in that area. A rather late tradition recorded by Clement of Alexandria and Eusebius says that he was one of the seventy Disciples; but Acts 4:36-37 favors the opinion that he was converted to Christianity shortly after Pentecost Sunday and immediately sold his property and donated all proceeds to the Church. The Apostles, probably because of his success as a preacher, for he is later placed first among the prophets and doctors of Antioch, surnamed him Barnabas, a name then interpreted as meaning “son of exhortation” or “consolation”.

When Saul the persecutor, later to become Paul the Apostle, made his first visit (dated variously from A.D. 33 to 38) to Jerusalem after his conversion, the Church there, remembering his former fierce spirit, was slow to believe in the reality of his conversion. Barnabas stood sponsor for him and had him received by the Apostles, as Acts 9:27 relates, though he saw only Peter and James, the brother of the Lord, according to Paul himself. Saul went to his house at Tarsus to live in obscurity for some years, while Barnabas appears to have remained at Jerusalem.

The event that brought them together again and opened to both the door to their lifework was an indirect result of Saul’s own persecution. In the dispersion that followed Stephen’s death, some Disciples from Cyprus and Cyrene, obscure men, inaugurated the real mission of the Christian Church by preaching to the Gentiles. They met with great success among the Greeks at Antioch in Syria, and when reports of this reached the Apostles, Barnabas was sent by them to investigate the work of his countrymen. He saw in the conversions the fruit of God’s grace and, though a Jew, heartily welcomed these first Gentile converts. His mind was opened at once to the possibility of this immense field. It is a proof how deeply impressed Barnabas had been by Paul that he thought of him immediately for this work, set out without delay for distant Tarsus, and persuaded Paul to go to Antioch and begin the work of preaching. This incident, shedding light on the character of each, shows it was no mere accident that led them to the Gentile field. Together they labored at Antioch for a whole year and “taught a great multitude”.

Then, on the coming of famine, by which Jerusalem was much afflicted, the offerings of the Disciples at Antioch were carried (about A.D. 45) to the mother-church by Barnabas and Saul. Their mission ended, they returned to Antioch, bringing with them the cousin, or nephew of Barnabas, John Mark, the future Evangelist.

The time was now ripe, it was believed, for more systematic labours, and the Church of Antioch felt inspired by the Holy Ghost to send out missionaries to the Gentile world and to designate for the work Barnabas and Paul. They accordingly departed, after the imposition of hands, with John Mark as helper. Cyprus, the native land of Barnabas, was first evangelized, and then they crossed over to Asia Minor. Here, at Perge in Pamphylia, the first stopping place, John Mark left them, for what reason his friend St. Luke does not state, though Paul looked on the act as desertion. The two Apostles, however, pushing into the interior of a rather wild country, preached at Antioch of Pisidia, Iconium, Lystra, at Derbe, and other cities.

At every step they met with opposition and even violent persecution from the Jews, who also incited the Gentiles against them. The most striking incident of the journey was at Lystra, where the superstitious populace took Paul, who had just cured a lame man, for Hermes (Mercury) “because he was the chief speaker”, and Barnabas for Jupiter, and were about to sacrifice a bull to them when prevented by the Apostles. Mob-like, they were soon persuaded by the Jews to turn and attack the Apostles and wounded St. Paul almost fatally. Despite opposition and persecution, Paul and Barnabas made many converts on this journey and returned by the same route to Perge, organizing churches, ordaining presbyters and placing them over the faithful, so that they felt, on again reaching Antioch in Syria, that God had “opened a door of faith to the Gentiles (v. 26).”

Barnabas and Paul had been “for no small time” at Antioch, when they were threatened with the undoing of their work and the stopping of its further progress. Preachers came from Jerusalem with the gospel that circumcision was necessary for salvation, even for the Gentiles. The Apostles of the Gentiles, perceiving at once that this doctrine would be fatal to their work, went up to Jerusalem to combat it; the older Apostles received them kindly and at what is called the Council of Jerusalem (dated variously from A.D. 47 to 51) granted a decision in their favour as well as a hearty commendation of their work.

On their return to Antioch, they resumed their preaching for a short time. St. Peter came down and associated freely there with the Gentiles, eating with them. This displeased some disciples of James; in their opinion, Peter’s act was unlawful, as against the Mosaic law. Upon their remonstrances, Peter yielded apparently through fear of displeasing them, and refused to eat any longer with the Gentiles. Barnabas followed his example. Paul considered that they “walked not uprightly according to the truth of the gospel” and upbraided them before the whole church. Paul seems to have carried his point.

Shortly afterwards, he and Barnabas decided to revisit their missions. Barnabas wished to take John Mark along once more, but on account of the previous defection Paul objected. A sharp contention ensuing, the Apostles agreed to separate. Paul was probably somewhat influenced by the attitude recently taken by Barnabas, which might prove a prejudice to their work. Barnabas sailed with John Mark to Cyprus, while Paul took Silas and revisited the churches of Asia Minor. It is believed by some that the church of Antioch, by its God-speed to Paul, showed its approval of his attitude; this inference, however, is not certain.

Little is known of the subsequent career of Barnabas. He was still living and labouring as an Apostle in 56 or 57, when Paul wrote 1 Corinthians 9:5-6. from which we learn that he, too, like Paul, earned his own living, though on an equality with other Apostles. The reference indicates also that the friendship between the two was unimpaired. When Paul was a prisoner in Rome (61-63), John Mark was attached to him as a disciple, which is regarded as an indication that Barnabas was no longer living. This seems probable.

Various traditions represent Barnabas as the first Bishop of Milan, as preaching at Alexandria and at Rome, whose fourth bishop, Pope St. Clement, he is said to have converted, and as having suffered martyrdom in Cyprus. The traditions are all late and untrustworthy.

With the exception of St. Paul and certain of the Twelve, Barnabas appears to have been the most esteemed man of the first Christian generation. St. Luke, breaking his habit of reserve, speaks of him with affection, “for he was a good man, full of the Holy Ghost and of Faith”. His title to glory comes not only from his kindliness of heart, his personal sanctity, and his missionary labours, but also from his readiness to lay aside his Jewish prejudices, in this anticipating certain of the Twelve; from his large-hearted welcome of the Gentiles, and from his early perception of Paul’s worth, to which the Christian Church is indebted, in large part at least, for its great Apostle. His tenderness towards John Mark seems to have had its reward in the valuable services later rendered by him to the Church.

The feast of St. Barnabas is celebrated on 11 June. He is credited by Tertullian (probably falsely) with the authorship of the Epistle to the Hebrews, and the so-called Epistle of Barnabas is ascribed to him by many Fathers.