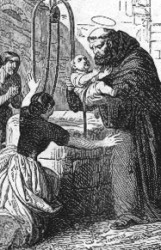 St. John of San Facundo was born at Sahagún in Spain, and belonged to the Augustinian Order. He was educated by the Benedictines at the great abbey of his native town, and while he was still a boy, his father, Don Juan Gonzalez de Castrillo, procured for him a small benefice. The bishop of Burgos and the abbot of Sahagún gave him four other benefices by the time he was 20, because his family was influential and these leaders recognized a promise of greatnes in John. Thus, when John was ordained in 1453, he held five benefices in Burgos at the same time without holding residence in any of them—two acts of disobedience to Church ordinances. Instead he was majordomo in the household of the bishop.

Repenting of such pluralism upon the bishop’s death, he gave up all but the one assigned to the chapel of Saint Agatha in Burgos, where he celebrated the Eucharist daily, catechized the ignorant, and preached. He had converted his life to one of evangelical poverty. With this benefice John financed his theological studies at the University of Salamanca. The education he received there gave him the confidence he need to minister more effectively in the nearby parish of Saint Sebastian, while holding a chaplaincy in the College of Saint Bartholomew.

At that time Salamanca was deeply divided and crime ridden, which gave John ample opportunity to preach reconciliation and conversion. He followed up his preaching with individual counselling in the confessional. John had a remarkable gift for reading souls, which drew still more to his confessional. He was rigid in refusing or deferring absolution to habitual sinners and ecclesiastics who did not live in accordance with the spirit of their profession. John’s fervor in offering the Mass edified all who assisted. In fact, it is related that he was privileged to see the bodily form of Jesus at the moment of consecration. The grace God poured into his soul during his prayers and communions overflowed into his preaching—especially against vice in high places.

After a grave illness in 1463, he requested entry into the Augustinian friary in the same city and was professed on August 28, 1464. Soon after he undertook the office of Novice Master, while continuing his public preaching. His work for reconciliation bore fruit: a pact of peace was signed by hostile parties in 1476. About that time he was elected prior by his community.

In 1479, John predicted his own death, which occurred the same year. At Alba de Tormes his life was threatened by two thugs hired by the duke because of his public denunciation of oppressive landlords. In John’s presence, however, the would-be assassins were struck with remorse, confessed their errand, and begged his forgiveness. But John’s preaching brought further rancor. It is said that John’s death was hastened by poisoning, brought about by a woman in Salamanca whose paramour he had reformed. On June 11, 1479 he died.

By his fearless preaching, John effected profound change in the social life of Salamanca; for this he won the popular acclamation of “apostle of Salamanca“. Soon after his death, miracles and pilgrimages occurred at his tomb. His relics survive in a feretory in the cathedral of his adopted city of which he is patron. In art, he is portrayed with a host in his hand in memory of his devotion to the Eucharist.

There is a commemoration today of the holy martyrs Sts. Basilides, Cyrinus, Nabor and Nazarius were Christian soldiers in the Roman army of Maxentius. They were beheaded by order of Aurelius, prefect of Rome. Though they are commemorated in the Mass of St. John of San Facundo, they have their own proper in some missals. The Roman Martyrology contains this laus: “At Rome on the Aurelian Way, the birthday of the holy martyrs Basilides, Cyrinus, Nabor, and Nazarius, soldiers who were cast into prison in the persecution of Diocletian and Maximilian, under the prefect Aurelius for confession of the Christian name, scourged with scorpions and beheaded.” The quartet is mentioned in the sacramentaries of Pope Saint Gelasius and Saint Gregory the Great as interred on the Aurelian road. In 756, St. Chrodegang, the bishop of Metz procurred the relics of several martyrs from Rome. He placed those of Nazarius in the abbey of Lorsch in the diocese of Worms and those of Nabor in that of Saint Hilary (now corrupted to Saint Avol’s) in the diocese of Metz.