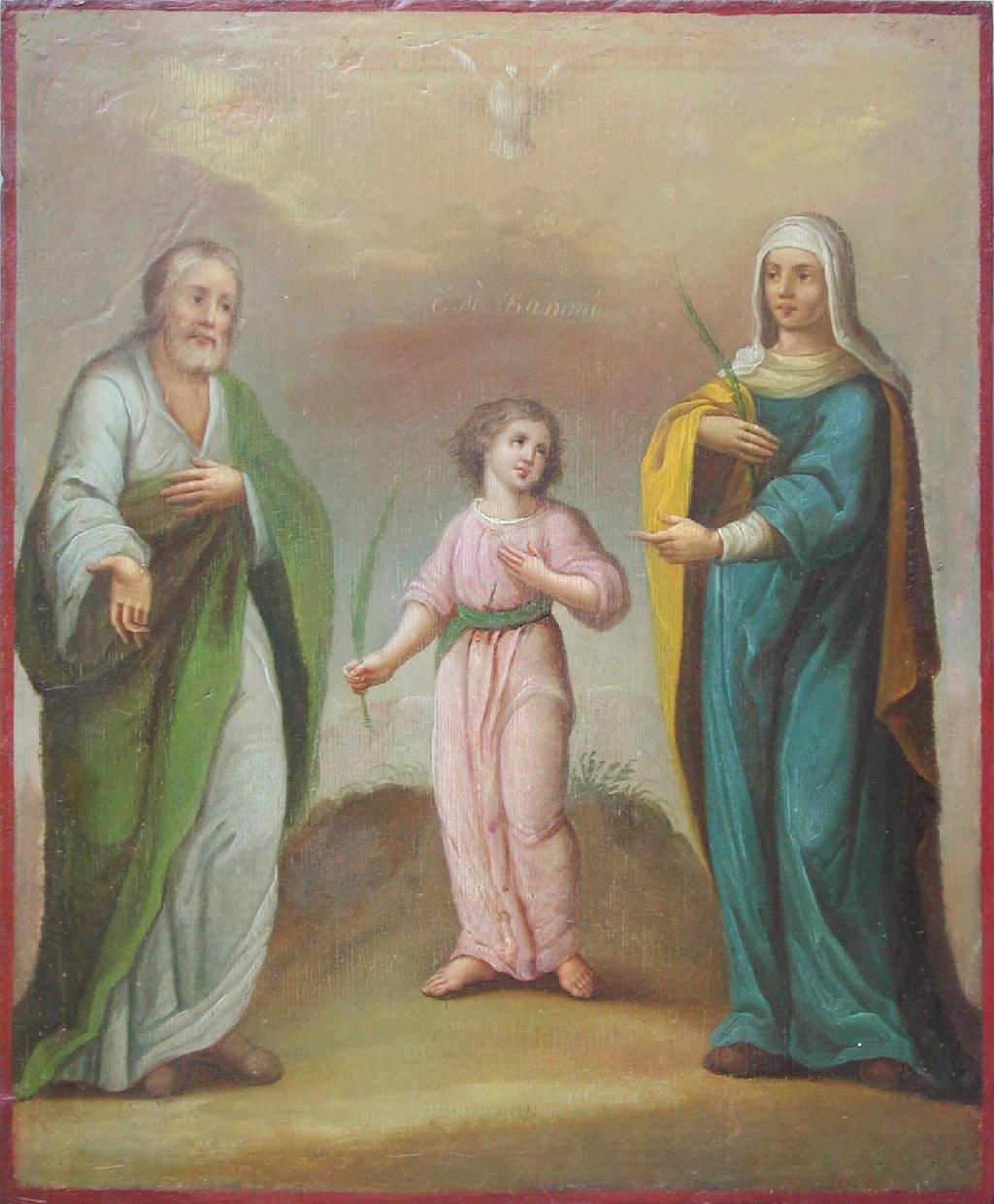 Vitus, Modestus and Crescentia were martyrs under Diocletian and Maximian in 303. The earliest testimony for their veneration is offered by the Martyrologium Hieronymianum. The same Martyrologium has under the same day another mention of a Vitus at the head of a list of nine martyrs, with the statement of the place, in Eboli, “In Lucania”, that is, in the Roman province of that name in Southern Italy between the Tuscan Sea and the Gulf of Taranto. It is easily possible that it is the same martyr Vitus in both cases.

According to the Catholic Encyclopedia, the testimony to the public veneration of the three saints in the fifth century proves that they are historical martyrs. There are, nevertheless, no historical accounts of them, nor of the time or the details of their martyrdom.

During the sixth and seventh centuries a purely legendary narrative of their martyrdom appeared which appears to be based upon other legends, especially on the legend of Poitus, and ornamented with accounts of fantastic miracles. According to this legend, which has no apparent historical value, Vitus was a 7-year-old son of a senator of Lucania (the Golden Legend makes him 12 years old). He resisted his father’s attempts, which included various forms of torture, to make him turn away from his faith. He fled with his tutor Modestus and Modestus’s wife Crescentia, who was Vitus’s nanny, to Lucania. He was taken from there to Rome to drive out a demon which had taken possession of a son of the Emperor Diocletian. This he did, and yet, because he remained steadfast in the Christian Faith, he was tortured together with his tutors. By a miracle an angel brought back the three to Lucania, where they died from the tortures they had endured. Three days later Vitus appeared to a distinguished matron named Florentia, who then found the bodies and buried them in the spot where they were. The author of the legend doubtless connected in his invention three saints who apparently suffered death in Lucania, and were first venerated there.

The veneration of the martyrs spread rapidly in Southern Italy and Sicily, as is shown by the note in the Martyrologium Hieronymianum. Pope Gregory the Great mentions a monastery dedicated to Vitus in Sicily (Epistle XLVIII).

The veneration of St. Vitus, the chief saint of the group, also appeared very early at Rome. Pope Gelasius I (492-496) mentions a shrine dedicated to him (Jaffé, Regesta Pontificum Romanorum), and at Rome in the seventh century the chapel of a deaconry was dedicated to him (Liber Pontificalis, I, 481).

In 756 AD, it is said that the relics of St. Vitus were brought to the monastery of St-Denis by Abbot Fulrad. They were later presented to Abbot Warin of Corvey in Germany, who solemnly transferred some of them to this abbey in 836. From Corvey the veneration of St Vitus spread throughout Westphalia and in the districts of eastern and northern Germany. His cult grew in Prague, Bohemia when, in 925 A.D., king Henry I of Germany presented as a gift the bones of one hand of St. Vitus to Wenceslaus, Duke of Bohemia. This relic is since then a sacred treasure in the St. Vitus Cathedral in Prague.

The cult of St. Vitus became very popular in Slavic lands, where his name (Sveti Vid) replaced the old cult of the god of light Svantovid. In Croatia alone, 123 churches are dedicated to St. Vitus. In Hungary he has been venerated as Szent Vid since the early Middle Ages. Serbs celebrate Vidovdan (St. Vitus Day), a day dedicated to St. Vitus on which day occurred the famous Kosovo battle at 1389.

Saint Vitus is invoked primarily against chorea, which is called “St. Vitus Dance”, and he is one of the Fourteen Martyrs who give aid in times of trouble.

He is represented as a young man with a palm-leaf, in a cauldron, sometimes with a raven and a lion, his iconographic attribute because according to the legend he was thrown into a cauldron of boiling tar and molten lead, but miraculously escaped unscathed.