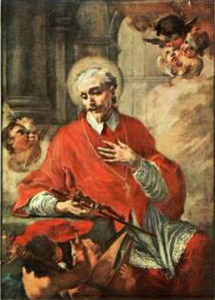 Born September 16, 1625 into a noble family of Venice, Gregorio was the eldest child of Venetian Senator Giovanni Francesco Barbarigo and Lucrezia Lion (or Leoni), who died on March 19, 1631, of the plague. His father brought home a cousin, Franchesina Lippomani, to look after the children. His baptismal name was Gregorio Giovanni Gasparo. The other siblings were Elena, Pietro and Antonio. His last name is also listed as Barbadico and Barbadigo. He was a relative of Cardinal Mercantonio Barbarigo (1686), and the uncle of Cardinal Giovanni Francesco Barbarigo (1719). His father instructed him in philosophy and mathematics, while preceptors taught him Latin and Greek; and he also received the rudiments of music.

In 1643, Barbarigo accompanied Venetian ambassador Aloise Contarini to Münster for the negotiations to prepare the Peace of Westphalia, which ended the Thirty Years’ War; and which was signed on October 24, 1648. There he became acquainted with Archbishop Fabio Chigi, nuncio in Cologne, and a participant in the negotiations. Then, he went to Holland and Flanders; and finally, to Paris. After five years, in July 1648, he returned to Venice and continued his studies in Padua. In 1650, he was elected member of Collegio dei Savi and initiated his political career, which he did not find satisfying. In the winter of 1653, he went to Rome to ask advise to Cardinal Chigi, (the future Pope Alexander VII), who recommended him not to retire as a hermit but to follow the ecclesiastical career; and begin by obtaining a doctorate in law.

Barbarigo obtained a doctorate in utroque iure, both canon and civil law, on September 25, 1655; and was ordained a priest on December 21, 1655, by Gian Francesco Morosini, patriarch of Venice. He left for Rome at the end of February 1656, called by Pope Alexander VII, who initiated him into the papal service. He was named domestic prelate of His Holiness. On April 21, 1656 Fr. Barbarigo was appointed Referendary of the Tribunals of the Apostolic Signature of Justice and of Grace. On June 9, 1665, he was given a canonicate in the cathedral chapter of Padua, without the requirement of residence. In 1656, at the request of Pope Alexander VII, he organized the assistance to the Romans in the Trastevere area who had been stricken by the plague.

Alexander VII consecrated him as the first Bishop of Bergamo on July 29,1657. Bishop Barbarigo took possession of the diocese on the following September 2, through his procurators, Rodolfo Roncalli, archdeacon; and Giovanni Battista Lavezzali, vicar capitular; and arrived there on March 27, 1658. He reorganized the seminary; and thoroughly inspected the 279 parishes of the diocese.

He had been a successful Bishop of Bergamo, and Pope Alexander VII had promoted him to the Cardinalate in 1660. In 1664 he was made Bishop of Padua. In entering upon his episcopal duties, he strove to model himself on St. Charles Borromeo. He was a strong supporter of the work of the Council of Trent. He made the seminaries of Padua and of Bergamo larger and added a library and printing press in Padua.