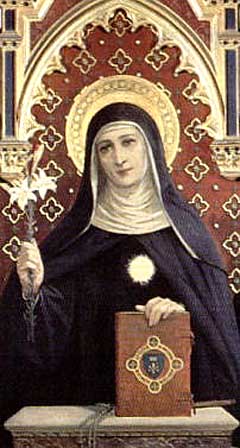 Juliana Falconieri, O.S.M. (1270 – June 19, 1341), was the Italian foundress of the Religious Sisters of the Third Order of Servites (or the Servite Tertiaries).

Juliana belonged to the noble Falconieri family of Florence. Her uncle, Alexis Falconieri, was one of the seven founders of the Servite Order. Under his influence, she decided at a young age to follow the consecrated life. After her father’s death, she received in 1385 the habit of the Third Order of the Servites from Philip Benizi, then Prior General of that Order. She remained at home following the rule Benizi had given her until her mother’s death, when Juliana and several companions moved into a house of their own in 1305. This became the first convent of the Sisters of the Third Order of Servites. Juliana would serve as Superior until the end of her life.

The Servites’ dress consisted of a black gown, secured by a leather girdle, and a white veil. Because the gown had short sleeves to facilitate work, people called the sisters of the new Order “Mantellate.” The sisters devoted themselves especially to the care of the sick and other works of mercy. Juliana directed the community of Servite Tertiaries for 35 years.

An extraordinary occurrence, mentioned in the liturgical texts for her feast day, is said to have occurred at Juliana’s death. At this time, unable to receive Holy Communion because of constant vomiting, she requested the priest to spread a corporal upon her chest and lay the Eucharistic host on it. Shortly thereafter, the host disappeared and Juliana died, on June 19, 1341. The image of a cross, just like the one on the host, was found on her breast.

Immediately after her death she was honored as a saint.

The Servite Order was approved by Pope Martin V in the year 1420. Pope Benedict XIII recognized the devotion long paid to her and granted the Servites permission to celebrate the feast of the Blessed Juliana. Pope Clement XII canonized her in the year 1737, and extended the celebration of her feast day (June 19) to the entire Church. Juliana is usually represented in the habit of her Order with a host upon her breast.