Fifth Day Within the Octave of the Assumption 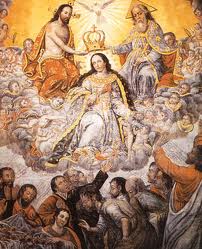 “It is a great thing for a saint to have as much grace as would suffice for many; but if he had sufficient for all men in the world, that would be fulness of measure: and this is the case with Jesus Christ and the Blessed Virgin.” So speaks the prince of theologians with regard to her whom Suarez salutes as the “universal cause, intimately united to the Lord her Son.”

A higher authority than that of the School has confirmed this teaching of the Angelic Doctor; in his encyclical Magnæ Dei Matris, the Sovereign Pontiff Leo XIII has deigned to make his own the words we have just quoted; and he adds: “When therefore we hail Mary as full of grace, we awaken the recollection of her sublime dignity and of the redemption of the human race, wrought by God through her intermediatry; moreover we call to mind the divine and eternal relationship, whereby she is associated to Christ in his joys and his sorrows, his humiliations and his triumphs, in ruling and aiding men with a view to their eternal welfare.”

St. Bernardine of Sienna compares our Lady to the fountain mentioned in Genesis, which sprang from the earth and watered its whole surface. And as it is well to know the different expressions of the different schools, we may add that the illustrious representative of the Seraphic Order recognizes in Mary what he calls “a sort of jurisdiction or authority over every temporal procession of the Holy Ghost,” because, he continues, “she is the Mother of him from whom the Holy Ghost proceeds; and therefore all the gifts, graces, and virtues of this Holy Spirit are administered by her hands, distributed to whom she wills, when she wills, as she wills, and as much as she wills.”

We must not, however, conclude from these words that the Blessed Virgin has a right, properly so called, over the Holy Ghost or his gifts. Nor may we ever consider our Lady to be in any way a principle of the Holy Ghost, any more than she is of the Word himself as God. The Mother of God is great enough not to need any exaggeration of her titles. All that she has, she has, it is true, from her Son by whom she is the first redeemed. But in the historical order of the accomplishment of our salvation, the divine predilection, whereby she was chosen to be Mother of the Savior, made her to be “the source of the source of life,” according to the expression of St. Peter Damian. Moreover, being Bride as perfectly as she was Mother, and united in the fulness of all her powers of nature and of grace to all the prayers, to all the sufferings, to the whole oblation of the Son of Man, as his truly universal co-operatrix in the time of his sorrow: what wonder that she should in the days of his glory have a Bride’s full share in the dispensation of the goods acquired in common, though differently, by the new Adam and the new Eve? Even if Jesus were not bound in justice to give it her, who would expect such a Son to act otherwise?

Bossuet, who cannot be suspected of being carried away, and whom we therefore quote by preference, did not consider his necessary conntroversies with heresy an excuse for not following the doctrine of the saints. “God,” says he, “having once willed to give us Jesus Christ by the holy Virgin, the gifts of God are without repentance, and this order remains unchanged. It is and ever will be true, that having received by her charity the universal principle of grace, we also receive through her mediation its various applications in all the different states whereof the Christian life is made up. Her maternal love having contributed so much to our salvation in the mystery of the Incarnation, which is the universal principle of grace, she will eternally contribute to it in all the other operations which are but dependent on the first.

“Theology recognizes three principal operations of the grace of Jesus Christ: God calls us, justifies us, gives us perseverance. Vocation is the first step; justification is our progress, perseverance ends the voyage, and gives us in our true country glory and rest, which are not to be found on earth. Mary’s charity takes part in these three works. Mary is the Mother of the called, of the justified, and of the persevering; her fruitful charity is a universal instrument of the operations of grace.”

This noble language is an authentic testimony to the tradition of the holy Church of Gaul, which by its Irenæus, its Bernard, its Anselm, and so many others, made France the kingdom of Mary. May the present teachers put to profit what they have inherited from their great predecessors, and continue to sound the inexhaustible depths of mystery in Mary; so that one day they may deserve to hear from her lips that word of Eternal Wisdom: They that explain me shall have life everlasting.

We borrow from the ancient processional of our English St. Editha the beautiful Responsory Quæ est ista; after which we will give a series of other graceful Responsories written in meter, which are to be found in the Antiphoner of Sens, 1552.

The following Hymn was composed by St. Peter Damian: