Saint Leo the Great, Pope and Doctor of the Church 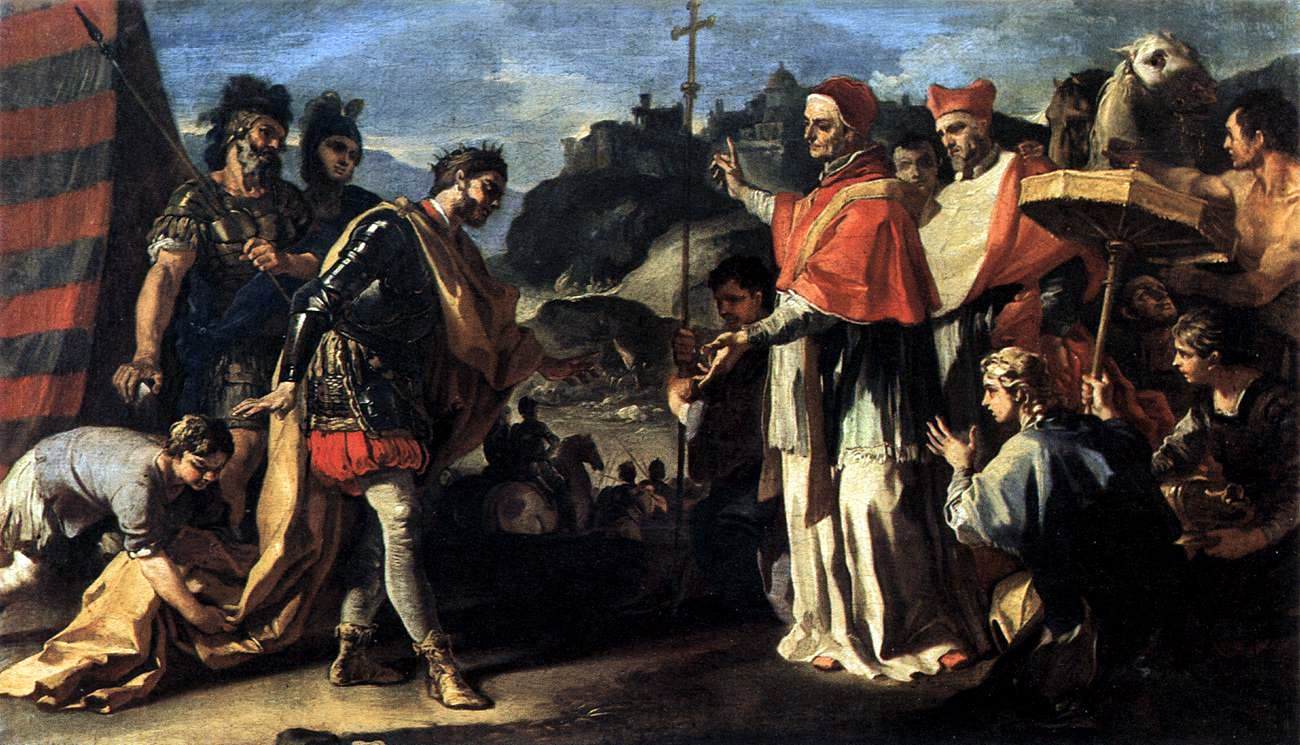 One of the grandest Saints in the Church’s Calendar is brought before us today. Leo, the Pontiff and Doctor, rises on the Paschal horizon, and calls for our admiration and love. As his name implies, he is the Lion of holy Church; thus representing, in his own person, one of the most glorious of our Lord’s titles. There have been twelve Popes who have had this name, and five of the number are enrolled in the catalogue of Saints; but not one of them has so honored the name as he whose feast we keep today: hence, he is called “Leo the Great.”

He deserved the appellation by what he did for maintaining the faith regarding the sublime mystery of the Incarnation. The Church had triumphed over the heresies that had attacked the dogma of the Trinity, when the gates of hell sought to prevail against the dogma of God having been made Man. Nestorius, a Bishop of Constantinople, impiously taught that there were two distinct Persons in Christ—the Person of the Divine Word, and the Person of Man. The Council of Ephesus condemned this doctrine, which, by denying the unity of Person in Christ, destroyed the true notion of the Redemption. A new heresy, the very opposite of that of Nestorianism, but equally subversive of Christianity, soon followed. The monk Eutyches maintained that, in the Incarnation, the Human Nature was absorbed by the Divine. The error was propagated with frightful rapidity. There was needed a clear and authoritative exposition of the great dogma, which is the foundation of all our hopes. Leo arose, and, from the Apostolic Chair, on which the Holy Ghost had placed him, proclaimed with matchless eloquence and precision the formula of the ancient faith—ancient, indeed, and ever the same, yet ever acquiring greater and fresher brightness. A cry of admiration was raised at the General Council of Chalcedon, which had been convened for the purpose of condemning the errors of Eutyches. “Peter,” exclaimed the Fathers, “Peter has spoken by the mouth of Leo!” As we shall see further on, the Eastern Church has kept up the enthusiasm thus excited by the magnificent teachings given by Leo to the whole world.

The Barbarian hordes were invading the West; the Empire was little more than a ruin: and Attila, “the Scourge of God,” was marching on towards Rome. Leo’s majestic bearing repelled the invasion, as his word had checked the ravages of heresy. The haughty king of the Huns, before whose armies the strongest citadels had fallen, granted an audience to the Pontiff on the banks of the Mincio, and promised to spare Rome. The calm and dignity of Leo—who thus unarmed confronted the most formidable enemy of the Empire and exposed his life for his flock—awed the barbarian, who afterwards told his people that, during the interview, he saw a venerable person standing, in an attitude of defense, by the side of Rome’s intercessor: it was the Apostle St. Peter. Attila not only admired, he feared the Pontiff. It was truly a sublime spectacle, and one that was full of meaning;—a Priest, with no arms save those of his character and virtues, forcing a king such as Attila was, to do homage to a devotedness which he could ill understand, and recognize, by submission, the influence of a power which had heaven on its side. Leo, single-handed and at once, did what it took the whole of Europe several ages to accomplish later on.

That the aureola of Leo’s glory might be complete, the Holy Ghost gifted him with an eloquence which, on account of its majesty and richness, might deservedly be called Papal. The Latin language had, at that time, lost its ancient vigor; but we frequently come across passages in the writings of our Saint which remind us of the golden age.

In exposing the dogmas of our holy Faith, he uses a style so dignified and so impregnated with the savor of sacred antiquity, that it seems made for the subject. He has several admirable Sermons on the Resurrection; and speaking of the present Season of the Liturgical Year, he says: “The days that intervened between our Lord’s Resurrection and Ascension, were not days on which nothing was done: on the contrary, great were the Sacraments then confirmed, and great were the mysteries that were revealed.”

Let us now read the sketch of the Saint’s life given by the Church in the Matins of the Feast.

The Greek Church, in her Menæa, has an Office in honor of St. Leo: we take from it the following stanzas. As they were composed before the Schism, they show us that the ancient Church of Constantinople believed the Supremacy of the Roman Pontiff, and that it is not the Latins that have changed the Faith. The Greeks keep the Feast of St. Leo on the 18th of February.

Glory be to thee, O Jesus, Lion of the Tribe of Juda! that hast raised up in thy Church a Lion to defend her in those dark times when holy Faith was most exposed to danger. Thou chargedst peter to confirm his Brethren; and we have seen Leo, in whom Peter lived, fulfill this office with sovereign authority. We have heard the acclamation of the holy Council which, in admiration at the heavenly teachings of Leo, proclaimed the signal favor thou conferredst on thy Flock, when thou badest Peter feed both Sheep and Lambs.

O holy Pontiff Leo! thou worthily representedst Peter in his Chair, whence thy apostolic teaching cased not to flow, ever beautiful in its truth and majesty. The Church of thine own day honored thee as the great Teacher of Faith; and the Church of every succeeding age has recognized thee as one of the most learned Doctors and preachers of the divine Word. From thy throne in heaven, where now thou reignest, pour forth upon us the understanding of the great Mystery which thou wast called on to defend. Under thy inspired pen, this mystery grows clear; we see how sublimely it harmonizes with all other mysteries; and Faith delights at gaining so close a view of the divine object of its belief. Oh! strengthen this Faith within us. The Incarnate Word is blasphemed in these our own times; avenge his glory by sending us men of thy zeal and learning.

Thou triumphedst over barbarian invaders: Attila acknowledged the influence of thy sanctity and eloquence by withdrawing his troops from the Christian land they infested. In these our days, there have risen up new barbarians—civilized barbarians, who would persuade us that religion should be eliminated from Education, and that the State, in its laws and institutions, should simply ignore our Lord Jesus Christ, the King to whom all power has been given, not only in heaven but on earth also. Oh! help us by thy powerful intercession, for our danger is extreme. Many are seduced, and are apostates while flattering themselves that they are still Christians. Pray that the light that is left within us may not be extinguished, and that the public scandals which now exist may be brought to an end. Attila was but a pagan; our modern statesmen and Governments are, or at least call themselves, Christians: have pity on them, and gain for them light to see the precipice to which they are hurrying society.

These days of Paschal Time must remind thee, O holy Pontiff! of the Easters thou didst once spend, here on earth, when, surrounded by the Neophytes, thou gavest them the nourishment of thy magnificent Discourses: pray for the Faithful, who have this Easter risen to a new life with Christ. What they most stand in need of is a ruler and better knowledge of this their Savior, in order that they may cling more closely to him, and persevere in his holy service. Thy prayers must get them this knowledge; by thy prayers, thou must teach them what he is both in his Divine and Human Nature: that as God, he is their Last End, and their Judge after death; as Man, their Brother, their Redeemer, their Model. Bless, O Leo! and help the Pontiff who is now thy successor on the Chair of Peter. Show now thy love for that Rome whose sacred and eternal destinies were so frequently the subject of thy glowing and heavenly eloquence.