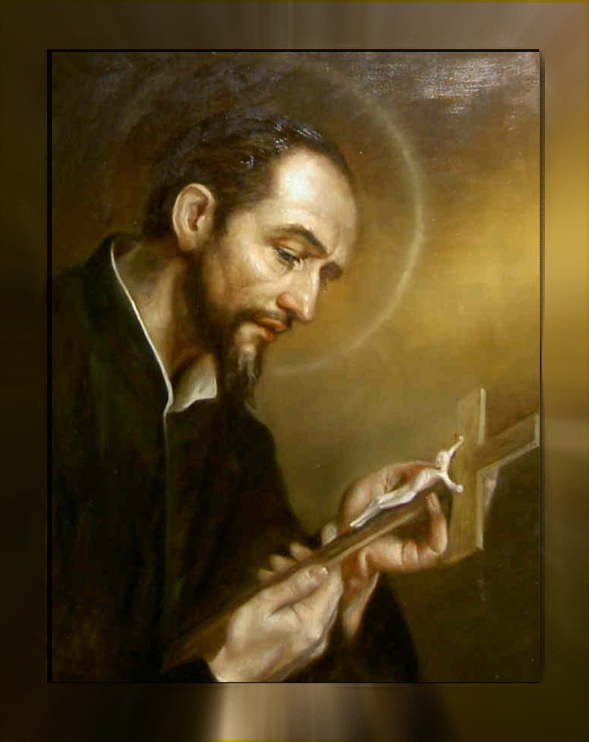 Later than Cajetan of Vicenza and earlier than Ignatius of Loyola, Anthony was called to be the father of one of those religious families which arose in such numbers during the sixteenth century to repair the ruins of the house of God. Lombardy, exhausted and demoralized by the wars for the possession of the duchy of Milan, was encouraged by the sight of the heroic virtues of Zaccaria to believe, hope and love once again. She listened to his fiery exhortations calling her to repentance, to meditation on the Passion and to more fervent devotion to, and more solemn adoration of, the Blessed Sacrament. [St. Anthony Mary Zaccaria was the first who exposed the sacred Host unveiled for the adoration of the faithful for forty hours, in memory of the time spent by our Savior in the tomb. This pious custom passed from Milan to become the practice of the whole Church, and allusion has been made elsewhere to its special significance during the three days immediately preceding Lent.] Thus he was truly the precursor of St. Charles Borromeo, who in his reform of the clergy, people and monasteries of Milan had as his earnest supporters Anthony’s sons and daughters, the Clerks Regular and the Angelic Sisters of St. Paul.

The Congregation began its life in the Oratory of Eternal Wisdom at Milan, but these new disciples of the doctor of the Gentiles took their name of Barnabites from the Church of St. Barnabas, to which they were moved shortly after the death of the saint and where his body rests. The Congregation soon spread, not only throughout Italy, but also into France, Austria, Sweden, and even as far as China and Burma. The sphere of its activities comprised mission work, instruction of youth and everything which furthers the work of God and the sanctification of souls. On the eve of the octave of the apostles SS. Peter and Paul in the year 1539, the holy founder of the congregation was called to his reward at the age of thirty-six in the very house in which he had been born and from the arms of his saintly mother who had brought him up for God, and who joined him shortly afterwards.

When Urban VIII published his famous decrees in the following century, the cultus of Anthony Mary had only been established for ninety-five years. Since these decrees required that the cultus should have been established for a century before, it could claim to have acquired the right of prescription, and since, on the other hand, the witnesses required for the regular canonization of the servant of God were not forthcoming, the cause was suspended. In 1890, however, Leo XIII reinstituted the cultus of Anthony Mary, and a few years later solemnly inscribed his name among the saints and extended his feast to the universal Church.

During this octave of the holy apostles, thou dost appear, O faithful servant of God, as a precious jewel enriching their crown. From thy place of honor, whither the homage of the Church rises to thee, deign to bless those, who, like thee, are engaged, here below, in apostolic labors, without thought of self, without hope save in God, and without being discouraged by the havoc wrought by the ministers of Satan, who force them perpetually to make new beginnings.

In our days, as in thine, the enemies of the Church congratulate themselves upon the prospect of the speedy overthrow of the House of God, and now as formerly everything appears to justify their sinister hopes. However, in our days, as in thine, the teaching of the apostles, upheld by the example and prayers of the saints, is able to save the world. If more than ever the world can see only foolishness in the Cross and those who preach it, yet for all that, it is more than ever the power of God. The saying, “I will destroy the wisdom of the wise, and the prudence of the prudent I will reject” is fulfilled once more before our eyes. At this moment where are the wise? Where are the learned and the clever who promise to adapt the word of salvation to the needs of the present? Never to alter the Word of God, to announce it before God as God gives it, without claiming to make it acceptable to those who insist upon being lost, is to fulfill the first condition for gaining that triumph which St. Paul says will never be wanting to the faithful of Jesus Christ.

Disciple and faithful follower of St. Paul, the knowledge of Christ learnt in his school changed thee from a doctor of the body into a pastor of souls; that love which surpasseth all knowledge made thy short yet full life fruitful even beyond the grave. May God arouse in us that desire for the salvation of souls and spirit of reparation which the Church asks for by thy intercession. May thy sons and daughters drawn up under the apostolic banner do honor to the great name of the Doctor of the Gentiles.