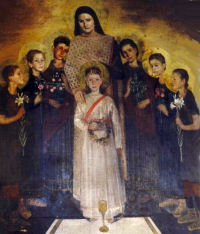 O Symphorosa, thou wife, sister, and mother of martyrs, thy desires are amply fulfilled; followed by thy seven children, thou rejoinest in the court of the Eternal King thy husband Getulius and his brother Amantius, brave combatants in the imperial army, but far more valiant soldiers of Christ. The words of our Lord: A man’s enemies shall be they of his own household, are abrogated in heaven; nor can this other sentence be there applied: He that loveth father and mother more than me, is not worthy of me; he that loveth son or daughter more than me, is not worthy of me. There, the love of Christ our King predominates over all other loves; yet, far from extinguishing them, it makes them ten times stronger by putting its own energy into them; and, far from having to set a man at variance against his father, and the daughter against her mother, it sets a divine seal upon the family and rivets its bonds for all eternity.