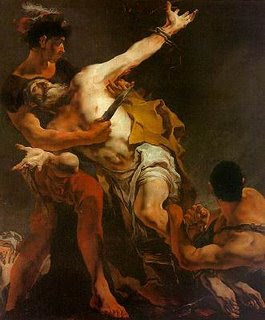 A witness of the Son of God, one of the princes who announced his glory to the nations, lights up this day with his apostolic flame. While his brethren of the sacred College followed the human race into all the lands whither the migration of nations had led it, Bartholomew appeared as the herald of the Lord, at the very starting point, the mountains of Armenia whence the sons of Noe spread over the earth. There had the figurative Ark rested; humanity, everywhere else a wanderer, was there seated in stillness, remembering the dove with its olive branch, and awaiting the consummation of the alliance signified by the rainbow which had there for the first time glittered in the clouds. Behold, blessed tidings awake in those valleys the echoes of ancient traditions: tidings of peace, making the universal deluge of sin subside before the Wood of salvation. The serenity announced by the dove of old was now far outdone. Love was to take the place of punishment. The ambassador of heaven showed God to the sons of Adam, as the most beautiful of their own brethren. The noble heights whence formerly flowed the rivers of Paradise were about to see the renewal of the covenant annulled in Eden, and the celebration, amid the joy of heaven and earth, of the divine nuptials so long expected, the union of the Word with regenerated humanity.