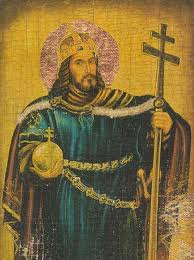 “Out of the eater came forth meat, and out of the strong came forth sweetness. The people with teeth of steel grinding the nations gives itself up as food to him, to whom was said: Kill and eat; the mouth of the Huns, formerly vomiting foam and rage, now distills the honey of charity. Such, O Christ, are thy miracles; such are thy works, O our God!” Thus does Baronius, on reaching in his history the year of Christ 1000, hail the arrival of the Hungarian deputies, who came to offer to the Roman Church the suzerainty of their land, and beseech the Vicar of Christ to confer the title of king upon their Duke Stephen.

We are carried back in thought a century earlier, when, led by Arpadus, the son of Almutz, under the banner of the hawk, the Magyars came down from the mountains of Transylvania into the plains watered by the Theiss and the Danube. Attila seemed to live again in these sons of his race, who poured like a torrent over Germany, Gaul and Italy. But the empire of the Huns over reconquered Pannonia was only to be lasting on condition of its ceasing to be the scourge of God, and becoming the rampart of his Church. In this world, while it is not yet time for eternal justice, the instruments of God’s anger are soon broken, unless they are amenable to love. Five centuries earlier, Attila in person was rushing like an overflowing river upon the capital of the world, when he was met by the Sovereign Pontiff. The Hungarian chronicles record the following message as having been then received from heaven by the universal devastator: “Hearken to the command of the Lord God, Jesus Christ. Thy pride shall not be suffered to enter into the holy city where lie the bodies of my Apostles. Return. Later on a descendent of thine will come to Rome with humility; and I will cause him there to receive a crown that shall last forever.” Attila thereupon recrossed the Alps, and had only just time to reach the Danube before he died. In the days of St. Stephen the heavenly promise was fulfilled. Let the reader not be astonished that we do not discuss its authenticity. Legendary or not, as to the forms with which national traditions have clothed it, there is nothing in this divine engagement that the historian need reject: it is in accordance with the rules of God’s Providence, which governs history. God never forgets a service; nor does apostolic gratefulness wear out with years: the debt of gratitude which Leo the Great contracted, Sylvester II paid at the appointed time. From that tomb respected by the plunderer, a virtue came forth, changing the avenger into an apostle. The crown, placed on the brow of Attila’s successor by Peter’s successor, was destined to be his as long as he should be preceded by the Cross, that other mark of honor conferred upon him. Like the Holy Empire, to which Hungary was to be later on united without however being absorbed by it, the Hungarian monarchy was founded upon Peter; for his sake it subsisted, and he alone, under God, was the safeguard of its future.

Let not the sad forebodings of the present hour make us forget the marvelous power shown on this feast by the Lamb the Ruler of the earth. Scarcely had the blood shed by the sons of Arpadus disappeared from the streets of the cities; scarcely had the smoke of burning ruins and the dust of crumbling walls been scattered; when their fierce energy, tempered like a choice blade in the waters of the sacred font, became the defense of Christianity in the East. A new sort of invasion began; the holiness sprung from Stephen put forth numerous branches, which, shedding their beautiful blossoms over the whole earth, filled all lands with perfumes for the Spouse.

Let us read the history of the apostolic king, as given in the Book of Holy Church.

Apostle and king, protect thy people, assist the Church, succor us all. At the close of that tenth century, when anarchy had penetrated even into the sanctuary, hope sprang up once more on the day whereon the Holy Spirit, the Creator and Renovator, chose thy race, in all its native vigor, to renew the youth of the world. Satan, who thought that the Papacy was humiliated once for all, trembled with rage when he saw new laborers coming to Peter, as to the only foundation on which it is possible to build. The proudest family that had ever caused the empire of Romulus to shake, asked of Rome the right to be counted among the nations of the West. How true it is that the gates of hell shall never prevail against the rock, against the Church founded thereon, against the holy city prepared on the top of mountains to draw all nations to itself. In vain had the storm stirred up the very mire of the torrents of the abyss: it was the hour when God lifted up his hand, as the prophet says, towards the far-off lands, and kings came, bringing to the ever holy Bride those unknown sons whom they themselves had educated for her.

No, the Lord confoundeth not them that wait for him. And therefore we will hope, even against hope, in the future of the noble nation established by thee upon the apostolic strength. A people justly proud of so many irreproachable heroes could not allow itself to be long led astray by a false liberty kept up by Jewish gold, and extolled by all the enemies of the country’s traditions. Martin watches together with thee over the land of his birth; and the sovereign of Hungary, the august Queen of heaven, will not suffer her loyal subject to the listen to the proposals of the infernal spirit.