Caterina Benincasa was born in Siena, Italy, to Giacomo di Benincasa, a cloth dyer who ran his enterprise with the help of his sons, and Lapa Piagenti, possibly the daughter of a local poet. The house where Catherine grew up is still in existence. Born in 1347, she arrived when the black death struck the area; Siena was badly ravaged. Lapa was about forty years old when she prematurely gave birth to twin daughters, Catherine and Giovanna. Lapa had already 22 children, but half of them had died. Giovanna was handed over to a wet-nurse, and presently died, whereas Catherine was nursed by her mother, and developed into a healthy child. She was two years old when Lapa had her 25th child, another daughter named Giovanna. Catherine had her first vision of Christ when she was age five or six, saying that Jesus smiled at her, blessed her, and left her in ecstasy. At age seven she vowed chastity.

Her older sister Bonaventura died in childbirth. Within a year, the younger sister named Giovanna also died. While tormented with sorrow, sixteen-year-old Catherine was now faced with her parents’ wish that she marry Bonaventura’s widower. Absolutely opposed to this, she started a massive fast, something she had learnt from Bonaventura, whose husband had not been considerate in the least. Bonaventura had changed his attitude by refusing to eat until he showed better manners. This had taught Catherine the power of fasting in close relationships. She claimed to feel “jubilant” when cutting off her long hair.

Catherine would later advise her confessor and biographer, the Blessed Raymond of Capua, O.P., (who went on to become Master General of the Order) to do during times of trouble what she did now as a teenager: “Build a cell inside your mind, from which you can never flee.” In this inner cell she made her father into a representation of Christ, Lapa into the Blessed Virgin Mary, and her brothers into the apostles. Serving them humbly became an opportunity for spiritual growth. The greater the suffering, the larger her triumph was. Eventually her father gave up and permitted her to live as she pleased.

A vision of St. Dominic gave strength to Catherine, though, but her wish to join his Order was no comfort to Lapa, who took her daughter with her to the baths in Bagno Vignoni to improve her health. Soon she fell seriously ill with violent rash, fever and pain, which conveniently made her mother accept her wish to join the “Mantellate”, the local association of Dominican tertiaries. Lapa went to the Sisters of the Order and persuaded them to take in her daughter. Within days, Catherine seemed entirely restored, rose from bed and donned the black and white habit of the Third Order of St. Dominic. As a tertiary, she lived outside the convent, at home with her family like before. The Mantellate taught Catherine how to read, and she lived in almost total silence and solitude in the family home. Her custom of giving away food and clothing without asking anyone’s permission cost her family significantly but she demanded nothing for herself. By staying in their midst, she could live out her rejection of them more strongly. She did not want their food, referring to the table laid for her in Heaven with her real family.

Catherine had received the habit of a Dominican tertiary from the friars of the Order, however, only after vigorous protests from the Tertiaries themselves, who up to that point had been only widows.

In about 1366, Catherine experienced what she described in her letters as a “Mystical Marriage” with Jesus, later a popular subject in art as the Mystic marriage of Saint Catherine. Other miracles recounted in Raymond of Capua’s biography include her reception of the stigmata and her receiving communion from Christ himself. Raymond also records that she was told by Christ to leave her withdrawn life and enter the public life of the world. Catherine dedicated much of her life to helping the ill and the poor, where she took care of them in hospitals or homes. Her early pious activities in Siena attracted a group of followers, both women and men, while they also brought her to the attention of the Dominican Order, which called her to Florence in 1374 to interrogate her for possible heresy. After this visit, in which she was deemed sufficiently orthodox, she began traveling with her followers throughout northern and central Italy advocating reform of the clergy and the launch of a new crusade and advising people that repentance and renewal could be done through “the total love for God.”

Physical travel was not the only way in which Catherine made her views known. In the early 1370s, she began dictating letters to various scribes. These letters were intended to reach men and women of her circle, increasingly widening her audience to include figures in authority as she begged for peace between the republics and principalities of Italy and for the return of the Papacy from Avignon to Rome. She carried on a long correspondence with Pope Gregory XI, asking him to reform the clergy and the administration of the Papal States.

In June 1376 Catherine went to Avignon herself as ambassador of Florence to make peace with the Papal States, but was unsuccessful. She also tried to convince Pope Gregory XI to return to Rome. She impressed the Pope so much that he returned his administration to Rome in January 1377. Following Gregory’s death and during the Western Schism of 1378 she was an adherent of Pope Urban VI, who summoned her to Rome, and stayed at Pope Urban VI’s court and tried to convince nobles and cardinals of his legitimacy. She lived in Rome until her death in 1380. The problems of the Western Schism would trouble her until the end of her life. 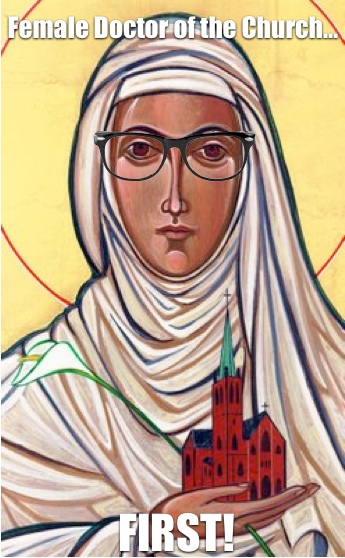 Catherine’s letters are considered one of the great works of early Tuscan literature. More than 300 have survived. In her letters to the Pope, she often referred to him affectionately simply as babbo (“daddy”), instead of the formal form of address as “Holiness”. Other correspondents include her various confessors, among them Raymond of Capua, the kings of France and Hungary, the infamous mercenary John Hawkwood, the Queen of Naples, members of the Visconti family of Milan, and numerous religious figures. Approximately one third of her letters are to women.

Her other major work is The Dialogue of Divine Providence, a dialogue between a soul who “rises up” to God and God himself, as recorded between 1377 and 1378 by members of her circle. Often assumed to be illiterate, Catherine is acknowledged by Raymond in his biography as capable of reading both Latin and Italian. Another hagiographer, Tommaso Caffarini, claimed that she could write in her own hand, though the majority of her written work was dictated.

St Catherine died in Rome, on 29 April 1380, at the age of thirty-three, having suffered a stroke eight days earlier. Jesus is also commonly thought to have died at the same age, and Catherine’s heroine Mary Magdalene is said to have fasted for thirty-three years.

Over the years Catherine had eaten less and less, claiming that she found no nourishment in earthly food. Instead she received the Holy Communion virtually on a daily basis. This extreme fasting appeared unhealthy in the eyes of the clergy and her own sisterhood, and her confessor, Blessed Raymond, ordered her to eat properly. But Catherine claimed that she was unable to, describing her inability to eat as an infermità (illness). She would disgorge what she swallowed, and suffered severe stomach pains, which she bore with patience as another penance.

She was buried in the cemetery of Santa Maria sopra Minerva which lies near the Pantheon. After miracles were reported to take place at her grave, Raymond moved her inside the Basilica of Santa Maria sopra Minerva, where she lies to this day. Her head however, was parted from her body and inserted in a gilt bust from bronze. This bust was later taken to Siena, and carried through that city in a procession to the Dominican church. Behind the bust walked Lapa, Catherine’s mother, who lived until she was 89 years old. By then she had seen the end of the wealth and the happiness of her family, and followed most of her children and several of her grandchildren to the grave. She helped Raymond of Capua write his biography of her daughter, and said, “I think God has laid my soul athwart in my body, so that it can’t get out.”

The people of Siena wished to have St. Catherine’s body. A story is told of a miracle whereby they were partially successful: Knowing that they could not smuggle her whole body out of Rome, they decided to take only her head which they placed in a bag. When stopped by the Roman guards, they prayed to St Catherine to help them, confident that she would rather have her body (or at least part thereof) in Siena. When they opened the bag to show the guards, it appeared no longer to hold her head but to be full of rose petals. Once they got back to Siena they reopened the bag and her head was visible once more. Due to this story, St Catherine is often seen holding a rose. The incorruptible head and thumb were entombed in the Basilica of San Domenico, where they remain.

Pope Pius II canonized St Catherine in the year 1461. Her feast day, at the time, was not included in the Roman Calendar. When it was added in 1597, it was put on the day of her death, April 29, but because of a conflict with the feast of Saint Peter of Verona, which was also on April 29, it was moved in 1628 to the new date of April 30. In the 1969 revision of the Roman Catholic calendar of saints, it was decided to leave the celebration of the feast of St Peter of Verona to local calendars, because he was not as well known worldwide, and Saint Catherine’s feast was restored to its traditional date of April 29. The date in force in the 1628–1969 period is still observed in the calendar used by Traditional Latin Mass adherents.

On May 5, 1940 Pope Pius XII named her a joint Patron Saint of Italy along with Saint Francis of Assisi. Pope Paul VI gave her the title of Doctor of the Church in 1970 along with Saint Teresa of Ávila making them the first women to receive this honour. In 1999, Pope John Paul II made her one of Europe’s patron saints. She is also the patroness of the historically Catholic American woman’s fraternity, Theta Phi Alpha.

One response to “St. Catherine of Siena, Virgin”