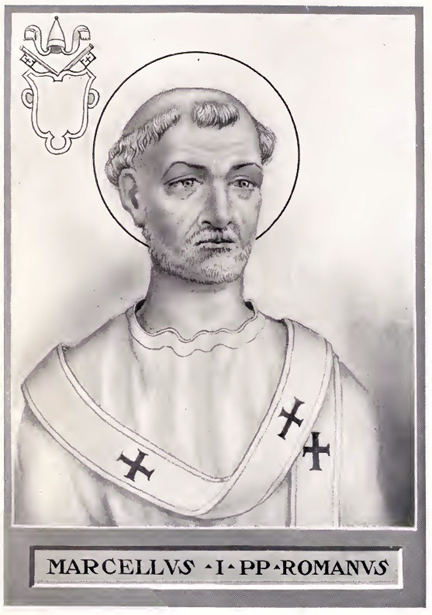 The name of Marcellus is brought before us by the Calendar today—he was a successor of the glorious Hyginus in the papacy, and in martyrdom, and their Feasts fall in the same season of the year. Each Christmastide shows us these two Pontiffs offering their Keys in homage of our Jesus, the invisible Head of the Church they governed. In a few days hence, we shall find our Christmas list of Saints giving us the name of a third Pope and Martyr—Fabian. These three valiant Vicars of Christ are like the three generous Magi—they offered their riches presents to the Emmanuel, their blood and their lives.

Marcellus governed the Church at the close of the last general Persecution. A few months after his death, the tyrant Maxentius was vanquished by Constantine, and the Cross of Christ glittered in triumph on the Labarum of the Roman Legions. The time for Martyrdom was, therefore, very short; but Marcellus was in time; he shed his blood for Christ, and won the honor of standing in Stephen’s company over the Crib of the Divine Infant, waving his palm branch in his venerable hand. He withstood the tyrant Emperor, who bade him abdicate the majesty of the supreme Pontificate, and this in the very City of Rome; for Rome was to be the capital of another King—of Christ—who, in the person of his Vicar, would take possession of it and her old Masters, the Cæsars, were to make Byzantium their Rome. It is three hundred years since the decree of Cæsar Augustus ordered the census of the world to be taken, which brought Mary to Bethlehem, and where she gave birth to a humble Babe; and now, the Empire of that Babe has outgrown the Empire of the Cæsars, and its victory is upon the point of being proclaimed. After Marcellus, we shall have Eusebius; after Eusebius, Melchiades; and Melchiades will see the triumph of the Church.

The Acts of Marcellus are thus given in the Lessons of his Feast.

What must have been thy thoughts, O glorious Marcellus, when imprisoned in a stable, with poor dumb brutes for thy companions! Thou didst think upon Jesus, thy Divine Master, how he was born in a stable, and laid in a manger between two senseless animals. Thou didst appreciate the humiliations of Bethlehem, and joyfully acknowledge that the Disciple is not above his Master. But from that stable wherein the tyranny of an Emperor had thrust it, the majesty of the Apostolic See was soon to be set free, and its glory made manifest to the whole earth. Christian Rome, insulted in thy person, was soon to receive an additional consecration by thy martyrdom, and God was on the point of making over to thy successors the palaces of that proud City, which then knew not the glorious destiny that awaited her. O Marcellus! thou didst triumph, like the Babe of Bethlehem, by thy humiliations. Like Him, too, thou hadst thy cross, and gavest thy life for thy sheep. Forget not the Church of thy unceasing love—bless that Rome which venerates so profoundly the spot where thou didst suffer and die. Bless all the Faithful children of Christ, who keep thy Feast during this holy Season, praying thee to obtain for them the grace of profiting by the mystery of Bethlehem. Pray for them, that they may imitate Jesus, conquer pride, love the Cross, and be faithful in all their trials.