St. John Before the Latin Gate

One day Salome presented her two sons, James and John, to Jesus, and with a mother’s ambition asked Him to grant them the highest places in his Kingdom. In reply, the Savior spoke of the chalice which He Himself would have to drink, and foretold that these two disciples would also drink of it. The elder, James the Great, was the first to give his Master this proof of his love. John, the younger brother, offered his life in testimony of Jesus’ divinity. 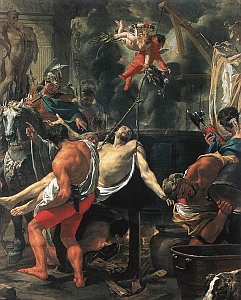 But the martyrdom of the latter Apostle called for a scene worthy of the event. Asia Minor, which his zeal had evangelized, was not a sufficiently glorious land for such a combat. Rome, whither Peter had transferred his Chair and where he died on his cross, and where Paul had bowed down his venerable head beneath the sword, alone deserved the honor of seeing the beloved disciple march on to martyrdom, with that dignity and sweetness which are the characteristics of this veteran of the Apostolic College.

In the year 95 John appeared before the tribunal of pagan Rome. He was convicted of having propagated, in a vast province of the Empire, the worship of a Jew who had been crucified under Pontius Pilate. He was considered a superstitious and rebellious old man, and it was time to rid Asia of his presence. He was, therefore, sentenced to an ignominious and cruel death.

A huge cauldron of boiling oil was prepared in front of the Latin Gate. The sentence ordered that the preacher of Christ be plunged into this bath. The hour had come for the second son of Salome to partake of his Master’s chalice. John’s heart leapt with joy. After cruelly scourging him, the executioners seized the old man, and threw him into the cauldron. But, lo! the boiling liquid lost all its heat; the Apostle felt no scalding. On the contrary, when they took him out again he felt all the vigor of his youthful years restored to him.

The praetor’s cruelty was foiled, and John, a martyr in desire, was to be left to the Church for some few years longer. An imperial decree banished him to the rugged Isle of Patmos, where God revealed to him the future of the Church even to the end of time.

Today is also a Minor Rogation.