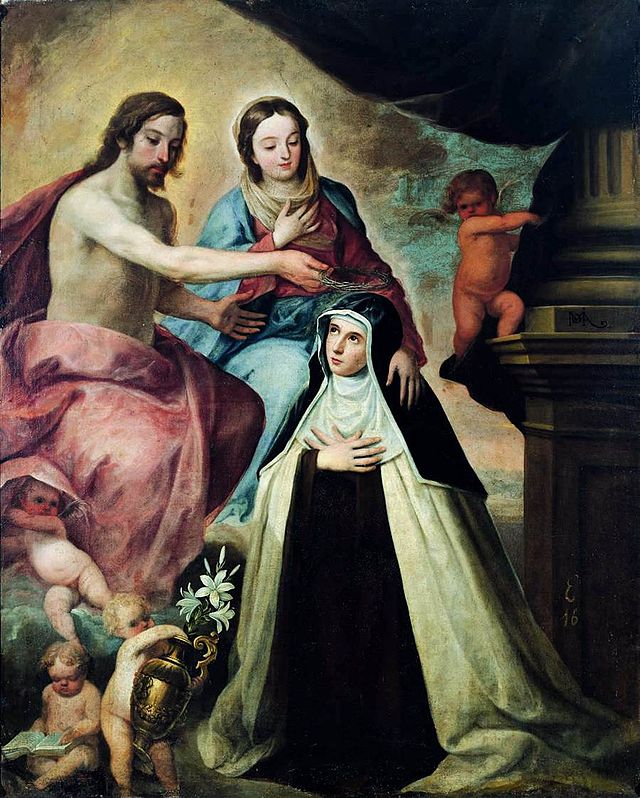 Our Paschal Calendar gives us three illustrious Virgins of the beautiful Italy. We have already kept the feast of the valiant Catharine of sienna; in a few days, we shall be honoring the memory of Angela de Merici, surrounded by her school-children; today, it is the fair lily of Florence, Magdalene de Pazzi, who embalms the whole Church with the fragrance of her name and intercession. She was the loving imitatrix of our Crucified Jesus; was it not just that she should have some share in the joy of his Resurrection?

Magdalene de Pazzi was one of the brightest ornaments of the Order of Carmel, by her angelic purity, and by the ardor of her love for God. Like St. Philip Neri, she was one of the grandest manifestations of the Divine Charity that is found in the true Church. Magdalene in her peaceful Cloister, and Philip in his active labors for the salvation of souls—both made it their ambition to satisfy that desire expressed by our Jesus, when he said: I am come to cast fire on the earth; and what will I, but that it be kindled?

The life of this Spouse of Christ was one continued miracle. Her ecstasies and raptures were almost of every day’s occurrence. The lights given to her regarding the Mysteries were extraordinary; and in order to prepare her for those sublime communications, God would have her go through the severest trials of the spiritual life. She triumphed over them all; and her love having found its nourishment in them, she could not be happy without suffering; for nothing else seemed to satisfy the longings of the love that burned within her. At the same time, her heart was filled to overflowing with charity for her neighbor: she would have saved all mankind, and her charity to all, even for their temporal well-being, was something heroic. God blessed Florence on her account; and as to the City itself, she so endeared herself to its people by he admirable virtues, that devotion to her, even to this day, which is more than two hundred years since her death, is as fervent as ever it was.

One of the most striking proofs of the divine origin and holiness of the Church is to be found in such privileged souls as Magdalene de Pazzi, on whom we see the Mysteries of our salvation acting with such direct influence. God so loved the world, as to give it his Only Begotten Son; and this son of God deigns to love some of his creatures with such special affection, and to lavish upon them such extraordinary favors that all men may have some idea of the love wherewith his Sacred Heart is inflamed for this world, which he redeemed at the price of his Blood. Happy those Christians that appreciate and relish these instances of Jesus’ special love! Happy they that can give him thanks for bestowing such gifts on some of our fellow creatures! They have the true light; whereas they that have an unpleasant feeling at hearing of such things, and are angry at the thought that there can be an intimacy between God and any soul of which they are not worthy—this class of people prove that there is a great deal of darkness mixed up with their faith.

We regret extremely that we have space for a fuller development of the character and life of our Saint. We therefore proceed at once to the Lessons given in her Office. Even they are too short, and give us but an imperfect idea of this admirable Spouse of Christ.

Thy life here below, O Magdalene, resembled that of an Angel, who was sent by God to assume our weak and fallen nature, and be subject to its laws. Thy soul was ceaselessly aspiring to a life which was all heavenly, and thy Jesus was ever giving thee that thirst of Love which can only be quenched at the waters of life everlasting. A heavenly light revealed to thee such admirable mysteries, such treasures of truth and beauty, that thy heart—unequal to the sweetness thus given to it by the Holy Ghost—sought relief in sacrifice and suffering. It seemed to thee, as though there was but one way of making God a return to his favors—the annihilation of self.

Seraphic lover of our God!—how are we to imitate thee? what is our love, when we compare it to thine? And yet, we can imitate thee. The year of the Church’s Liturgy was thy very life. Each of its Seasons did its work in thee, and brought thee new light and love. The divine Babe of Bethlehem, the bleeding Victim on the Cross, the glorious Conqueror of Death, the Holy Ghost radiant with his seven gifts—each of these great Realities enraptured thee; and thy soul, renewed by the annual succession of the Mysteries was transformed into Him who, that he might win our hearts, gives these sublime celebrations to his Church. Thy love of souls was great during thy sojourn here; it is more ardent now that thou art in possession of the Sovereign Good;—obtain for us, O Magdalene, light to see the riches which enraptured thee, and love to love the treasures which enamored thee. O riches! O treasures! is it possible that they are ours too?