Saint John of the Cross, Confessor 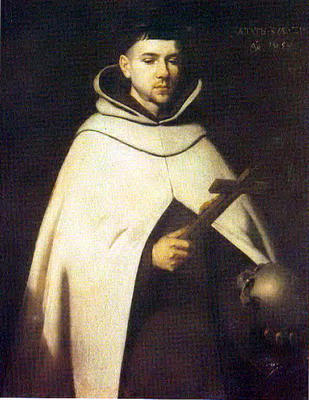 Let us go with the Church to Mount Carmel, and offer our grateful homage to John of the Cross, who, following in the footsteps of Teresa of Jesus, opened a safe way to souls seeking God.

The growing disinclination of the people for social prayer was threatening the irreparable destruction of piety, when in the sixteenth century the divine goodness raised up Saints, whose teaching and holiness responded to the needs of the new times. Doctrine does not change: the asceticism and mysticism of that age transmitted to the succeeding centuries the echo of those that had gone before. But their explanations were given in a more didactic way and analyzed more narrowly; their methods aimed at obviating the risk of illusion, to which souls were exposed by their isolated devotion. It is but just to recognize that under the ever fruitful action of the Holy Ghost, the psychology of the supernatural states became more extended and more precise.

The early Christians, praying with the Church, living daily and hourly the life of her Liturgy, kept her stamp upon them in their personal relations with God. Thus it came about that, under the persevering and transforming influence of the Church, and participating in the graces of light and union, and in all the blessings of that one Beloved so pleasing to the Spouse, they assimilated her sanctity to themselves, without any further trouble but to follow their Mother with docility, and suffer themselves to be carried securely in her arms. Thus they applied to themselves the words of our Lord: Unless you become as little children, you shall not enter into the kingdom of heaven. We need not be surprised that there was not then, as now, the frequent and assiduous assistance of a particular director for each soul. Special guides are not so necessary to the members of a caravan or of an army: it is isolated travelers that stand in need of them; and even with these special guides, they can never have the same security as those who follow the caravan or the army.

This was understood, in the course of the last few centuries, by the men of God who, taking their inspiration from the many different aptitudes of souls, became the leaders of schools, one it is true in aim, but differing in the methods they adopted for counteracting the dangers of individualism. In this campaign of restoration and salvation, where the worst enemy of all was illusion under a thousand forms, with its subtle roots and its endless wiles, John of the Cross was the living image of the Word of God, more piercing than any two-edged sword, reaching unto the division of the soul and the spirit, of the joints also and the marrow; for he read, with unfailing glance, the very thoughts and intentions of hearts. Let us listen to his words. Though he belongs to modern times, he is evidently a son of the ancients.

“The soul,” he says, “is to attain to a certain sense, to a certain divine knowledge, most generous and full of sweetness, of all human and divine things which do not fall within the common-sense and natural perceptions of the soul; it views them with different eyes now, for the light and grace of the Holy Ghost differ from those of sense, the divine from the human. The dark night, through which the soul passes, on its way to the divine light of the perfect union of the love of God—so far as it is in this life possible—requires for its explanation greater experience and light of knowledge than I possess. For so great are the trials, and so profound the darkness, spiritual as well as corporal, which souls must endure, if they will attain to perfection, that no human knowledge can comprehend them, nor experience describe them.

“The journey of the soul to the divine union is called night, for three reasons. The first is derived from the point from which the soul sets out, the privation of the desire of all pleasure in all the things of this world, by an entire detachment therefrom. This is as night for every desire and sense of man. The second, from the road by which it travels; that is, faith, for faith is obscure like night to the intellect. The third, from the goal to which it tends, God, incomprehensible and infinite, who in this life is as night to the soul. We must pass through these three nights if we are to attain to the divine union with God.

They are foreshadowed in holy Scripture by the three nights which were to elapse, according to the command of the angel, between the betrothal and the marriage of the younger Tobias. On the first night he was to burn the liver of the fish in the fire, which is the heart whose affections are set on the things of this world, and which, if it will enter on the road that leadeth unto God, must be burned up, and purified of all created things in the fire of this love. This purgation drives away the evil spirit who has dominion over our soul, because of our attachment to those pleasures which flow from temporal and corporeal things.

“The second night, said the angel, thou shalt be admitted into the society of the holy Patriarchs, the fathers of the faith. The soul having passed the first night, which is the privation of all sensible things, enters immediately into the second night, alone in pure faith, and by it alone directed: for faith is not subject to sense.

“The third night, said the Angel, thou shalt obtain a blessing—that is, God, who in the second night of faith communicates himself so secretly and so intimately to the soul. This is another night, inasmuch as this communication is more obscure than the others. When this night is over, which is the accomplishment of the communication of God in spirit, ordinarily effected when the soul is in great darkness, the union with the bride, which is the Wisdom of God, immediately ensues.

“O spiritual soul, when thou seest thy desire obscured, thy will arid and constrained, and thy faculties incapable of any interior act, be not grieved at this but look upon it rather as a great good, for God is delivering thee from thyself, taking the matter out of thy hands; for however strenuously thou mayest exert thyself, thou wilt never do anything so faultlessly, so perfectly, and securely as now—because of the impurity and torpor of thy faculties—when God takes thee by the hand, guides thee safely in thy blindness, along a road and to an end thou knowest not, and whither thou couldst never travel guided by thine own eyes, and supported by thy own feet.”

We love to hear the Saints describe the paths which they themselves have trodden, and of which, in reward for their fidelity, they are the recognized guides in the Church. Let us add that “in sufferings of this kind, we must take care not to excite our Lord’s compassion before his work is completed. There can be no mistake about it, certain graces which God gives to the soul are not necessarily for salvation, but they must be obtained at a price. If we were to make too many difficulties, it might happen that, to spare our weakness, our Lord would let us fall back into a lower way. This, to the eye of faith, would be a terrible and irreparable misfortune.”

“For the interests of holy Church and the glory of God, it is more important than we are able to say, that truly contemplative souls should be multiplied upon the earth. They are the hidden spring, the moving principle of everything that is for the glory of God, for the kingdom of his Son, and for the perfect fulfilment of his divine Will. Vain would it be to multiply active works and contrivances, yea, and even deeds of sacrifice; all will be fruitless if the Church militant have not her saints to uphold her, saints still wayfarers (in via), which is the state in which the Master chose to redeem the world. Certain powers and a certain fruitfulness are inherent to the present life; it has in itself so few charms that it will not have been useless to show, as we have done, that it has also some advantages.”

The life of St. John of the Cross is thus related by holy Church.

On Carmel’s height and on the mountains, in the plain and in the valleys, may there be an ever increasing number of such souls as are able to reconcile earth to heaven, to draw down the blessings of God, and to avert his anger! We are all called to be saints: may we then, after thy example and through thy prayers, O John of the Cross, suffer the grace of God to work in us with all the plenitude of its purifying and deifying power. Then shall we be able one day to say with thee:

“O divine Life, who never killest but to give life, as thou never woundest but to heal; thou hast wounded me, O divine hand! that thou mayest heal me. Thou hast slain in me that which made me dead, and destitute of the life of God, which I now live. O gentle, subtle touch, the Word, the Son of God, who, because of the pureness of thy nature, dost penetrate subtly the very substance of my soul, and touching it gently absorbest it wholly in divine ways of sweetness, not heard of in the land of Chanaan, nor seen in Theman. O touch of the Word, so gentle, so wonderfully gentle to me; and yet thou wert overthrowing the mountains and breaking the rocks in pieces, in Horeb, by the shadow of thy power going before thee, when thou didst announce thy presence to the Prophet in the whistling of a gentle air. O gentle air, how is it that thou touchest so gently when thou art so terrible and so strong?

“O my God and my life, they shall know thee and behold thee when thou touchest them, who, making themselves strangers upon earth, shall purify themselves, because purity corresponds with purity. As in thee there is nothing material, so the more profoundly dost thou touch me, changing what in me is human into divine, according as thy divine essence wherewith thou touchest me, is wholly unaffected by modes and manner, free from the husks of form and figure. Thou the more gently touchest, the more thou art hidden in the purified soul of those who have made themselves strangers here, hidden from the face of all creatures, and whom thou shalt hide in the secret of thy face from the disturbance of men. Thou removest the soul far away from every other touch whatever, and makest it thine own; thou leavest behind thee effects and impressions so pure, that the touch of everything else seems vile and low, the very sight offensive, and all relations therewith a deep affliction. 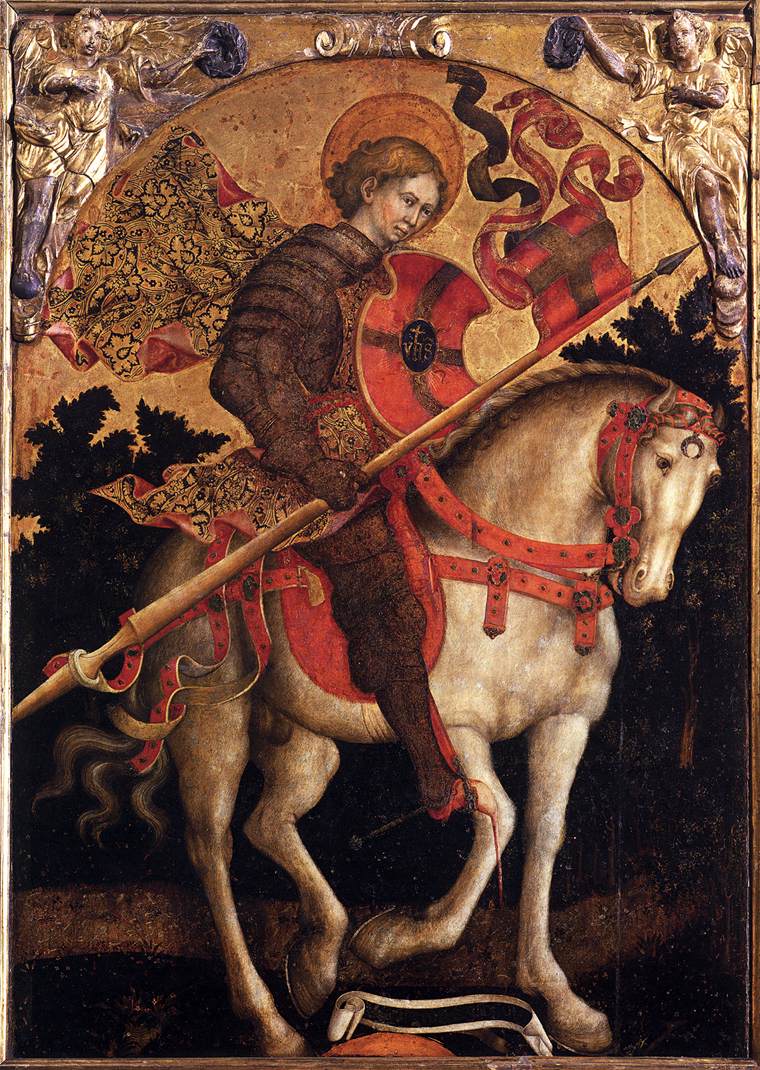 Rome honors today one of her own illustrious sons, Chrysogonus, who gave his life for Christ at Aquilæa in the reign of Diocletian. His splendid church in the Trastevere, which possesses his venerable head, was first built at the very time of the triumph of the faith over idolatry. Chrysogonus instructed in that holy faith the blessed martyr Anastasia, whose memory is so touchingly united with that of our Savior’s birth, the Aurora Mass on Christmas day having been from time immemorial celebrated in her church. The names of both Chrysogonus and his spiritual daughter are daily pronounced in the holy Sacrifice.