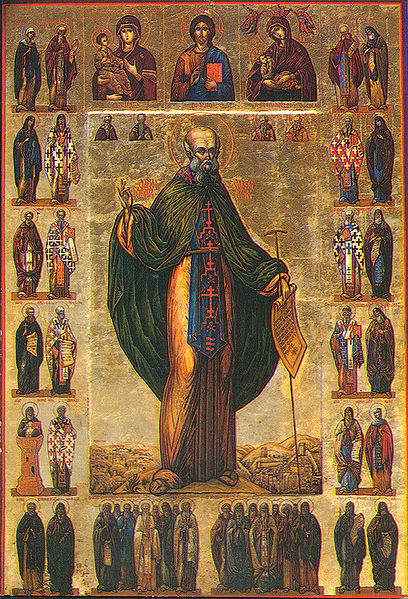 The Roman Church confines herself today to the Office of the Feria; but to that she joins a Commemoration of St. Sabas, Abbot of the celebrated Laura of Palestine, which still exists under his name. This Saint, who died in 533, is the only one of the Monastic Order of whom the Church makes any mention of her Liturgy during the whole period of Advent; we might even say that he is the only simple Confessor whose name occurs in the Calendar of this part of the year; for, as regards St. Francis Xavier, the glorious title of Apostle of the Indies puts him in a distinct class of Saints. Here again we should recognize Divine Providence, which has selected, for these days of preparation for Christmas, those Saints whose characteristic virtues would make them our fittest models in this work of preparation. We have the feasts of Apostles, Pontiffs, Doctors, Virgins: Jesus, the Man-God, the King and Spouse of men, is preceded by this magnificent procession of the noblest of his servants: simple Confession has but a single representative, the Anchoret and Cenobite Sabas, who, by his profession of the monastic life, is of that family of holy solitaries, which began with the Prophet Elias under the Old Testament, and continued up to the time of St. John the Precursor, who was one of its members, and will continue on, during the New Covenant, until the last Coming of Jesus. Let us, then, honor this holy Abbot, towards whom the Greek Church professes a filial veneration, and under whose invocation Rome has consecrated one of her Churches. Let us beg his prayers by this Collect of the holy Liturgy:

O Sabas, thou man of desires! in thy expectation of that Lord who has bid his servants watch until he come, thou didst withdraw into the desert, fearing lest the turmoil of the world might distract thy mind from its God. Have pity on us who are living in the world, and are so occupied in the affairs of that world, and yet who have received the commandment which thou didst so take to heart, of keeping ourselves in readiness for the Coming of our Savior and our Judge. Pray for us, that when he comes, we may be worthy to go out to meet him. Remember also the Monastic State, of which thou art one of the brightest ornaments; raise it up again from its ruins; let its children be men of prayer and faith, as of old; let thy spirit be among them, and the Church thus regain, by thy intercession, all the glory which is reflected on her from the sublime perfection of this holy State.

Let us look again at the Prophecy of Jacob. The holy Patriarch not only foretells that the Messias will be the Expectation of nations; he adds that when this promised Deliverer comes, the scepter will have been taken away from Juda. This oracle is now filled. The flag of Cæsar Augustus floats on the ramparts of Jerusalem. The Temple is still untouched; the abomination of desolation stands not yet in the holy place; sacrifices are there still offered up to God: but then, the true Temple of God, the Incarnate Word, has not yet been built; the Synagogue has not denied Him, who was her expectation; the Victim that was to supersede all others has not been immolated. Yet Juda has no Chief of her own race; Cæsar’s coin is current throughout all Palestine; and the day is not far off when the leaders of the Jewish people will own, in the presence of the Roman Governor, that they have not the power to put any man to death. So that there is now no King upon the throne of David and Solomon, that throne which was to abide forever. O Jesus! Son of David, and King of Peace, now is the time when thou must show thyself, and take possession of the Scepter which has been taken in battle form the hand of Juda and put, for a time, into that of an Emperor. Come! for thou art King, and the Psalmist, thy ancestor, thus sang of thee: “Gird thy sword upon thy thigh, O thou most Mighty! With thy comeliness and thy beauty set out, proceed prosperously, and reign, because of truth and meekness and justice, and thy right hand shall conduct thee wonderfully. Thy arrows are sharp: under thee shall people: thy arrows shall go into the hearts of the King’s enemies. Thy throne is for ever and ever; the scepter of the kingdom is a scepter of uprightness … God, thy God, hath anointed thee, O Christ! who takest thence thy name, with the oil of gladness above thy fellows, who have been honored with the name of King.” When thou art come, O Messias! men will be no more as sheep going astray without a shepherd; there will be but one fold, in which thou wilt reign by love and justice, for all power will be given unto thee in heaven and on earth. When in the hour of thy Passion, thy enemies shall ask thee: Art thou King? thou wilt answer them in all truth: Verily, I am. Come, dearest King, and reign over our hearts; come, and reign over this world, which is thine because thou didst create it, and will soon be thine because thou wilt have redeemed it. Reign, then, over this world, and delay not the manifestation of thy royal power until the day of which it is written: he will break Kings in the day of his wrath; reign from this very hour, and let all people fall at thy feet and adore thee in one grand homage of love and obedience.