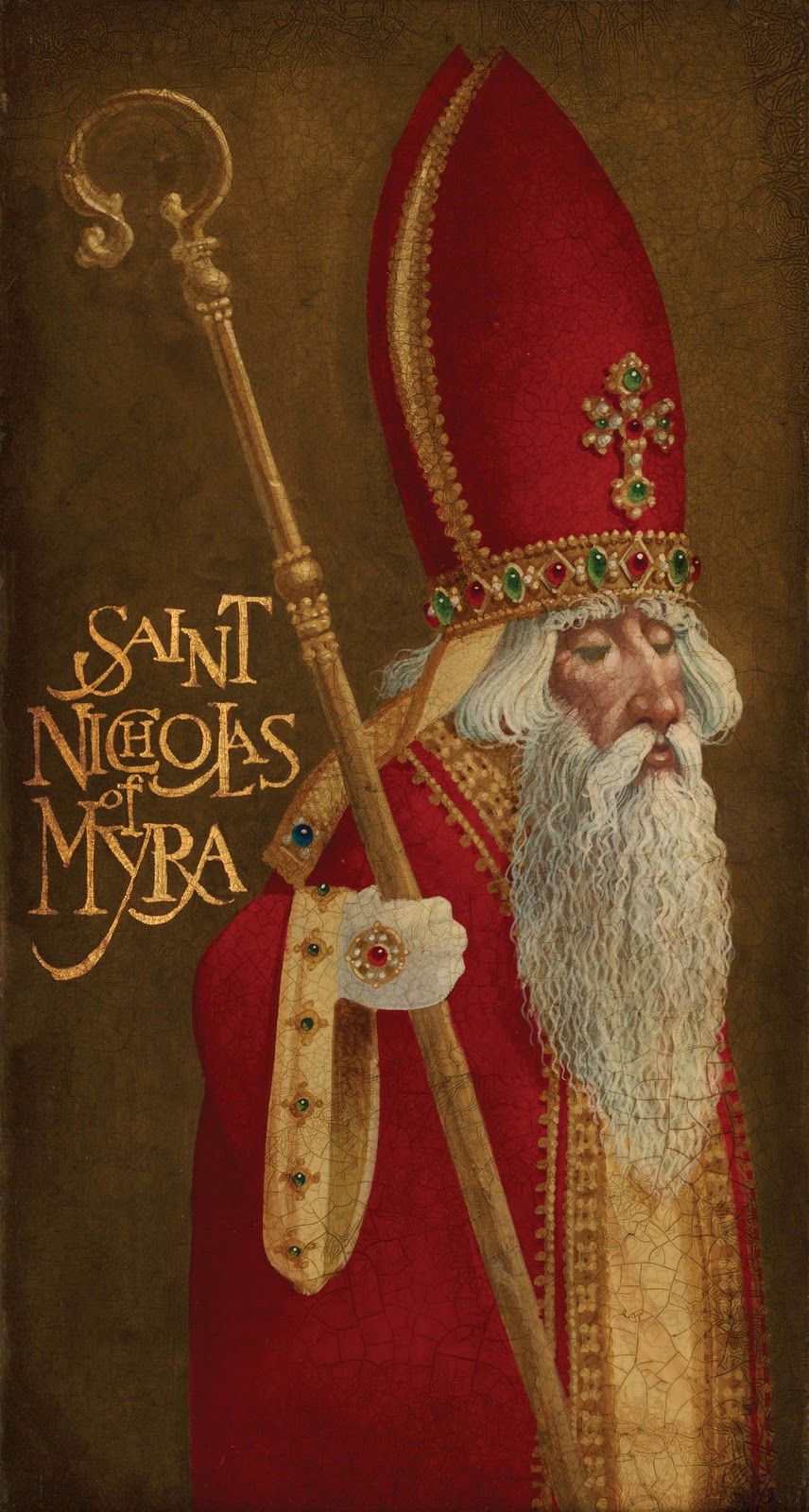 Divine Wisdom has willed that on the way which leads to the Messias, our Great High Priest, there should be many Pontiffs to pay him the honor due to him. Two Popes, St. Melchiades and St. Damasus; two Holy Doctors, St. Peter Chrysologus and St. Ambrose; two Bishops, St. Nicholas and St. Eusebius: these are the glorious Pontiffs who have been entrusted with the charge of preparing, by their prayers, the way of the Christian people towards Him who is the Sovereign Priest according to the order of Melchisedech. As each of their feasts comes, we will show their right to have been thus admitted into the court of Jesus. Today the Church celebrates with joy the feast of the great Thaumaturgus Nicholas, who is to the Greek Church what St. Martin is to us. The Church of Rome has honored the name of Nicholas for nearly a thousand years. Let us admire the wonderful power which God gave him over creation; but let us offer him our most fervent congratulations in that he was permitted to be one of the three hundred and eighteen Bishops who proclaimed, at Nicæa, that the Word is Consubstantial to the Father. The humiliations of the Son of God did not scandalize him. Neither the lowliness of the flesh, which the Sovereign Lord of all things assumed to himself in the womb of the Virgin, nor the poverty of the crib, hindered him from confessing to be Son of God, equal to God, Him who is the Son of Mary: and for this reason, God has glorified this his servant, and given him the power to obtain, each year, for the children of the Church, the grace of receiving this same Jesus, the Word, with simple faith and fervent love. Let us now listen to the eulogy of St. Nicholas, which the Roman Church has inserted in her Liturgy.

Almost all the Breviaries of the Latin Church, up to the 17th century, contain most fervent praises of the virtues and miracles of St. Nicholas, and give the beautiful Office of the holy Bishop, which was composed about the 12th century. We have spoken elsewhere upon this Office, as far as regards the music; at present we will only mention its being drawn up exclusively on the Acts of St. Nicholas, and its being more explicit on some circumstances of the Saint’s life than is the Legend of the Roman Breviary. The following portions of this Office dwell with complacency on a fact which is not mentioned in our Liturgy: we mean the miraculous oil, which, for almost eight hundred years, has flowed without ceasing from the tomb of the holy Bishop, and by means of which God has frequently wrought miracles. The Responsory and Antiphon, which we give, are upon the miracle of the oil itself. They were formerly so familiar to the faithful, that in the 13th century their music was sung to the Responsory Unus Panis, and to the Antiphon O quam suavis est, of the Office of Corpus Christi.

It was impossible for Adam of Saint Victor to remain silent in the praises of St. Nicholas. The Churches, in the Middle Ages, received from him the following beautiful Sequence.

But none of the Sequences of St. Nicholas were so popular as the one we now give. It is to be found in a great many Processionals up to the 17th century, and on its model were composed innumerably others, which, though drawn up in praise of various Patrons, not only kept the measure and the melody, but the very expressions, ingeniously turned here and there, of the Sequence of St. Nicholas.

But no Church has evinced such enthusiasm for St. Nicholas as the Greek Church in its Menæa. This illustrious Thaumaturgus was evidently one of the firmest hopes of the Byzantine Empire, and Constantinople transmitted the same confidence to Russia, which even to this day professes great devotion to St. Nicholas. We extract, as usual, a few stanzas from the sacred chants which the Church of Saint Sophia anciently sang in the Greek language, and which the gilded domes of Moscow re-echo still, every year, in Sclavonic.

Holy Pontiff Nicholas, how great is thy glory in God’s Church! Thou didst confess the name of Jesus before the proconsuls of the world’s empire, and suffer persecution for his name’s sake; afterwards, thou wast witness to the wonderful workings of God, when he restored peace to his Church; and a short time after this again, thou didst open thy lips, in the assembly of the three hundred and eighteen Fathers, to confess with supreme authority the Divinity of our Savior Jesus Christ, for whose sake so many millions of Martyrs had already shed their blood. Receive the devout felicitations of the Christian people throughout the universe, who trill with joy when they think of the glorious merits. Help us by thy prayers during these days when we are preparing for the coming of Him whom thou didst proclaim to be Consubstantial to the Father. Vouchsafe to assist our faith and to obtain fresh fervor to our love. Thou now beholdest face to face that Word by whom all things were made and redeemed; beseech him to permit our unworthiness to approach him. Be thou our intercessor with him. Thou hast taught us to know him as the sovereign and eternal God; teach us also to love him as the supreme benefactor of the children of Adam. It was from him, O charitable Pontiff, that thou didst learn that tender compassion for the sufferings of thy fellow man, which made all thy miracles to be so many acts of kindness: cease not, now that thou art in the company of the Angels, to have pity on and to succor our miseries.

Stir up and increase the faith of mankind in the Savior whom the Lord has sent them. May this be one of the fruits of thy prayer, that the Divine Word may be no longer unknown and forgotten in this world, which he has redeemed with his Blood. Ask for the pastors of the Church that spirit of charity, which shone so brilliantly in thee; that spirit which makes them like their divine Master, and wins them the hearts of their people.

Remember too, O holy Pontiff, that Church of the East which still loves thee so fervently. When thou wast on this earth, God gave thee power to raise the dead to life; pray now that the true life, which consist in Faith and Unity, may return once more and animate that body which schism has robbed of its soul. By thy supplication, obtain of God that the sacrifice of the Lamb, which is so soon to visit us, may be again and soon celebrated under cupolas of Saint Sophia. May the sanctuaries of Kiow and Moscow become resanctified by the return of the people to unity. May the pride of the Crescent be humbled into submission to the Cross, and the majesty of the Czar be brought to acknowledge the power of the Keys of Saint Peter; that thus there may be henceforth neither Scythian, nor Barbarian, but one fold under one Shepherd.

Let us resume our considerations upon the state of the world at the time immediately preceding the coming of the Messias. Everything proves that the prophecies which foretold the great event have now been fulfilled. Not only has the scepter been taken from Juda; the Weeks of Daniel also are almost expired. The other Scriptural predictions relative to the great revolutions, which were to take place in the world, have been successively fulfilled. The Empires of the Assyrians, the Medes, the Persians, and the Greeks, have fallen one after the other; that of the Romans is now at the zenith of its greatness; in its turn, it must yield to the eternal Empire of the Messias. This succession of Empires, which was to result in a perfect kingdom, was foretold; and all is now ready for its final accomplishment. God has also said, by one of his Prophets: Yet one little while, and I will move heaven and earth … and I will move all nations, and the Desired of all nations shall come. Descend, therefore, O thou Eternal Word! All is consummated. The misery of the world is extreme; the crimes of men cry to heaven for vengeance; the whole human race is threatened with self-destruction, and without knowing what it does, it calls for thee as its only resource. Then come! All the predictions which were to designate the Redeemer, have been spoken and promulgated. There is no longer a Prophet in Israel, and the oracles of the Gentile world have ceased to speak. Come, Lord Jesus, and fulfill all things, for the fullness of time has come.