Translation of the Holy House of Loretto 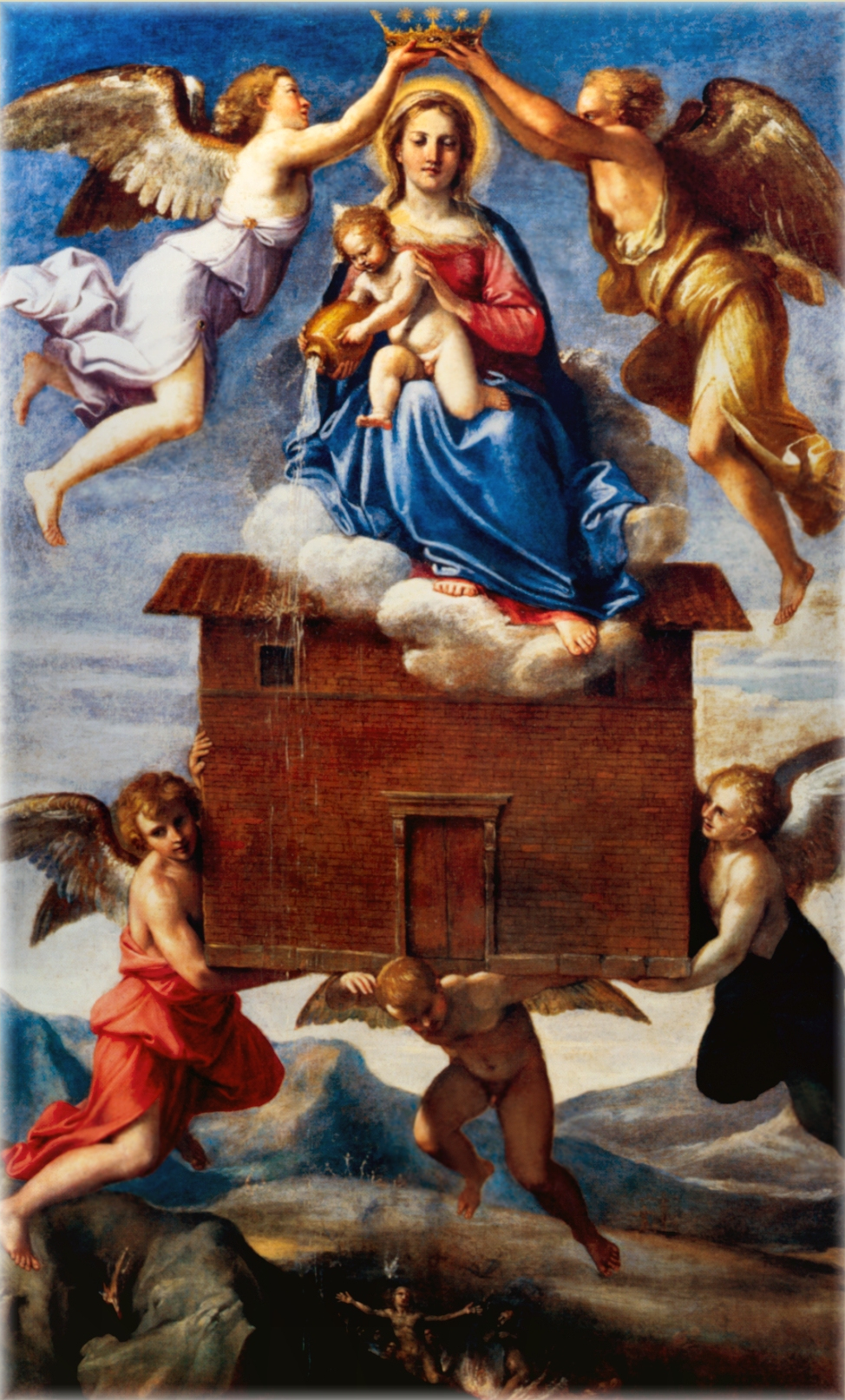 This feast is not one of those which is inserted in the universal calendar of the Church; but it is kept at Rome and in the Papal States, in Tuscany, in the Kingdom of Naples, in Spain, in Belgium, in a great many dioceses in all parts of the Christian world, and by almost all the Religious Orders. It was instituted in thanksgiving for the great favor bestowed on the Western Church whereby God, to console Christians for the loss of the Holy Sepulcher, miraculously translated into a Catholic land the humble yet ever venerable House in which Mary received the message of the Angel, and where, by the consent of this Holy Virgin, the Word was made flesh and began to dwell among us. It is no unusual thing to meet with Catholics who are sincerely devoted to their holy faith, yet who have never heard of the House of Loretto. It is for their sakes that we have resolved to take the opportunity of this Feast to give an exact and concise account of this wonderful event. We take it from the learned and judicious author of the Life of M. Olier.

“It was during the Pontificate of Celestine V, in 1291, when the Christians had irrevocably lost the Holy places of Palestine, that the House, wherein was achieved the mystery of the Incarnation in the womb of Mary, was translated by the Angels from Nazareth into Dalmatia or Sclavonia, and placed by them on a hill near a little town called Tersatto. The miracles which were continually being wrought in this holy house, the official inquiry made by chosen deputies who visited Nazareth in order to attest the Translation, and, lastly, the universal belief of all countries and the pilgrims who went from all parts to venerate a Sanctuary which had ever been dear to Christians—all this seemed proof enough of the miracle. But God gave another testimony, of which the whole people of Italy and Dalmatia were the vouchers.

“Three years and seven months had elapsed since this first translation when, in the year 1294, the Holy House was carried across the Adriatic Sea to the territory of Recanati, and placed in a forest the property of a lady called Loretta. The inhabitants of Dalmatia were in the deepest affliction: nothing could have been a greater trial to them. As a slight consolation to themselves, they erected a church on the spot where the house had stood; it was dedicated to our Lady, and was served, later on, by the Franciscan Fathers. Over the porch was placed this inscription: This is the place where stood the Holy House of Nazareth, which now is honored in the territory of Recanati (“Hic est locus in quo fuit sacra Domus Nazarena, quæ nunc in Recineti partibus colitur.”). Many of the people of Dalmatia went to live in Italy near the Holy House, where they instituted the Society of Corpus Domini (known under the name of Sclavonians), which lasted even to the Pontificate of Paul III.

“This second Translation was soon rumored throughout Christendom. There came from almost every part of Europe innumerable pilgrims to Recanati, that they might visit the House, which has ever since gone under the name of The House of Loretto. The people of Recanati, anxious that every doubt upon this favor granted them should be removed, sent over, first to Dalmatia and afterwards to Nazareth, sixteen of the most respectable persons of the neighborhood, who were instructed to make fresh inquiries in both places. But here again, God would certify the prodigy by a third and a fourth Translation, which were made, close upon each other, in the same territory of Recanati. The Holy House had been in the forest of Loretto eight months, when it was found that the pilgrims were continually attacked by brigands, who were attracted to the neighborhood by the hope of booty. The house was miraculously removed the distance of a mile, and placed on a piece of rising ground, which belonged to two brothers of the family of the Antici. These also laid hands on the offerings of the pilgrims; and having quarrelled about the division of their plunder, they took up arms against each other. Then it was that the Holy House, in the year 1295, was once more translated: this time also to a very short distance, but near the high road. There has been built the town of Loretto, and there, to this day, remains the House of Loretto.”

This prodigy has been attested not only by the annalists of the Church, and by the local historians of Loretto (e.g., Tursellini and Martorelli), but by writers whose profound learning has gained them a world-wide reputation, and among them we may cite Papebroke, Natalis Alexander, Benedict XIV, Trombelli, &c. Who, that is not blind with prejudice, could seriously think of preferring an idle repugnance to the authority of such writers as these, who are the received masters of historical criticism, and whose united opinion would not be rejected on any other question?

But in a Catholic point of view, it is certain that those persons would be guilty of excessive temerity, who would disregard the countless miracles which have been wrought in the Holy House of Loretto. They dare not deny all these miracles; and yet, by denying the fact in question, they are admitting that God is giving his sanction by miracles to what would be, if false, the most absurd and grossest deception. They would incur the imputation of temerity on another ground, inasmuch as they would be slighting the authority of the Holy See, which has been, for upwards of six hundred years, so zealous in defending the truth of this Translation, and in offering it to the veneration of the faithful as a means of honoring the Incarnate Word and his ever Blessed Mother. Among the explicit approbations of the Holy See regarding the miracle of Loretto, we will mention the Bulls of Paul II, of Leo X, of Paul III, of Paul IV, and of Xystus V; the Decree of Urban VIII, in 1632, establishing this Feast in the Marche of Ancona; the Decree of approving the Proper Office the Indults of Benedict XIII, and his successors, extending this feast to the several provinces of the Catholic world.

That we may enter into the spirit of the Holy See, which has spared nothing in order to encourage the confidence of the faithful in the Holy House of Nazareth, or rather (as by the divine mercy it has now become) the House of Loretto, we will give the following from the Office of its miraculous Translation: