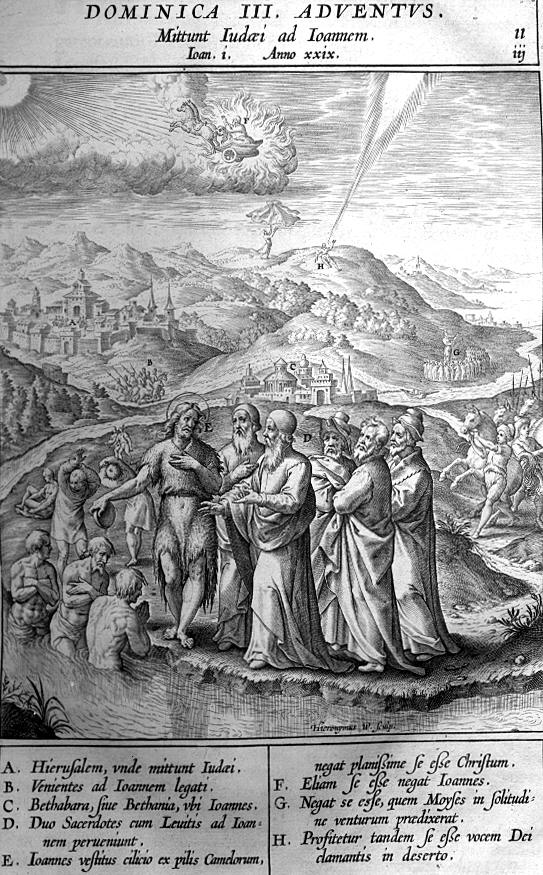 Today again, the Church is full of joy, and the joy is greater than it was. It is true that her Lord is not come; but she feels that he is nearer than before, and therefore she thinks it just to lessen somewhat the austerity of this penitential season by the innocent cheerfulness of her sacred rites. And first, this Sunday has had the name of Gaudete given to it, from the first word of the Introit; it also is honored with those impressive exceptions which belong to the fourth Sunday of Lent, called Lætare. The Organ is played at the Mass; the Vestments are Rose color; the Deacon resumes the dalmatic, and the Subdeacon the tunic; and in Cathedral Churches, the Bishop assists with the precious mitre. How touching are all these usages, and how admirable this condescension of the Church, wherewith she so beautifully blends together the unalterable strictness of the dogmas of faith and the graceful poetry of the formulæ of her liturgy! Let us enter into her spirit, and be glad on this third Sunday of her Advent, because our Lord is now so near unto us. Tomorrow we will resume our attitude of servants mourning for the absence of their Lord and waiting for him; for every delay, however short, is painful and makes love sad.

O Holy Roman Church, City of our Strength! behold us thy children assembled within thy walls, around the tomb of the Fisherman, the Prince of the Apostles, whose sacred relics protect thee from their earthly shrine, and whose unchanging teaching enlightens thee from heaven. Yet, O City of strength! it is by the Savior, who is coming, that thou art strong. He is thy wall, for it is he that encircles, with his tender mercy, all thy children; he is thy bulwark, for it is by him that thou art invincible, and that all the powers of hell are powerless to prevail against thee. Open wide thy gates, that all nations may enter thee; for thou art mistress of holiness and the guardian of truth. May the old error, which sets itself against the faith, soon disappear, and peace reign over the whole fold! O Holy Roman Church! thou hast forever put thy trust in the Lord; and he, faithful to his promise, has humbled before thee the haughty ones that defiled thee, and the proud cities that were against thee. Where now are the Cæsars, who boasted that they had drowned thee in thine own blood? where the Emperors, who would ravish the inviolate virginity of thy faith? where the Heretics, who, during the past centuries of thine existence, have assailed every article of thy teaching, and denied what they listed? where the ungrateful Princes, who would fain make a slave of thee, who had made them what they were? where that Empire of Mahomet, which has so many times raged against thee, for that thou, the defenseless State, didst arrest the pride of its conquests? where the Reformers, who were bent on giving the world a Christianity, in which thou wast to have no part? where the more modern Sophists, in whose philosophy thou wast set down as a system that had been tried, and was a failure, and is now a ruin? and those Kings who are acting the tyrant over thee, and those people that will have liberty independently and at the risk of truth, where will they be in another hundred years? Gone and forgotten as the noisy anger of a torrent; while thou, O holy Church of Rome, built on the immovable rock, wilt be as calm, as young, as unwrinkled as ever. Thy path through all the ages of this world’s duration, will be right as that of the just man; thou wilt ever be the self-same unchanging Church, as thou hast been during the eighteen hundred years past, while everything else under the sun has been but change. Whence this thy stability, but from Him who is very Truth and Justice? Glory be to him in thee! Each year, he visits thee; each year, he brings thee new gifts, wherewith thou mayest go happily through thy pilgrimage; and to the end of time, he will visit thee, and renew thee, not only with the power of that look wherewith Peter was renewed, but by filling thee with himself as he did the ever glorious Virgin, who is the object of thy most tender love, after that which thou bearest to Jesus himself. We pray with thee, O Church, our Mother! and here is our prayer: Come, Lord Jesus! “Thy name and thy remembrance are the desires of our souls: they have desired thee in the night, yea, and early in the morning have they watched for thee.”