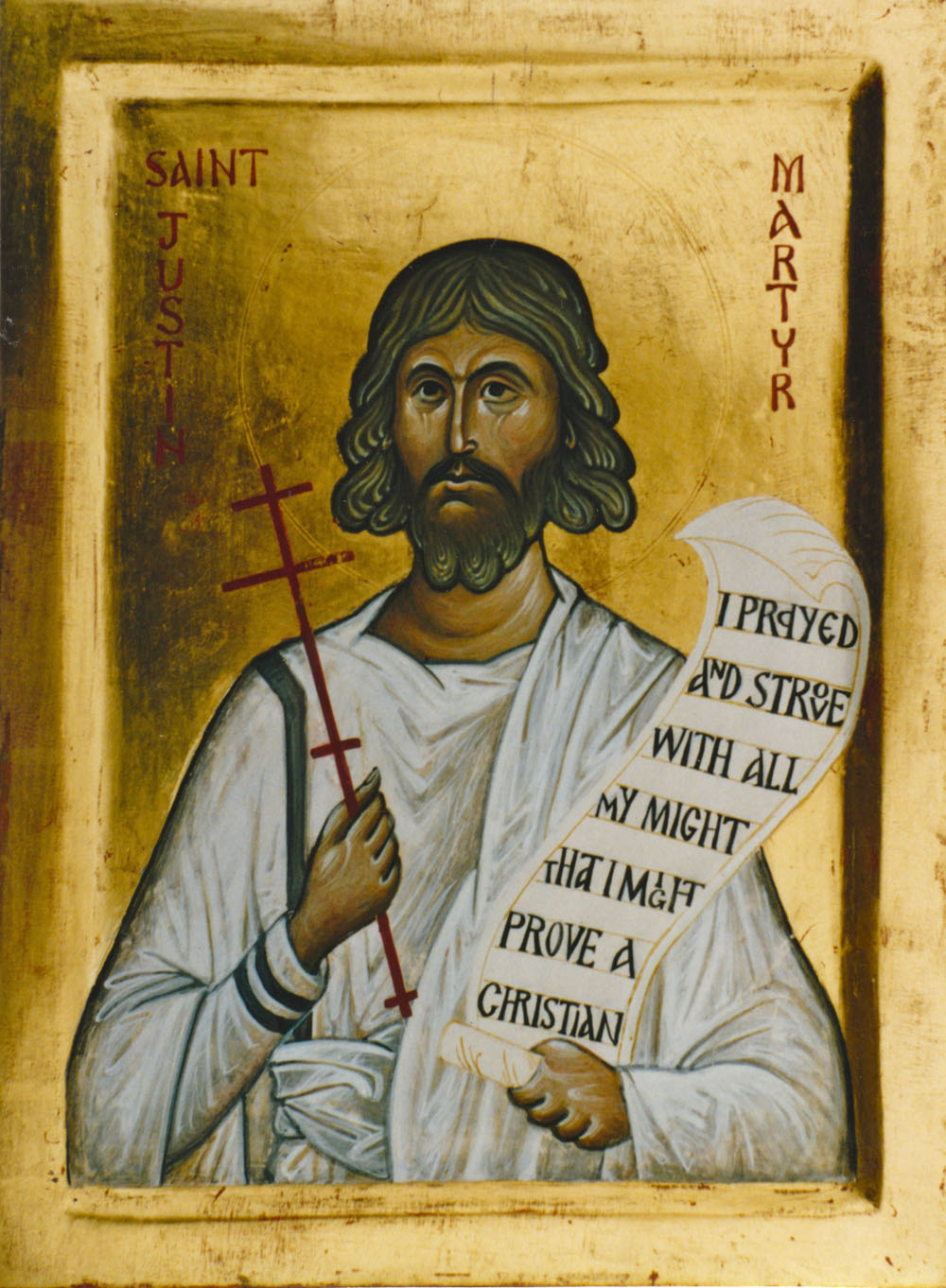 Yesterday Spain sent one of her princes to represent her at the court of the Conqueror of Death. Today Christ receives with equal honor the representative of learning in the service of religion. The philosopher’s mantle worn by Justin is as splendid as the royal purple of Hermenegild, for both prince and philosopher have washed their robes in their own blood, mingled with that of the Lamb, and these robes have become the insignia of their eternal glory. But the victory of Christ’s champions is not felt in heaven only—the blood of the martyrs makes the very earth fruitful. In spite of heresy, Catholic Spain was born from the royal blood of Hermenegild, and paganism, by sacrificing Justin to its own hatred, inspired new vigor into the seed sown in Rome by SS Peter and Paul. On this very day the sacred cycle brings before us SS Valerian, Tiburtius, and Maximus, the glorious triumvirate won to Christ by the immortal Cecily, who embodies so nobly the Roman faith defended with such love and learning by Justin. When she was born, Justin’s public disputations with the adversaries of Christianity were filling Rome with his victorious refutations of paganism. His writings, which he boldly caused to penetrate even to the imperial throne, carried the light to regions which he could not reach by his spoken word. The lictor’s axe, in striking off the head of the apologist, gave more force to his demonstrations than had been given by his powerful logic, when for the first time he overcame the powers of hell and put an end to a fierce persecution.

The world, courted on all sides by a thousand different schools, which by their contradictions seemed bent on making the discovery of truth impossible, was now in a position to recognize sincerity. Marcus Aurelius had succeeded Antoninus Pius, and he claimed to enthrone philosophy in his own person. His ideal of perfection was the satisfaction of self and the contempt of others, and he passed from dogmatic skepticism to the establishment of the Moral Law, delivering his “thoughts” to the admiration of his courtiers without caring for the reformation of their morals. Justin had been seeking truth from boyhood, in order to find justice. He was not discouraged by the ill success of his early efforts, and did not make the delay of the dawn an excuse for denying the existence of the light. When, at God’s chosen time, he found Wisdom, he longed to communicate her to all, little and great, and devoted his life to the work, making naught of the labors and sufferings by which he solemnly confessed his faith before the world. What man of good faith could hesitate to choose between the Christian hero and the crowned sophist who put him to death? Who would not, like Cecily, pour scorn upon the pretensions of those false philosophers who have made themselves masters of the world and who give no proof of their love for wisdom beyond their determination to shut the mouths of those who preach it?

Philosophy, baptized in the blood of this convert, is henceforward Christian forever. Her distressing sterility is at an end. The testimony of martyrdom which she has now given to truth in token of faithful service, atones for all the monstrous offenses of her early years. She will always be distinct from faith, but henceforth she will be the help-meet of this heavenly virtue. Human reason will be strengthened by the alliance and will be able to arrive at trustworthy conclusions. But woe to reason if she forgets her consecration to Christ, ignores the mystery of the Incarnation, and declares herself satisfied with a purely natural explanation of the origin of man, the end of creation, and the Moral Law. The natural light, which enlightens every man that comes into the world, is unquestionably from the Word, and that is its glory. But since the divine Word, in addition to the honor thus done to reason, has given to humanity a higher and more direct manifestation of himself, he does not intend that man should divide his gifts, leave on one side the faith which prepares the way for vision, and content himself with the gleam of light which would have been sufficient for the state of pure nature. The Word is one, as man, to whom he manifests himself, is one; and this manifestation is made at one and the same time, though in different ways, namely, by reason and faith. If man withdraws himself from the supernatural light, which he thought to be his own, and the world will be plunged into unreasoning foolishness.

Let us read the account given by the Church of the martyr-philosopher and give glory to our Risen Lord, whose triumph is enhanced by the consecration to him of all the glory gained by men.

We hail in thee, O Justin, one of the noblest trophies of the divine Conqueror of Death. Thou wast born in the kingdom of darkness, but thou didst early seek to break the chains of falsehood which bound thee like so many others. Thou didst love Wisdom even before thou didst know her, and she too had chosen thee. But she “will not enter into a malicious soul, nor dwell in a body subject to sins.” Many men seek to hide their self-love under the beautiful name of Philosophy, and to find in her an excuse for all their vices; but thou didst seek for knowledge out of a desire to know and love the truth and obey her laws. This purity of heart and mind brought thee near to God and made thee worthy to meet in the ways of life the living Wisdom whom thou art now enjoying in the full light of eternity. The Church has honored thee, and rightly, with the name of the Admirable Philosopher, for thou wast the first to realize that a Philosophy which is worthy of the name—a true love of wisdom—cannot confine its researches within the abstract domain of pure reason; for reason is only the gateway into those higher regions where Wisdom reveals herself in person to the love that seeks her with a sincere heart.

It is written of souls like thee that “the multitude of the wise is the welfare of the whole world.” But true philosophers who, like thee, understand that the aim of the wise man is to attain to the vision of God—to reach the most holy God by the way of obedience—are rare in these days. The independence of reason is the only dogma on which the sophists of the present day are agreed. Their sect is characterized by a false eclecticism, which allows each one to make his own system and choose what most appeals to him out of the positive affirmations of different schools and religions. Thus they proclaim that reason, though supreme in their eyes, has so far produced no trustworthy conclusions, and that the last word of science is skepticism or universal doubt. It is hardly becoming for such men to reproach the Church with despising reason. On the contrary, the Church has but lately, in the Vatican Council, emphasized and exalted the mutual help rendered by faith and reason in leading men to God, and she casts out of her fold those who deny to human reason the power to affirm with certainty the existence of God our Lord and Creator. When seeking to define in these days the respective value of faith and reason, without either separating or confusing them, the Church had but to listen to the testimony of Christian philosophers in all centuries, beginning with thee, for their works, which complete one another, are full of this doctrine.

Thou wast as faithful as thou wert brave, O valiant martyr! In thy day the Church had not been forced by contests with heresy to seek for new terms of expression whose very precision soon became indispensable, but thy writings prove to us that the doctrine was the same though the phraseology was less clear. Be thou blessed by all the children of the Church for this demonstration of the identity of our believe with that of the second century. Be thou blessed for thy careful distinction between that which was dogma to be held by all, and those private opinions on lesser points to which the Church in thy day left liberty as she has ever done.

Do not disappoint the confidence of the Mother of all mankind. Though so many centuries have passed since thy martyrdom, she wishes her children to pay thee greater honor today than they have done in past ages. She was once recognized as queen of the nations, but now her situation is what it was in the days when thou didst defend her against hostile powers. Raise up new apologists. Teach them that the assaults of hell may be repelled by zeal, firmness and eloquence. But they must not have false ideas as to the nature of the combat entrusted to their honor by the Church. They have to defend a queen. The Spouse of the Son of God could never permit her champions to solicit for her the protection accorded to a slave. Truth has its rights—or, rather, it is truth alone that has the right to claim liberty. Our apologists, O Justin, must, like thee, make the State ashamed not to grant to the Church a liberty accorded to all sects. But Christian champions may not rest satisfied with a toleration extended equally to Christ and Satan. They must cry with thee, even when fresh violence is threatened: “Our cause is just, for we, and we alone, speak the truth.”