Saint John a San Facundo, or of Sahagún 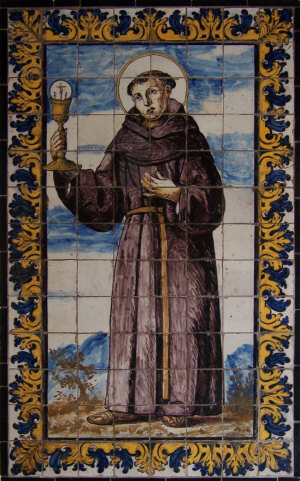 The kingdom which the Apostles have mission to establish upon earth is a reign of peace. Such was the promise pledged by Heaven to earth, on that glorious night wherein was given to us the Emmanuel. And on that other night which witnessed our Lord’s last farewell at the Supper, did not the Man-God base the New Testament upon the double legacy which he bequeathed to his Church, of his sacred Body and Blood, and of this peace announced of yore by Bethlehem’s angels? Yea, a peace unknown till then, here below; a peace all his own, because as he said, it proceeds from him, but still is not himself; this gift substantial and divine is no other than the Holy Ghost in person! Like to some sacred leaven, this peace has been spread amongst us during these Pentecostal days. Men and nations alike have felt the sacred influence. Man at strife with heaven and divided against himself was indeed justly punished for his insubordination to God by the ascendency of the senses in his revolted flesh; but he now sees harmony once again established in his own being, and his appeased God treating as a son the obstinate rebel of former days. The sons of the Most High are to form a new people, stretching their confines unto earth’s furthest bounds. Seated in the beauty of peace, to use the prophet’s expression, this blessed race shall see all nations flocking to its midst, and shall draw down, here below, the good will of heaven, so exquisitely imaged therein.

Whereas formerly nations were constantly at strife, and wreaking vengeance in many a bloody combat that knew no end but in the extermination of the vanquished, once baptized, they recognize each other as sisters, according to the filiation of the Father who is in heaven. Faithful subjects of the one Pacific King, they yield themselves up to the Holy Ghost that he may soften their manners; and if, perforce, war, the result of sin, must needs sometimes come, woefully reminding man of the consequences of the fall, this inevitable scourge will, at least henceforth have some law besides that of might. The right of nations, the right of every Christian who rejects all that savors of pagan antiquity, the faith of treaties, the arbitration of the Vicar of Christ, supreme controller of the consciences of kings, these and only these, can eliminate occasions of bloody discord. Thus there were to be ages in which the “peace of God,” or the “truce of God,” or a thousand such loving artifices of the common mother, would prevail to restrict the number of years and of days, wherein the sword might be allowed to remain unsheathed against human life; were these limits out-stepped the transgressor’s blade would be snapped in twain by the power of the spiritual sword, more dreaded, in those days, than warrior’s steel. Such the potency of the Gospel’s might, that even in these present days of universal decadence, respect for a disarmed foe imposes itself as law on the hottest adversary, so that after a battle, victors and vanquished meeting like brothers, lavish the same cares both corporal and spiritual, on the wounded of either camp;: such the persistent energy of the supernatural leaven which has been working progressive transformation in mankind for eighteen hundred years, and is even still acting upon those who would fain deny its power!

He whom we are honoring today is one of the most glorious instruments of this marvelous conduct of divine Providence. Heaven-born peace mingles her placid ray with the brilliant aureola that wreathes his brow. A noble son of Catholic Spain, he knew how to prepare the future glory of his country, as well as any mailed hero that laid Moor prostrate in the dust. Just as the eight hundred years’ crusade that drove the crescent from Iberian soil, was closing, and the several kingdoms of this magnanimous land were blending together under one scepter, this lowly hermit of Saint Augustine was laying within hearts the foundation of that powerful unity which would inaugurate the glories of Spain’s sixteenth century. When he first appeared, rivalries engendered too easily by a false point of honor, in a nation armed to the teeth, sullied the fair land of Spain with the blood of her sons, slain by Christian hands. As he now stands before us receiving the Church’s homage, we behold discord at his feet, overthrown and vanquished by his defenseless hand.

Let us read this precious life as related in the Liturgy.

O Blessed Saint, well hast thou earned the privilege of appearing in the heavens of holy Church, during these weeks that are radiant with Pentecostal light. Long ago did Isaias thus portray the loveliness of earth, on the morrow of the coming down of the Paraclete: “How beautiful upon the mountains are the feet of them that bring good tidings, and that preach peace: of them that preach salvation that say to Sion: Thy God shall reign!” What the prophet thus admired was the sight of the Apostles’ taking possession of the world in God’s name; but in what did thine own mission differ from theirs thus enthusiastically pictured by the inspired pencil? The same Holy Ghost animated thy ways and theirs; the same Pacific King beheld his scepter by thy hand, made yet more steadfast in its sway over a noble nation of his vast empire. Peace, the one object of all thy labors here below, is now thine eternal recompense in heaven where thou reignest with him. Thou dost now experience the truth of thy Master’s word, when he said of such as resemble thee by working to establish peace, at least within the territory of their own hearts: Blessed are the peace-makers for they shall be called the children of God! Yea, rest then, dear Saint, in thy Father’s inheritance, into which thou hast entered; rest thee, in the beatific repose of the Holy Trinity that inundates thy soul, and may we here, afar off in this chilly earth below, feel something of that genial peacefulness.

Vouchsafe to lavish upon thine own land of Spain, the same succor which, in thy life time was so precious unto her. No longer does she hold that preeminence in Christendom, which became hers, just after thy glorious death. Would that thou couldst now persuade her that never can her greatness be recovered, by lending an ear to the deceptive whisperings of false liberty. But that which could in bygone days render her so strong and powerful, can do so again, if she draw down upon her the benedictions of Him by whom alone kings reign. Devotedness to Christ, that was her glory; devotedness to truth, that was her treasure! Revealed truth is alone that whereby men enter into true liberty:—Truth will make you free. Truth alone is able to bind in unity indissoluble, the many minds and wills that make up a nation: powerful is that bond, for it secures strength to a country beyond her frontiers, and peace to her within. Apostle of peace, remind thine own people, and teach the same to all,—that absolute fidelity to the Church’s doctrines is the sole ground whereon Christians may seek and find concord.