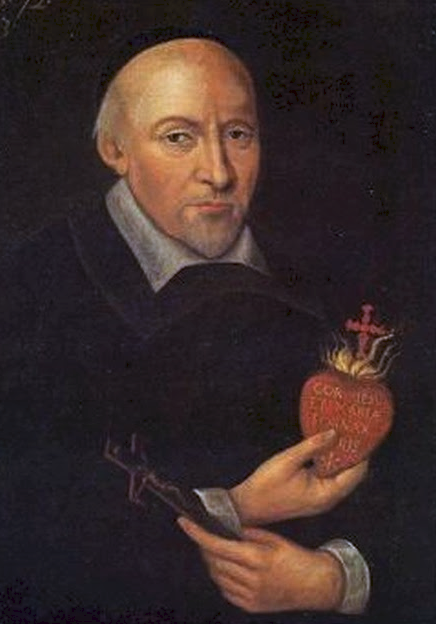 Saint Jean Eudes, forerunner of devotion both to the Sacred Heart and the Immaculate Heart of Mary, was born in 1601, some time after France had been torn apart by the revolt of the Huguenots. The rebels were calmed but relegated to western France by King Henry IV, after he himself returned to the Catholic faith. It was in that region that this young Saint spent his childhood, at Argentan in Normandy, and was educated with the Jesuits of Caen. The father of this first-born of a family of solid and profound virtue, had himself desired the sacerdotal life, and he did not long oppose Jean’s desire to consecrate himself to God as a priest. At eighteen years of age Saint Jean had already composed a treatise on voluntary abnegation, which his confessor obliged him to publish. He was ordained in Paris as a member of the recently founded French Oratory of Saint Philip Neri; his teachers there were Fathers de Berulle and de Condren, two unsurpassed spiritual directors. The governing theme of his meditation, his preaching and his writings was the importance of the redemptive Incarnation of the Son of God, through the intermediary of His Immaculate Mother. Controversy was not lacking in those days, when the Mother of God had been relegated to a very secondary if not insignificant role by the reformers, and Saint Jean did not fear controversy. He chose to study both theology and what we would call debate, as essential preparations for his calling. In those days seminaries were scarce; aspiring future priests themselves sought out the instruction they needed.

At Caen a pestilence broke out and soon decimated the populace, often deprived of spiritual assistance. Jean Eudes offered to care for them in person, and while the scourge lasted slept outdoors in a field, in an old barrel, to protect his brothers in religion from contagion. In 1639 he was named Superior of the Oratory of Caen by Father de Condren, although the Superior General feared that office could interfere with his missions, from which they hoped for great renovation in western France. Nonetheless, from 1638 until 1642, Saint Jean, with his brethren in religion, was engaged in preaching missions in the dioceses of Bayeux and Lisieux, where the bishops encouraged him and soon were praising him highly. The fruits of these missions were rich and long-lived. Father Eudes was a follower of Saint Vincent de Paul in his ardent desire to evangelize the poor folk, so long neglected, and it was to the people that the preaching of the Oratorian missionaries was addressed. Their missions lasted for several weeks. “Otherwise,” said Saint Jean, “we put a bandage on the wound, but do not heal it.” Processions, hymns, little religious plays, special conferences for specific groups, organization of leagues against duels and blasphemy, and visits to the sick occupied the missionaries’ very full days.

Saint Jean Eudes left the Oratory, a Society of priests which he loved sincerely, like other founders who have been in a similar position, because he was called by God to break new ground in establishing a group of priests without religious vows, destined to occupy posts in the new seminaries of France. The Council of Trent had commanded these establishments everywhere, ordaining that priests be formed to head parishes and to establish in each of them a school. Already in 1658 Saint Jean himself had founded four seminaries in Normandy,—at Caen, Coutances, Lisieux and Rouen. Before the Revolution in France, the Eudists had accepted the responsibility for sixteen seminaries or minor seminaries. This required a foundation in depth in theology and all pastoral duties. Some of his former brethren turned against him when he left them, and he met obstacles also when founding in Caen a Congregation of women to raise up poor girls led astray by ignorance or need. The Sisters of Our Lady of Charity founded by Saint Jean, parent body of the Good Shepherd nuns, have done an immense good in many countries. The Congregation of Jesus and Mary has sent missionary priests to several countries, all over the world. Saint Jean Eudes, who died in 1680, was beatified in 1909 by Saint Pius X, and canonized by Pope Pius XI in 1925.