Our Lady, Virgin and Queen 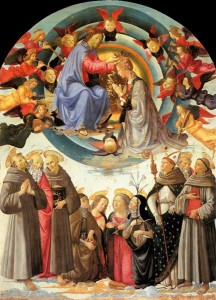 Pope Pius XII was the first Pontiff to create a feast day for the entire Western Church in honor of the Queenship of Mary, which he unveiled in an encyclical, Ad Cæli Reginam, which he released on October 11, 1954—just as his predecessor, Pius XI, announced the Feast of the Kingship of Christ in Quas Primas. But the topic had been on his mind for quite some time. In a radio broadcast to the Portuguese people on May 13, 1946, the Pontiff declared that:

He, the Son of God, reflects on His heavenly Mother the glory, the majesty and the dominion of His kingship, for, having been associated to the King of Martyrs in the unspeakable work of human Redemption as Mother and cooperator, she remains forever associated to Him, with a practically unlimited power, in the distribution of the graces which flow from the Redemption. Jesus is King throughout all eternity by nature and by right of conquest: through Him, with Him, and subordinate to Him, Mary is Queen by grace, by divine relationship, by right of conquest, and by singular choice [of the Father]. And her kingdom is as vast as that of her Son and God, since nothing is excluded from her dominion.

He began the encyclical with the stirring words: “From the earliest ages of the Catholic church a Christian people, whether in time of triumph or more especially in time of crisis, has addressed prayers of petition and hymns of praise and veneration to the Queen of Heaven. And never has that hope wavered which they placed in the Mother of the Divine King, Jesus Christ; nor has that faith ever failed by which we are taught that Mary, the Virgin Mother of God, reigns with a mother’s solicitude over the entire world, just as she is crowned in heavenly blessedness with the glory of a Queen.”

In the course of this encyclical, Pius XII made it clear that “In this matter We do not wish to propose a new truth to be believed by Christians, since the title and the arguments on which Mary’s queenly dignity is based have already been clearly set forth, and are to be found in ancient documents of the Church and in the books of the sacred liturgy.” He went on to trace the practice back to the Fathers of the Church. Citing Popes, Councils, Saints, and liturgies East and West, the rosary, and even artwork, the Pontiff showed clearly both the antiquity and the authority behind the idea of Mary’s Queenship over all.

This status, he explained, was based upon several distinct but inseparable foundations: her royal descent from the House of David, her Divine Motherhood, and her ongoing work in our personal salvation. Therefore, “Let all Christians, therefore, glory in being subjects of the Virgin Mother of God, who, while wielding royal power, is on fire with a mother’s love.” To mark this essential truth, he dedicated May 31 as the feast of the Queenship of Mary.

The four Marian antiphons or hymns of the Divine Office each refer to Mary’s Queenship: the Salve Regina, Ave Regina Cælorum, Alma Redemptoris Mater, and Regina Cæli. The last section of the Litany of Loreto is taken up with invocations of the Virgin as Queen—of Angels, Patriarchs, Prophets, Apostles, Martyrs, Confessors, Virgins, Saints, conceived without original sin, assumed into heaven, of the most holy Rosary, and of peace. The first of these is especially worth thinking about, for Mary’s reign over the angels was signified by the honor and deference the Archangel St. Gabriel showed her when announcing her conception of Jesus.