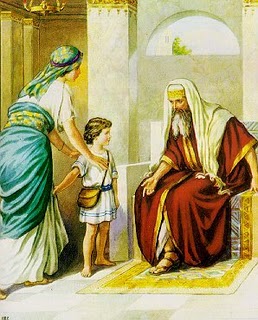 Wherever the solemn celebration of Corpus Christi is observed on the Sunday, one high Mass is celebrated as on the feast itself, with commemoration and last Gospel of the second Sunday. After this Mass the procession takes place.

For the feast of Corpus Christi, the Church has chosen the Thursday between the Sunday on which she speaks of God’s mercy towards men and the consequent duty of fraternal charity among Christians (First Sunday after Pentecost), and this Sunday when she resumes the same thread of thought (Epistle) and presents the Kingdom of Heaven in the form of the Parable of the Supper (Gospel); this Mass was in existence, composed of its present parts before Corpus Christi was instituted.

Nothing could be more appropriate to the Blessed Eucharist, as the banquet where all souls are united by love to Christ their Spouse and to all the members of His mystical body; no time could have been chosen better than when the history of Samuel is being read in the breviary; Samuel who was consecrated to God from his earliest childhood to dwell near the Ark of the Lord and to become priest in the sanctuary of the Most High.

In the liturgy for this season we see how this young child, offered to God by his mother, served the Lord in the Temple with a pure heart and nurtured himself on God’s truth.

In those days, Samuel tells us, the word of the Lord was precious … there was no manifest vision; for Heli was at the same time proud and weak; and his two sons Ophni and Phinees were faithless to God and slack in His service. Yet at that very moment the Lord revealed Himself to the child Samuel, for as our Lord tells us, He reveals Himself to “little ones,” and hides Himself from the proud.

“It is to the humble,” says St. Gregory, “that the secrets of the divine plan have been revealed, and that is why Samuel was called as a child.” God foretold to Samuel the punishment which would fall on Heli and his house, and as a matter of fact soon after, the Ark was taken by the Philistines, Heli’s two sons were killed and Heli himself died. Moreover almighty God had withheld his revelations from the high priest, because he and his sons made too little of heavenly joys, symbolized by “the great supper” spoken of in today’s Gospel, and were more attached to the delights of the body than of the soul.

Applying to them a passage from St. Gregory in today’s homily we may say that they “had reached a state in which they had lost all appetite for interior joys, for the very reason that they had held aloof from them and had long lost the habit of relishing them. Since they were not willing to enjoy interiorly the sweetness offered them, they loved the hunger that came upon them from without.”

Heli’s sons had in fact been taking the meats offered to God and eating them themselves and Heli, their father had let them go their own way. It was in divine consolations alone that Samuel, who had always lived with Heli in the Temple, found his delight. The food of which he partook was that supplied by God Himself, when He told him His secrets in contemplation and prayer. “The child slept, which means,” says St. Gregory, “that his soul was at rest without care for earthly things.” The saint explains in his commentary on today’s Gospel that “the joys of the body which kindle in us beforehand an ardent desire for their possession, soon bring disgust upon him who tastes them, by the very fact of his satiating himself with them, while on the contrary, spiritual joys arouse contempt before they are possessed, but stir up desire for them when once they have been obtained; so that he who has tasted them is the hungrier, the more he is fed.”

And this explains how souls who find all their delight in the pleasures of this world refuse to share in the banquet of the Christian Faith, wherein the church nourishes all with the teaching of the Gospel. “Taste and see,” continues St. Gregory, “that the Lord is sweet.” By these words the Psalmist expressly tells us: You do not know His sweetness if you do not taste it, but touch the food of life with the palate of your heart, that experiencing His graciousness you may be able to love Him.

Man lost these delights when he sinned in paradise, out of which he came when he had closed his lips to the food of eternal sweetness. It follows from this that having been born in the pains of this exile, we reach such a state of disgust with our life here below, that we no longer know what we ought to desire.
—Matins, Lesson VIII

But by the grace of the Holy Ghost, “we have passed from death unto life,” so that, like humble little Samuel, we, the weak, the poor, and the lame of the Gospel should seek our joys near our Lord’s tabernacle and in intimate communion with Him. We must avoid pride and earthly things that we may be instructed in the fear and love of Gods Holy Name (Collect), and thus constantly directed by Him “our life on earth may more and more be likened to that of heaven,” that “it may be vouchsafed to us who have received the sacred gifts, that the more often we assist at the celebration of these divine mysteries, the more surely they may avail to the salvation of our souls” (Postcommunion).