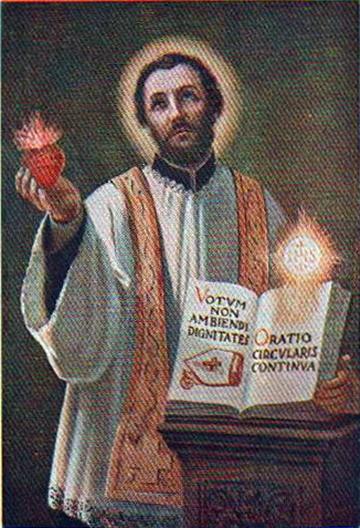 At 22, Francis developed a skin disease similar to leprosy, and his case was thought to be hopeless. He vowed that if he recovered, he would devote his life to God and to serving others. His speedy recovery was thought to be miraculous.

He went to Naples to study for the priesthood and, after his ordination, joined the confraternity Bianchi della Giustizia (the white robes of Justice), devoted to the care of prisoners and who prepared them to die a holy death.

In 1588, Fr. John Augustine Adorno, a Genoese, set out to found an association of priests who would combine the active life of pastoral work and the strictest possible discipline to encourage contemplative life. A letter inviting the cooperation of another Ascanio Caracciolo was mistakenly delivered to Francis, rather than his distant kinsman. Agreeing with Adorno’s vision, Francis felt that God must have misdirected the letter to him. Francis wished to join Adorno, offered his help, and the two made a 40-day retreat to draw up the rules for the proposed order.

When they had gathered 12 followers, they went to Rome to obtain approval from Pope Sixtus V who approved their new order, the Minor Clerks Regular, on June 1, 1588. They did missionary work and cared for the sick and prisoners. The next year, Caracciolo made his solemn profession and took the name of Francis, in honor of St. Francis of Assisi. The company settled in a house in the suburbs of Naples, and Francis and Adorno travelled to Spain, in keeping with the pope’s wishes that they establish themselves there.

The court of Madrid refused permission for the house, however, and they were forced to return. They were shipwrecked on the way back, and by the time they arrived in Naples, their foundation had flourished and was unable to contain all those who wished to join it. They were invited to take over the monastery of Santa Maria Maggiore, whose former superior, Fabriccio Caracciolo, had joined their order.

The Minor Clerks Regular worked mostly as missioners, but some worked in hospitals and prisons. Hermitages were provided for those who wished solitude. Perpetual adoration of the Blessed Sacrament is one of the main duty of the order.

Francis contracted a serious illness; soon after his own recovery, Adorno died at the age of 40. Against his wishes, Francis was named superior, but he swept rooms, made beds, and washed up in the kitchen just as the others did. During his life, he refused several bishoprics because the Minor Clerks Regular took a fourth vow: Never to seek any office or dignity either within the order or outside it. Returning to Spain in 1595 and 1598, Francis successfully founded houses in Madrid, Valladolid, and Alcalá.

After seven years as superior, he obtained permission from the pope to resign and became prior of Santa Maria Maggiore and master of the novices. In 1607, he gave up his administrative duties for a time of contemplation to prepare for death. He lived in a recessed area beneath the staircase of a Neapolitan house, where he was often found in ecstasy.

Meanwhile, St. Philip Neri offered the Minor Clerks Regular a house at Agnone in the Abruzzi, and Francis was asked to help with the new establishment. He travelled there but he soon developed a fever, which rapidly worsened. While feverish, he dictated a letter in which he exhorted his brethren to remain faithful to the rule. He fell into meditation. An hour before sunset, he cried out, “To Heaven!” A moment later, he died on this day in 1608. Miracles, ecstasies, and prophecies have been attributed to him and one year short of two centuries later he was canonized in 1807 by Pope Pius VII.