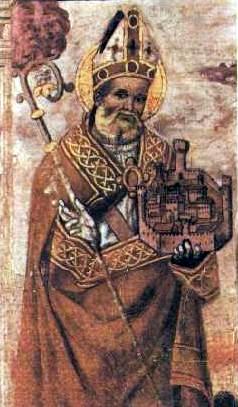 In order to honor her Eternal High Priest, the Church presents to him this day the merits of a Pontiff who, after his mortal career, was admitted into a happy Immortality. Ubaldus, here on earth, was the image of our Lord Jesus Christ. Like his Divine Master, he received the holy Anointing of Priesthood; he was a Mediator between God and man; he was the Shepherd of a flock; and now, he is united with our Risen Jesus—the great Anointed, the Mediator, the Shepherd. In proof of his influence in heaven, our Ubaldus has had given to him a special power against the wicked Spirits, who lay snares for our perdition. It has frequently happened that the simple invocation of his name has sufficed to foil their machinations. It is with the view of encouraging the Faithful to have recourse to his protection that the Church has fixed this day as his feast.

Let us now read the account she gives of the virtues of the saintly Bishop.

O blessed Pontiff! be thou our protector against the spirits of hell. They are devoured by envy at seeing how Man, that lowly and feeble creature, has become the object of God’s predilection. The Incarnation of the Son of God, his Death on the Cross, his glorious Resurrection, the Sacraments which give us the life of Grace—all these sublime means, whereby the infinite goodness of God has restored us to our lost dignity, have excited the rage of the old enemy, and he seeks revenge by insulting, in us, the Image of our Creator. At times, he attacks man with all the frenzy of angry jealousy. To mimic the operations of Sanctifying Grace—which, so to speak, makes us the instruments of God’s good pleasure—Satan sometimes takes possession of our fellow creatures, and makes them his slaves. Thy power, O Ubaldus, has often manifested itself by rescuing these unhappy victims of the devil’s jealousy; and holy Church, on this day, celebrates the special prerogative conferred on thee by our Heavenly Father. Relent not in the exercise of thy charitable office. And yet, O holy Pontiff, thou knowest that the snares of the wicked spirits are more injurious to the souls than to the bodies of men. Have pity, then, on the unhappy slaves of sin, who, though the divine Sun of the Pasch has risen upon them, are still in the darkness of guilt. Pray for them, that they may become, once more, Children of the Light, and share in the Easter Resurrection which Jesus offers to all.