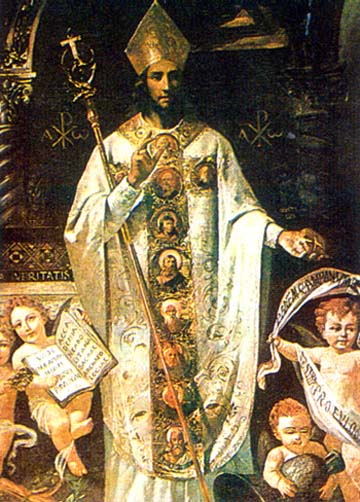 Pontius Meropius Paulinus was born ca. 352 at Bordeaux, in southwestern France. He was from a notable senatorial family with estates in the Aquitaine province of France, northern Spain, and southern Italy. He was educated in Bordeaux, where his teacher, the poet Ausonius, also became his friend. At some time during his boyhood he made a visit to the shrine of St Felix at Nola near Naples.

His normal career as a young member of the senatorial class did not last long. In 375 the emperor Gratian succeeded his father Valentinian. Gratian made Paulinus suffect consul at Rome ca. 377, and appointed him governor of the southern Italian province of Campania ca. 380-1, but in 383 Gratian was assassinated at Lyon, France, and ca. 384 Paulinus returned to Bordeaux. There he married a Spanish Christian woman named Therasia. Paulinus himself became a Christian and was baptized ca. 389 by Bishop Delphinus of Bordeaux. Shortly afterwards, his wife and he moved to their estates in Spain. When they lost their first child, a boy, only eight days after birth, the couple decided to live a secluded religious life.

In 393 or 394, after some resistance from Paulinus, he was ordained a presbyter on Christmas day by Lampius, Bishop of Barcelona. (This was similar to what happened with Saint Augustine of Hippo, who had been ordained against his protestations in the year 391 at the behest of a crowd cooperating with Bishop Valerius in the north African city of Hippo Regius.) However, there is some debate as to whether the ordination was canonical, since he received ordination “at a leap” (per saltum), without receiving minor orders first.

Paulinus refused to remain in Barcelona, and in late spring of 395 he and his wife moved from Spain to Nola in Campania, where he remained until his death. Paulinus credited his conversion to Saint Felix, who was buried in Nola, and each year would write a poem in honor of the saint. He and Therasia also rebuilt a church commemorating St Felix. During these years Paulinus engaged in considerable epistolary dialogue with Saint Jerome among others about monastic topics.

Therasia died some time between 408 and 413, and shortly afterwards Paulinus received episcopal ordination.

Paulinus died at Nola on 22 June 431. The following year the presbyter Uranus wrote his De Obitu Paulini (in Latin, PDF), an account of the death and character of the saint.

From the eleventh century they rested at the church of Saint Adalbert, now Saint Bartholomew, on the island in the Tiber in Rome; in 1908 Pope Pius X permitted them to be translated to the new Cathedral at Nola, where they were reinterred on May 15, 1909.

The bones are now found in the Church of the Holy Apostle Bartholomew, in the small Sicilian city of Sutera, where they dedicate a feast day, and conduct a procession for the saint at Easter each year.