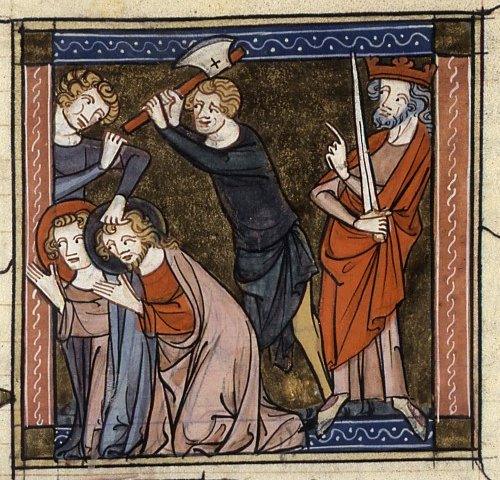 Roses and lilies are exquisitely alternated in the wreath woven by centuries, for the Bride of the Son of God. Though the world be heedless of the fact, it is none the less true that everything here below has but one object, namely to bedeck the Church with the attractive charms of heaven, to adjust her jeweled robes formed of the virtues of her saints, that she may be fitted to take her seat beside her Diving Spouse in the highest heavens for all eternity. The sacred cycle, in its yearly course, presents an image of those ceaseless labors whereby the Holy Ghost continues to form, up to the day of the eternal nuptials, that varied robe of holy Church, by diversifying the merits of God’s servants, her members here below. Today, we have two Martyrs becrimsoned with their own blood, setting off the dazzling whiteness of Norbert’s works, or of William’s innocence; and tomorrow we may contemplate with delighted gaze the softer light beamed upon our earth by Margaret, Scotland’s Pearl.

Primus and Felician, wealthy Romans, had already attained maturity of age when our Lord made his voice heard inviting them to forsake their vain idols. Brothers according to the flesh, they now became more really so, by fidelity to the same call of grace. Together, they proved themselves intrepid helpers of the confessors of Christ amidst the atrocious persecution which raged against the Church during the latter half of the Third Century. In the same combat were they to fall side by side, exchanging this frail life here below for that into which, at one birth, they were to enter forever in heaven. They furthermore were honored by having their precious relics placed in the celebrated sanctuary consecrated to Saint Stephen, the Proto-Martyr, on Monte Cœlio, and there form its richest treasure.

The holy Liturgy relates their triumph in these few lines:

O ye brave veterans of the Lord’s battles, teach us what energy we must bring to the service of God, whatsoever be our age. Less favored than we are, ye came late in life to the knowledge of the Gospel and of those inestimable treasures promised to the Christian. But in holy Baptism your youth was renewed as that of the eagle, and for thirty years, the Holy Ghost continued to produce rich fruits in you. When, in extreme old age, the hour of final victory at last sounded, your courage was equal to that of the most vigorous warriors. You were nerved up to such heroism and sustained therein, through prayer constantly kept alive within you by the words of the Psalms, as your Acts attest. Revive then amongst us faith in the word of God; His promises will make us despise, as ye did, this present life. Lead our piety back to those true sources which strengthen the soul—the knowledge and daily use of those sacred formulæ, which bind our earth unfailingly to heaven whence they were brought down to us.