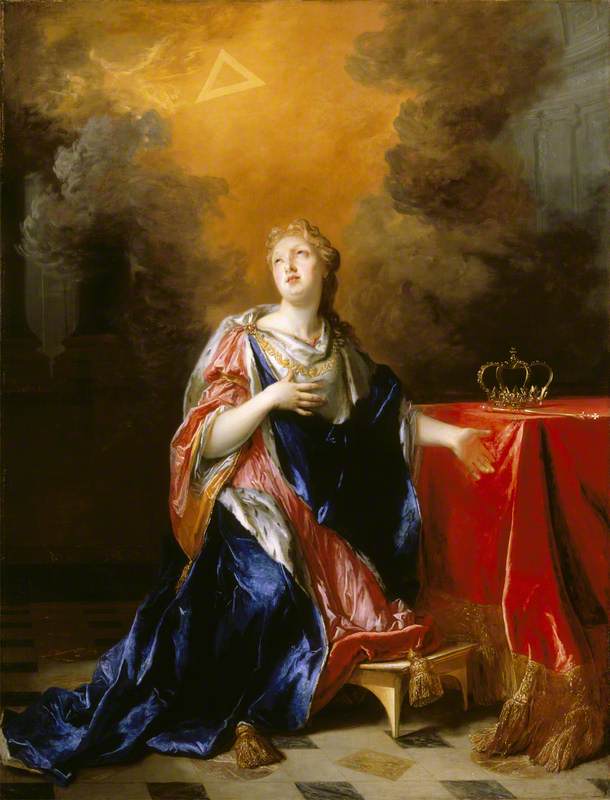 One week has elapsed since the day on which we beheld Clotilde arise, and from yonder land of France won over to Christ by her, make known to the whole world, what is the special role of woman beside the cradle of a nation. Until Christianity came, man altogether lowered in his own person and in the social order, by the consequences of sin, was wholly ignorant of the grandeur of the divine intention, in this respect; philosophy and history never dreamed it possible that maternity could be raised to such heights. But since the Holy Ghost has been given to man to instruct him, both theoretically and practically, in all truth, examples have been multiplied whereby the wondrous vastness of the divine plan has been clearly set forth, strength and sweetness herein presiding, as ever, at the counsels of Eternal Wisdom.

Scotland had long been Christian, when Margaret was given to her, not to lead her to the baptismal font, but to establish, amidst a population so diversified and so often at mutual enmity, as was hers, that unity which makes a Nation. Ancient Caledonia defended by her lakes, mountains, and rivers, had, up to the fall of the Roman empire, kept her independence. But while herself inaccessible to invading troops, she had become the refuge of the vanquished of every race, and the proscribed of every epoch. Many an advancing wave that had paused and crouched at the feet of her granite frontiers had swept pitilessly over the Southern provinces of the great British island. Britons, Saxons, and Danes in turn, dispossessed and driven from their homes, fleeing northwards had successively crept in, and settling down, as best they might, had maintained their own customs, in juxtaposition with those of the first inhabitants, adding consequently their own mutual jealousies to the inveterate divisions of the Picts and Scots. But from the very evil itself, the remedy was to come. God, in order to show that he is master of revolutions, just as he is of the surging waves, was about to confide the execution of his merciful designs upon Scotland, to such casual instruments as a storm or a political overthrow may sometimes prove to be.

At the opening of the eleventh century, Danish invasion had driven from the English shore the sons of the Saxon king, Edmund Ironside. The crowned apostle of Hungary, Saint Stephen I, generously received the fugitives at his court, welcoming in these helpless children, the great-nephews of a Saint, namely Edward the Martyr. To the eldest, he gave his own daughter in marriage, and the second he affianced to the niece of St. Henry, Emperor of Germany. Of this last mentioned union, were born three children, Edgar, surnamed Atheling, Christian afterwards a nun, and Margaret whose feast the Church is keeping today. Ere long by the turning tide of fortune, the exile once more returned to their country and Edgar was brought to the very steps of the English throne. For in the meanwhile, the scepter had passed from the Danish princes, back again to the Saxon line, in the person of their uncle, Saint Edward the Confessor, and by very birth-right, seemed destined to pass ultimately to Edgar Atheling. But almost immediately after their return from exile, the death of St. Edward and the Norman conquest, again banished the royal Saxon family. The ship bearing these noble fugitives, bound for the continent, was driven in an opposite direction by a hurricane, and stranded on the Scottish shore. Edgar Atheling, despite the efforts of the Saxon party, was never to raise up the fallen throne of his sires; but his sister, the Saint of this day, made conquest of the land whither the storm, God’s instrument, had carried her.

Having become the wife of Malcolm III, her gentle influence softened the fierce instincts of the son of a Duncan, and triumphed over the barbarism still so dominant in those parts of the country, as to separate them utterly from the rest of the known world. The fierce highlander and haughty lowlander, reconciled at last, now followed their gentle queen along hitherto unknown paths, thrown open by her to the light of the Gospel. The strong now bent him down to meet the weak or the poor; and all alike, casting aside the rigidity of their hardy race, let themselves be captured by the alluring charms of Christian charity. Holy penitence resumed its rights over the gross instincts of mere nature. The frequentation of the sacraments once more brought into esteem, produced seasonable fruits. Everywhere, whether in Church or in state, abuses vanished. The whole kingdom became one family, whereof Margaret was called the Mother; for Scotland was born by her to true civilization. David I (inscribed like his mother in the catalogue of Saints) completed the work begun by her; and another child of Margaret’s, alike worthy of her, Matilda of Scotland, surnamed the “good Queen Maude,” was married to Henry I of England; and thus, an end was put on the English soil, to the persistent rivalries of victors and vanquished, by this admixture of Saxon blood with the Norman race.

The following are the words given in the Liturgy, concerning Saint Margaret:

We hail thee, O Queen, truly worthy of the praises lavished upon thee by posterity, among the most illustrious of sovereigns! Power, in thy hands, became an instrument of rescue for an entire population. Thine earthly passage marks the meridian of true light for Scotland. Yesterday, holy Church commemorated in her Martyrology, him who was thy precursor in this far-off land, Colum-kille, who leaving Ireland, in the sixth century, had borne the faith thither. But Christianity crippled in its soarings, by diverse combined circumstances, could produce scarcely any of its civilizing effects on the then inhabitants of the land. Only a Mother could perfect the supernatural education of the nation. The Holy Ghost who had chosen thee, O Margaret, for the task, prepared thy maternity in the midst of tribulation and anxiety: thus had he acted in the case of Clotilde; thus does he ever act in the case of mothers. How mysterious and hidden did not the ways of Eternal Wisdom seem, as realized in thy person! Thy birth in exile, far from the land of thy sires; thy return home; then fresh misfortunes; then the tempest at sea; and at last, thy being cast despoiled of everything, upon the crags of an unknown coast; what a list of disasters, and who among the worldly wise would ever have dreamed that herein was the direct course of a merciful Providence, to make the combined violence of men and the elements, serve the sweet purpose of His designs in thy regard! Yet so it was; and this was the very way thou wast moulded into the valiant woman, raised in all thy loftiness above the deceits of this present life, and wholly fixed on God, the one supreme Good, alone untouched by earth’s revolutions.

Far from becoming either soured or dried up by suffering, thy heart firmly anchored, beyond the influence of this world’s ebb and flow, on unshaken and Eternal Love, was ever up to the mark, in foresight and in devotedness, such as was needed to hold thee always at the height of the mission destined for thee. Wherefore, thou wast indeed that treasure worthy of being sought from the uttermost coasts; that merchant ship bringing bread from afar, and all good things to the favored shore on which she is cast. Yea, fortunate indeed were thy land of adoption, had she never forgotten thy teaching and example! Happy thy descendants, had they ever remembered that the blood of saints flowed in their veins! Yet, worthy of thee in death was at least the last Queen of Scots, as she bowed beneath the heads-man’s axe, a brow faithful to her baptism up to her last breath. But, alas, the unworthy son of Mary Stuart, by a policy as false as it was sacrilegious, abandoned at once both the Church and his own mother. Thenceforth heresy blighted the noble stem whence so many kings had sprung; and this at the very moment when England and Scotland were first united under one scepter’s sway! Nor may the treason of a James I, be redeemed by the fidelity of a second James, to the faith of his fathers! O Margaret, thy throne is firmly fixed forever in the eternal kingdom; but abandon not thine own England, the land of thy sires, nor Scotland still more thine own, of which Holy Church has declared thee patroness. The Apostle Andrew shares with thee the rights of patronage: in concert with him, then, preserve those who have been steadfast in fidelity, multiply converts to the ancient faith, and prepare the way for a speedy gathering of the whole flock into the fold of the one Shepherd.