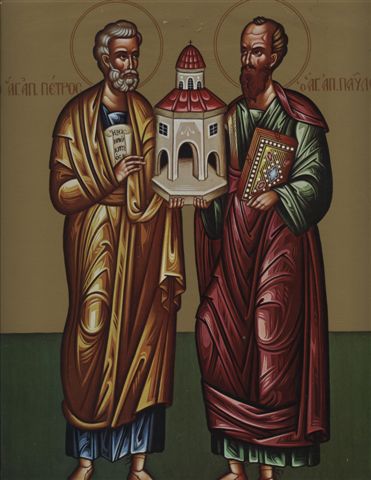 Simon, son of John, lovest thou me? Behold the hour when the answer which the Son of Man, exacted of the Fisher of Galilee, re-echoes from the seven hills and fills the whole earth. Peter no longer dreads the triple interrogation of his Lord. Since that fatal night wherein before the first cock-crow, the Prince of the Apostles had betimes denied his Master, tears have not ceased to furrow the cheeks of this same Vicar of the Man-God; lo! the day when, at last, his tears shall be dried! From that gibbet whereunto, at his own request, the humble disciple has been nailed head downwards, his bounding heart repeats, now at last without fear, the protestation which ever since the scene enacted on the brink of Lake Tiberias, has been silently wearing his life away: Yea, Lord; Thou knowest that I love Thee!

When regenerated man was confided to Simon, son of John, by the Incarnate God, His chief care was, in the first place, to make sure that he would indeed be the Vicar of His love; that, having received more than the rest, he would love more than all of them; that being the inheritor of the love of Jesus for His own who were in the world, he would love, as He had done, even to the end. For this very reason, the establishing of Peter upon the summit of the hierarchy coincides in the Gospel narrative with the announcement of his martyrdom; Pontiff-king, he must follow even unto the cross, his Supreme Hierarch.

The Feasts of his two Chairs, that of Antioch and that of Rome, have recalled to our minds the Sovereignty whereby he presides of the government of the whole world, and the Infallibility of the doctrine which he distributes as food to the whole flock; but these two feasts, and the Primacy to which they bear witness on the sacred cycle, call for that completion and further sanction afforded by the teachings included in today’s festival. Just as the power received by the Man-God from his Father and the full communication made by him of this same power to the visible Head of his Church, had for its end the consummation of glory, the one object of the Thrice-Holy God in the whole of his work; so likewise, all jurisdiction, all teaching, all ministry here below, says Saint Paul, has for end the consummation of the Saints; which is but one with the consummation of this sovereign glory; now, the sanctity of the creature, and the glory of God, Creator and Savior, taken together, find their full expression only in the Sacrifice which embraces both Shepherd and flock in one same holocaust.

It was for this final end of all pontificate, of all hierarchy, that Peter, from the day of Jesus’s Ascension, traversed the earth. At Joppa, when he was but opening the career of his apostolic labors, a mysterious hunger seized him: Arise, Peter; kill and eat, said the Spirit; and at that same hour, in symbolic vision were presented before his gaze all the animals of earth and all the birds of heaven. This was the gentile world which he must join to the remnant of Israel, on the divine banquet-board. Vicar of the Word, he must share His vast hunger; his preaching, like a two-edged sword, will strike down whole nations before him; his charity, like a devouring fire, will assimilate to itself the peoples; realizing his title of Head, the day will come when as true Head of the world, he will have formed (from all mankind, become now a prey to his avidity) the Body of Christ in his own person. Then like a new Isaac, or rather, a very Christ, he will behold rising before him the mountain where the Lord seeth, awaiting the oblation.

Let us also “look and see;” for this future has become the present, and even as on the great Friday, so now, we already know how the drama is to end. A final scene all bliss, all triumph: for herein deicide mingles not its wailing note to that of earth’s homage, and the perfume of sacrifice which earth is exhaling, does but fill the heavens with sweet gladsomeness. Divinized by virtue of the adorable Victim of Calvary, it might indeed be said, this day, that earth is able now to stand alone. Simple son of Adam as he is by nature, and yet nevertheless true Sovereign Pontiff, Peter advances bearing the world: his own sacrifice is about to complete that of the Man-God, with whose dignity he is invested; inseparable as she is from her visible Head, the Church likewise invests him with her own glory. Far from her now the horrors of that mid-day darkness, which shrouded her tears when, for the first time, the cross was up-reared. She is all song; and her inspired lyric celebrates “the beauteous Light Eternal that floods with sacred fires this day which openeth out unto the guilty a free path to heaven.” What more could she say of the Sacrifice of Jesus Himself? But this is because by the power of this other cross which is rising up, Babylon becomes today the Holy City. The while Sion sits accursed for having once crucified her Savior, vain is it, on the contrary, for Rome to reject the Man-God, to pour out the blood of his Martyrs like water in her streets. No crime of Rome’s is able to prevail against the great fact fixed forever at this hour: the cross of Peter has transferred to her all the rights of the cross of Jesus; leaving to the Jews the curse, she now becomes the true Jerusalem.

Such being then the meaning of this day, it is not surprising that Eternal Wisdom should have willed to enhance it still further, by joining the sacrifice of Paul to that of Peter. More than any other, Paul advanced by his preachings the building up of the body of Christ. If on this day, holy Church has attained such full development as to be able to offer herself, in the person of her visible Head, as a sweet smelling sacrifice, who better than Paul may deservedly perfect the oblation, furnishing from his own veins the sacred libation? The Bride having attained fulness of age, his own work is likewise ended. Inseparable from Peter in his labors by faith and love, he will accompany him also in death; both quit this earth, leaving her to the gladness of the divine nuptials sealed in their blood, whilst they ascend together to that eternal abode wherein that union is consummated.

The Antiphons and Capitulum of First Vespers take us back to the opening days of the apostolic ministry. They place us in the midst of those which immediately follow the Descent of the Holy Ghost. Peter and John go up together to the temple of Jerusalem. Calvary’s sacrifice has put an end to its figurative oblations; but it, nevertheless, still continues to be a place of prayer, pleasing to heaven, on account of its grant memories. At the door of aht sacred edifice, a man, lame from his birth, begs an alms of the Apostles. Peter, lacking both silver and gold, exerts in his favor the power of healing which he possesses in the name of Jesus Christ of Nazareth. The Synagogue yields no more to the miracles of the disciple than she did to those of the Master; she will not be converted; and presently a new Herod, wishing to please the Jews, finds no better means of doing so than the putting to death of James the brother of John, and the imprisoning of Peter. But the angel of the Lord comes down into the prison where he is sleeping, on the eve of the day fixed for his death; the angel bids him arise, put on his garments, and follow him. The Apostle, set free, proclaims the reality of that which at first he thought but a dream. He departs from Jerusalem, now hopelessly the accursed city; and on all sides of the gentile world into whose midst he has entered, is verified the prophecy: Tu es Petrus: Thou art Peter, and upon this Rock I will build my Church.

Although touched up in the 17th century, according to the taste of that age, the Hymn referenced earlier magnificently expresses the glories of this day. This song of triumph was composed by Elpis, a Sicilian lady, aunt of St. Placid, Martyr, and wife of the Senator Boetius, the most illustrious representative of the gens Anicia, had not that family given to the Church at the same period the great Saint Benedict. The third Strophe, which in majestic strain hails the Queen-City, is taken (with a few modifications) from another poem attributed to St. Paulinus of Aquilæia, and was added to the work of Elpis by the immortal Pontiff St. Pius V.