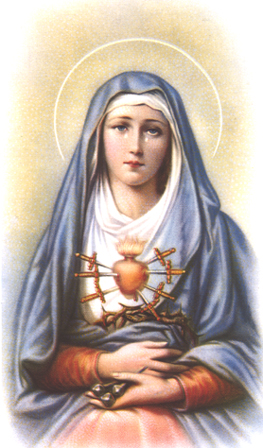 Even in the seventeenth century, the Servites had the privilege of possessing this second feast, which they celebrated as a double of the 2nd Class, with a Vigil and an Octave. It is from them that the Church has borrowed the Office and Mass. This honor and privilege was due to the Order established by Our Lady to honor her sufferings and to spread devotion to them. Philip Benizi, heir to the seven holy Founders, propagated the flame kindled by them on the heights of Monte Senario; thanks to the zeal of his sons and successors, the devotion to the Seven Dolors of the Blessed Virgin Mary, once their family property, now the treasure of the whole world.

Oh, the greatness of our Judith among all creatures! “God,” says the pious and profound Father Faber, “vouchsafed to select the very things about him which are most incommunicable, and in a most mysteriously real way communicate them to her. See how he had already mixed her up with the eternal designs of creation, making her almost a partial cause and partial model of it. Our Lady’s cooperation in the redemption of the world gives us a fresh view of her magnificence. Neither the Immaculate Conception nor the Assumption will give us a higher idea of Mary’s exaltation than the title of co-redemptress. Her dolors were not necessary for the resurrection of the world, but in the counsels of God they were inseparable from it. They belong to the integrity of the divine plan. Are not Mary’s mysteries Jesus’ mysteries, and his mysteries hers? The truth appears to be that all the mysteries of Jesus and Mary were in God’s designs as one mystery. Jesus himself was Mary’s sorrow, seven times repeated, aggravated sevenfold. During the hours of the Passion, the offering of Jesus and the offering of Mary were tied in one. They kept pace together; they were made of the same materials; they were perfumed with kindred fragrance; they were lighted with the same fire; they were offered with kindred dispositions. The two things were one simultaneous oblation, interwoven each moment through the thickly crowded mysteries of that dread time unto the Eternal, out of two sinless Hearts, that were the Hearts of Son and Mother, for the sins of a guilty world which fell on them contrary to their merits, but according to their own free will.”