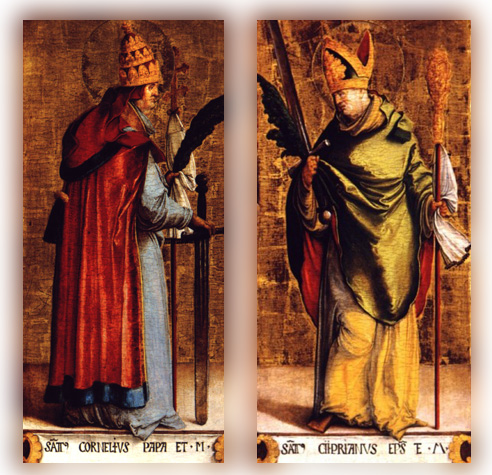 Cornelius was, by birth, of the highest nobility; witness his tomb, lately discovered in the family crypt, surrounded by the most honorable names in the patrician ranks. The elevation of a descendant of the Scipios to the sovereign Pontificate linked the past grandeurs of Rome to her future greatness. Decius, who “would more easily have suffered a competitor in his empire than a Bishop in Rome,” had just issued the edict for the seventh general persecution. But the Cæsar bestowed upon the world’s capital by a village of Pannonia, could not stay the destinies of the Eternal City. Beside this blood-thirsty emperor, and others like him whose fathers were known in the city only as slaves or conquered enemies, the true Roman, the descendant of the Cornelii, might be recognized by his native simplicity, by the calmness of his strength of soul, by the intrepid firmness belonging to his race and wherewith he first triumphed over the usurper, who was soon to surrender to the Goths on the borders of the Danube. And yet, O holy Pontiff, thou art even greater by the humility which Cyprian, thy illustrious friend, admired in thee, and by that purity of thy virginal soul, through which, according to him, thou didst become the elect of God and of his Christ.

Cyprian, ever ready, seemed in his incomparable calmness to defy the powers of earth and of hell. Never had a flock a surer hand to defend it under a sudden attack , and to put to flight the wild boar of the forest. And how proud the shepherd was of the dignity of that Christian family which God had entrusted to his guidance and protection! Love for the Church was, so to say, the distinguishing feature of the Bishop of Carthage. In his immortal letters to his most brave and most happy brethren, confessors of Christ, and the honor of the Church, he exclaims: “Oh! truly blessed is our mother the Church, whom the divine condescension has so honored, who is made illustrious in our days by the glorious blood of the triumphant martyrs; formerly white by the good works of our brethren, she is now adorned with purple from the veins of her heroes; among her flowers, neither roses nor lilies are wanting.”