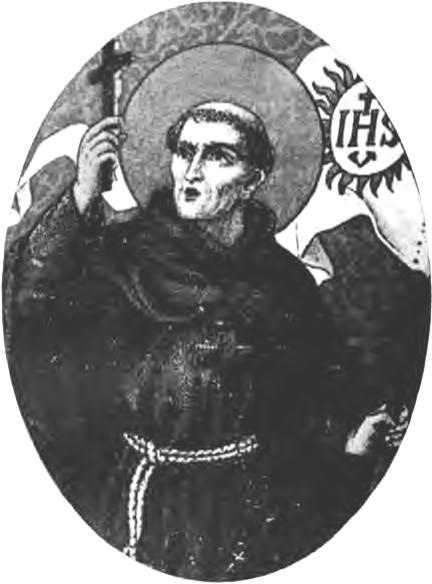 It was then that John Capistran, the saint of today, attained the consummation of his glory and sanctity. At the head of a few poor men of good will, unknown peasants gathered together by the Franciscan Friars, this “poor man of Christ” undertook to defeat the strongest and best organized army of the century. On the 14th of July, 1456, he broke through the Ottoman lines with John Hunyades, the only one of the Hungarian nobles who would accompany him, and revictualled Belgrade; and on the 22nd of July, feeling that he could no longer endure the defensive, he threw himself, to the stupefaction of Hunyades, on the enemy entrenchments. His troops were armed only with flails and pitchforks, and their only strategy was the name of Jesus. John had inherited this victorious battle-cry from his master, Bernardine of Siena. The Psalmist said: Some trust in chariots and some in horses: but we will call upon the name of the Lord our God. This name, so holy and so terrible, proved once more the salvation of the people. At the end of that memorable day twenty-four thousand Turks lay dead on the field of battle; three hundred cannon and all the spoils of the infidels were in the hands of the Christians, and Mahomet II was seeking a distant hiding place for his shame. The news of this victory, so like that of Gedeon, reached Rome on August 6, and Pope Callistus III decreed that henceforth the Universal Church should keep a solemn commemoration of the Transfiguration of Our Lord on that day, for it was with the soldiers of the Cross as with the heroes of Israel—“they got not the possession of the land by their own sword: neither did their own arm save them, but thy right hand and thy arm and the light of thy countenance because thou wast pleased with them,” as with Thy beloved Son on Mount Thabor.