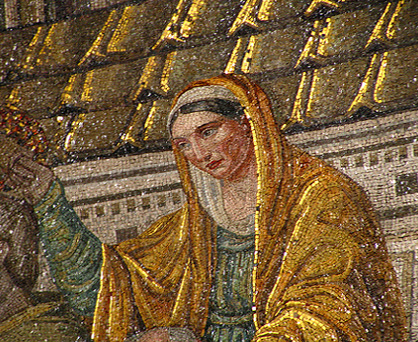 This same nineteenth of May has another glory attached to it;—it is the day on which died the noble virgin Pudentiana. That name carries us back to the very first Age of the Christian Church. She was a daughter of a wealthy Roman, called Pudens, who was a kinsman of the Pudens spoken of by St. Paul, in his second Epistle to Timothy. She and her sister Praxedes had the honor of being numbered among the earliest members of the Church, and both of them consecrated their virginity to Jesus Christ. Upon their father’s death, the two sisters distributed their fortune to the poor, and devoted their whole time to good works. It was the eve of the Persecution under Antoninus. Pudentiana, though scarcely sixteen years of age, was ripe for heaven, and winged her flight to her Divine Spouse, when the storm was at its height. Her sister survived her many years: we shall commemorate her saintly memory on the 21st of July.

Pudentiana’s house, which, in her grandfather’s time, had been honored by St. Peter’s presence, was made over, by the holy virgin herself, to Pope Pius the First, and the divine mysteries were celebrated in it. It is now one of the most venerable Churches of Rome, and is the Station for the Tuesday of the third week of Lent.

Pudentiana is a tender floweret offered to our Risen Jesus by the Roman Church. Time has diminished naught of the fair lily’s fragrance; and pure as her very name, her memory will live in the hearts of the Christian people, even to the end of the world.

The eulogy passed upon her by the holy Liturgy is but a commemoration; and yet it says so much, and will say it each year, as long as time itself shall last.

Like the dove of Noe’s Ark, that found not where to rest her feet on the guilty earth, thou tookest thy flight, O Pudentiana, and restedst in the bosom of Jesus, thy Spouse. Thus will it be at the end of the world, when the souls of the Elect shall have been reunited to their bodies: they will fly, like eagles to their King, and will cluster around him, as the object of all their desires. They will flee from this sinful earth, as thou didst from the abominations of Pagan Rome, that was drunk with the blood of the Martyrs. We celebrate thy departure, dear youthful Saint, with a feeling of hope for our own future deliverance; we honor thy reaching thy Jesus, and we long to be there, together with thee. Oh! get us detachment from all transitory things, intenser love of the New Life which came to us with Easter, and indifference as to what concerns that other lower life, which is not that of our Risen Lord. Thou wast a daughter of the holy Church of Rome; pray, then, for thy mother. She is suffering now, in the days of Pius the Ninth, as she did during the pontificate of Pius the First. After having reigned over Christian nations for centuries, she is now abandoned and disowned by the very people that owe all they have to her, and yet are now turning her own blessings against her. Use thine influence, O Pudentiana!—assist and protect thine and our dearest mother.