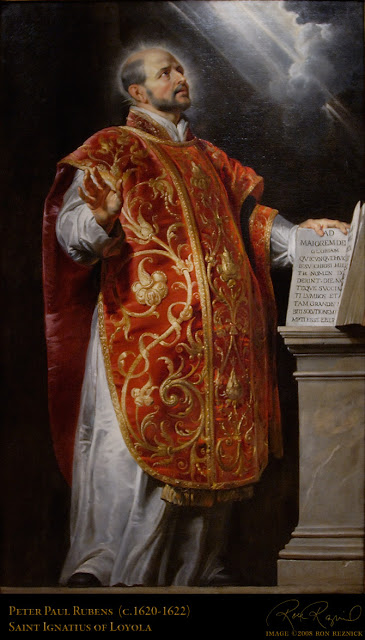 The development of Ignatius’ vocation to holiness, followed step by step the defection of Luther. In the Spring of 1521 Luther had just quit Worms and was defying the world from the Castle of Wartburg, when Ignatius received at Pampeluna the wound which was the occasion of his leaving the world and retiring at Manresa. Valiant as his noble ancestors, he felt within him from his earliest years the warlike ardor which they had shown on the battlefields of Spain. But the campaign against the Moors closed at the very time of his birth. Were his chivalrous instincts to be satisfied with petty political quarrels? The only true King worthy of his great soul revealed himself to him in the trial which put a stop to his worldly projects: a new warfare was opened out to his ambition; another crusade was gegun; and in the year 1522, from the mountains of Catalonia to those of Thuringia, was developed that divine strategy of which the Angels alone knew the secret.

The illustrious Cardinal Pie, in a homily delivered on the feast of the beatification of Bl. Pierre le Fèvre, said, “What strikes us at once in the history of the Society of Jesus, is that it was matured at its very first formation. Whosoever knows the first founders of the Company knows the whole Company, in its spirit, its aim, its enterprises, its proceedings, its methods. What a generation was that which gave it birth! What union of science and activity, of interior life and military life! One may say they were universal men, men of a giant race, compared with whom we are but insects: de genere giganteo, quibus comparati quasi locustæ videbamur.”