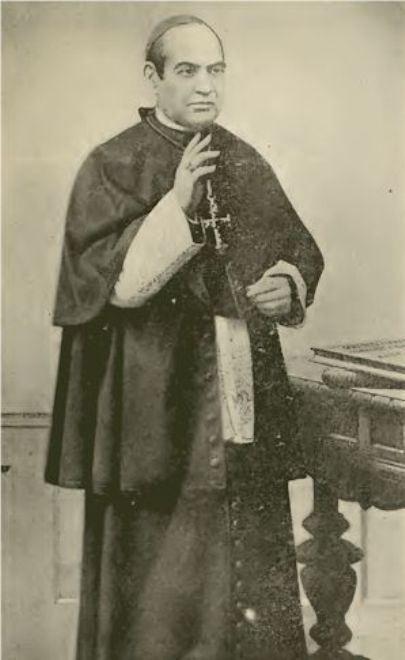 Saint Anthony Mary Claret is the Founder of the Claretian Fathers, or the Congregation of the Sons of the Immaculate Heart of Mary. Born in 1807 in Spain, he was a very pious child. He later wrote that, already at the age of five, “my little heart trembled at the thought of hell, and I said to myself: Will those who fall into hell never stop suffering? No, never. Will they always suffer? Yes, always. This thought remained profoundly engraved in my mind, and I can say that it is ever present to me. That is what has animated me to work for the conversion of sinners. Why? Because I received from God so tender a heart that I cannot see a misfortune without assisting it.” The young Anthony practiced his father’s trade, the weaving of fabrics, in which he excelled, until one day in church, “All the efforts I made not to voluntarily entertain thoughts of my trade were in vain; I was like a wheel turning with great speed, which cannot be stopped all at once … There were more machines running in my head than there are Saints on the altars.” He entered the local seminary in the same year, 1829.

As a young priest he went to Rome to place himself at the disposition of the Congregation of the Propaganda; there the director of a retreat counseled him to enter the Society of Jesus. He did so but was obliged to leave it soon afterwards because of poor health. He returned to Spain, and for nine years preached everywhere the word of God and promoted the Catholic Press. In 1848 he founded a publishing house at Barcelona, and soon afterwards established his Claretian congregation of priests. The six priests of this Congregation had just received the formal approbation of the bishop of Vich, and completed a retreat at the Seminary in July of 1848, with the Exercises of Saint Ignatius; on August 11th, while their new Superior was preaching a mission to the clergy of the diocese, he received a royal decree nominating him Archbishop of Santiago, in Cuba. He was inclined to refuse it categorically and attempted to do so, but was not heard; he asked his five companions to pray for light for several days, then to advise him as to their reply—should he or not accept the nomination? They were unanimous in saying they believed he should accept, and he did.

For six years he dedicated himself to the organization and evangelization of his diocese. In Cuba he founded another new congregation, the Sisters of Mary Immaculate, dedicated to the instruction of the young. A School of Arts and Trades was opened there, and Latin America saw established its first common funds resources. Abuses vanished under his strict and persevering disciplinary measures. In Cuba an attempt was made on his life; he received a severe wound of the head which limited his preaching capacity for a time, and he was recalled to Spain, summoned by Queen Isabella II to replace her deceased confessor. He continued to travel to various places on the peninsula, preaching everywhere in Andalusia and elsewhere. In 1862, from September 12th until October 29th, during one royal visitation, one of the Queen’s servants counted the sermons he had given—two hundred and five: sixteen to the clergy, nine to the seminarians; ninety-five to the various groups of Sisters; thirty-five to the poor in the various houses of charity; and twenty-two others to the people in general in the churches. He created the Academy of Saint Michael for the Catholic intellectuals, called to sustain the influence of the Church; he founded popular libraries and saw to the diffusion of good literature; he accompanied the exiled Queen to Rome and took part in the First Vatican Council, 1869. Finally he settled in France, where he died in 1870. He was canonized by Pope Pius XII in 1950.

He was commanded to write his life by his spiritual director; this he did, beginning in 1861. We are fortunate to possess this autobiography of an extraordinary soul, both contemplative and active in the love and service of God. It serves for the formation of missionaries, since his director told him it should be conceived with that purpose. In this book he wrote a paragraph which has become classic (Chapter XXXIV, paragraph 494), to describe what an apostle of the Gospel should be. In it the paths he followed himself are made articulate: “A son of the Immaculate Heart of Mary is a man who is consumed with love and who sets on fire everything in his path. He is a man who unceasingly expends himself to light the fire of divine love in the world. Nothing stops him; he places his joy in privations, he undertakes all works for the glory of God; he embraces willingly every sacrifice, he is happy in the midst of calumnies; he exults in torments. He can think of but one thing—working, suffering, and seeking at all times the greater glory of God and the salvation of souls, to imitate Our Lord Jesus Christ.”