Saint Albert the Great, Bishop, Confessor, and Doctor of the Church 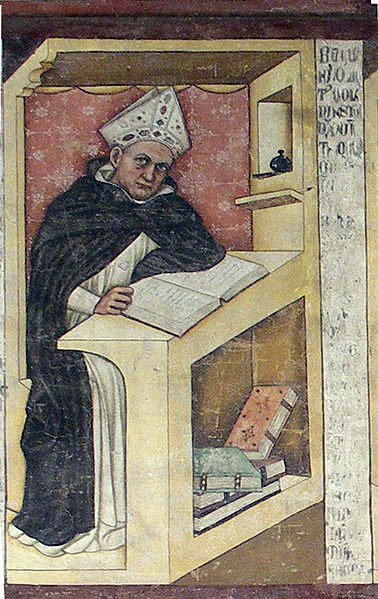 His contemporaries said of Albert that he was “a man no less than godlike in all knowledge, so that he may fitly be called the wonder and miracle of our age.” And it was they who dubbed him “the Great” and referred to him as the “universal doctor.” Little is known of his childhood and youth apart from the fact that he came from a wealthy and powerful military family; that he was born in 1206 at Lauingen, fief on the Danube near Augsburg held by his father; and that he was the eldest son in the family. Sometime prior to 1222 he went to study at the University of Padua, where he came into contact with the Dominican Order. In 1222, despite efforts made by an uncle who lived in padua to prevent it, he was received by the Domoinicans as a postulant. When he heard of it, his father threatened to use force to get him back, but this, too, came to nothing.

By 1228 Albert was teaching in Cologne, and in the course of the next twenty years he supervised studies and taught in Hildersheim, Freiburg-im-Breisgau, Regensburg, Strasbourg, Cologne again, and finally Paris, where he lectured under a master while studying for his own master’s degree. In 1248, the year he obtained his degree, the Dominicans opened four new houses of studies, and Albert was sent to be director of the one in Cologne. Among his students for the next four years was a younger member of the Dominican order, one Tommaso d’Aquino, better known to the English-speaking world as Thomas Aquinas, who was to build so successfully on his master’s pioneering achievement.

During this period the Order began to recognize Albert’s practical abilities, and in 1254 he was made prior provincial of the Friars Preachers in Germany. In 1256 he went to Paris in that capacity to attend a general chapter of the Order, which ruled, among other things, that Dominicans at the universities should not be called “master,” “doctor,” or anything but their own name. This ruling related personally to Albert. Because he himself had already been dubbed “universal doctor,” jealous secular professors were showing hostility toward the friars, and the granting of degrees to Thomas Aquinas and the Franciscan Bonaventure of Bagnoreggio had been delayed.

Albert went to Rome to defend the mendicant Orders against the criticisms that were being levelled against them, in particular by conservatives like William of St-Amour (c. 1200-72), whose tract on the subject was called On the Dangers of These Present Times. While he was in Rome, he filled the office of master of the sacred palace (the pope’s personal theologian and canonist, traditionally a Dominican friar) and preached in the churches of the city. In 1260 Pope Alexander IV appointed him bishop of Regensburg, a diocese said to be “turned upside-down in spiritual as well as temporal matters.” He worked hard to remedy its many ills, but a more ruthless personality and a different set of skills were needed to deal with the powerful vested interests and entrenched abuses that were plaguing it. After less than two years, to the great relief of the Dominican master general, Bd. Humbert of Romans, who had tried to persuade Alexander IV not to make Albert a bishop in the first place, the new pope, Urban IV, accepted Albert’s resignation, and he was able to return to the house of studies in Cologne.

Apart from one further interruption in the following year, when he went to help the Franciscan Berthold of Regensburg preach the Eight Crusade in Germany, Albert remained in Cologne teaching and writing until 1274, when he was asked to attend the Second Council of Lyons. Just as he was about to set out for Lyons, news reached him of the death of his disciple and friend, Thomas Aquinas, who was himself on his way to the council when he died. Despite the shock—Aquinas was not yet fifty years old—Albert went to the council and played an active part in its proceedings. In particular, he worked with Peter of Tarentaise (Pope Innocent V), and the bishop and classical scholar Guillaume de Moerbeke on the important matter of reunion with the Greeks.

Albert’s last public appearance probably took place in 1277, when he hurried to Paris to defend Thomas Aquinas’ writings, some of which had been seriously attacked by the bishop of Paris, Stephen Tempier, and a number of other theologians. He challenged the university to examine him personally on Thomas’ teachings—which was in some sense his own as well—but even so he was unable to prevent the condemnation of certain points. Then, in 1278, he was giving a lecture when his memory suddenly failed him. Over the next two years this loss of memory gradually became more or less complete—today he would be likely to be diagnosed as suffering from Alzheimer’s disease or some other form of dementia—and on the 15th of November 1280 he died suddenly and peacefully, sitting among his brethren in Cologne.

Not for nothing was Albert called “the universal doctor.” He had a prodigiously powerful mind and intellectual curiosity to match. Throughout his long years of teaching and administration he always found time to continue his research—in libraries, certainly, but also out in the fields or anywhere else that he could observe natural phenomena at first hand—and his writings, which incidentally contain the sort of biographical reference that is entirely missing from those of Thomas Aquinas, run to nearly forty volumes. At a time when philosophy was understood to include all the main branches of knowledge accessible to the natural powers of the human mind, Albert covered the field. He was particularly fascinated by “the causes that are at work in nature” and is frequently placed alongside Roger Bacon as one of the great natural scientists of his time. He was an authority on physics, astronomy, mineralogy, alchemy (chemistry), and biology. He wrote a treatise on botany and another on human and animal physiology in which he disposed, on the basis of personal observation, of a number of then current myths (for example, that eagles wrap their eggs in fox skin and leave them to hatch in the sun). As a geographer he explained, among other things, how latitude affects climate, and—two centuries before Columbus—that the earth is spherical. All of this was in addition to the work for which he is principally remembered. As a firm believer in the autonomy of reason and of the role of experience in the life of faith, he set out to show that far from being in conflict with Christian belief, the teachings of the ancient philosophers, notably Aristotle, can be reconciled with it and used as tools for our understanding of it. And in so doing he created the foundations on which Aquinas built the great edifice of Scholasticism.

In La Divina Commedia, Dante places Albert in the fourth sphere of heaven, that of the sun, among the spirts of scholars and wise men; he is seated immediately to the right of St. Thomas Aquinas, who introduces him to Dante as his “brother and master.” Albert is one of the few saints whose iconography was well developed even before his canonization. The many representations of him in art include an extraordinarily expressive portrait of Tomaso da Modena in the Dominican convent in Treviso and another, similarly expressive, by Justus of Ghent in the ducal palace in Urbino. He stands in the top left-hand corner of Dominican Beati in the National Gallery in London—one of three portrayals of him by Fra Angelico.

Albert was beatified by Pope Gregory XV in 1622, but despite a considerable increase in devotion to him then, especially in Germany, and an appeal from the German bishops in 1927, he was effectively canonized only in 1931, when Pope Pius XI proclaimed him a Doctor of the Church. Albert, the pope said, “is precisely the saint whose example should inspire the present age, which seeks peace so ardently and is so full of hope in its scientific discoveries.” He named him patron of students of the natural sciences.

Let us read the Church’s account of his life: