The Commencement of the Great Antiphons 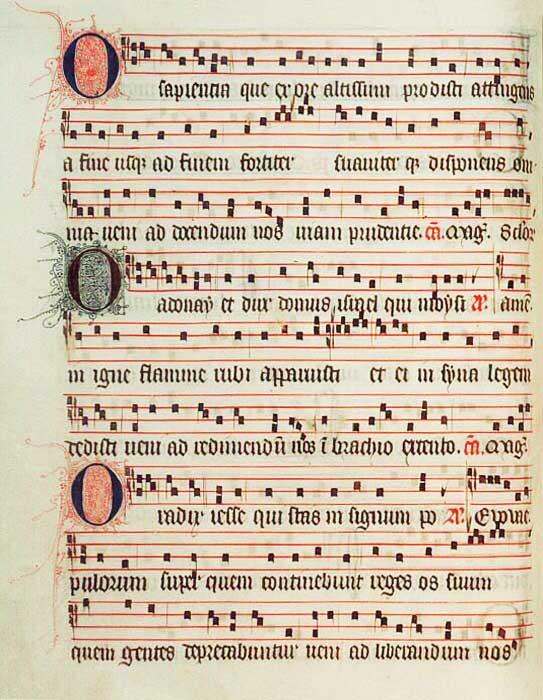 The Church enters today on the seven days which precede the Vigil of Christmas, and which are known in the Liturgy under the name of the Greater Ferias. The ordinary of the Advent Office becomes more solemn; the Antiphons of the Psalms both for Lauds and the Hours of the day are proper, and allude expressly to the great Coming. Every day at Vespers is sung a solemn Antiphon, which consists of a fervent prayer to the Messias, whom it addresses by one of the titles given him by the sacred Scriptures.

In the Roman Church, there are seven of these Antiphons, one for each of the Greater Ferias. They are commonly called the O’s of Advent because they all begin with that interjection. In other Churches, during the Middle Ages, two more were added to those seven: one to our Blessed Lady, O Virgo Virginum;, and the other to the Angel Gabriel, O Gabriel, or to St. Thomas the Apostle, whose feast comes during the Greater Ferias; it began O Thoma Didyme. There were even Churches where twelve Great Antiphons were sung; that is, besides the nine we have just mentioned, there was O Rex Pacifice to our Lord, O Mundi Domina to our Lady, and O Hierusalem to the city of the people of God.

The canonical Hour of Vespers has been selected as the most appropriate time for this solemn supplication to our Savior because, as the Church sings in one of her hymns, it was in the Evening of the world (vergente mundi vespere) that the Messias came amongst us. These Antiphons are sung at the Magnificat to show us that the Savior, whom we expect, is to come to us by Mary. They are sung twice; once before and once after the Canticle, as on Double Feasts, and this to show their great solemnity. In some Churches it was formerly the practice to sing them thrice; that is, before the Canticle, before the Gloria Patri, and after the Sicut erat. Lastly, these admirable Antiphons, which contain the whole pith of the Advent Liturgy, are accompanied by a chant replete with melodious gravity, and by ceremonies of great expressiveness, though in these latter, there is no uniform practice followed. Let us enter into the spirit of the Church; let us reflect on the great Day which is coming; that thus we may take our share in these the last and most earnest solicitations of the Church imploring her Spouse to come, and to which He at length yields.

O Uncreated Wisdom! that art so soon to make thyself visible to thy creatures, truly thou disposest all things. It is by thy permission that the Emperor Augustus issues a decree ordering the enrollment of the whole world. Every citizen of the vast Empire is to have his name enrolled in the city of his birth. This prince has no other object in this order, which sets the world in motion, but his own ambition. Men go to and fro by millions, and an unbroken procession traverses the immense Roman world; men think they are doing the bidding of man, and it is God whom they are obeying. This world-wide agitation has really but one object; it is to bring to Bethlehem a man and woman who live at Nazareth in Galilee, in order that this woman, who is unknown to the world but dear to heaven, and it at the close of the ninth month since she conceived her child, may give birth to this Child in Bethlehem, for the Prophet has said of him: “His going forth is from the beginning, from the days of eternity. And thou, O Bethlehem! art not the least among the thousand cities of Juda, for out of thee He shall come.” O divine Wisdom! how strong art thou, in thus reaching thine ends by means which are infallible, though hidden! and yet, how sweet, offering no constraint to man’s free will! and withal, how fatherly, in providing for our necessities! Thou choosest Bethlehem for thy birth place, because Bethlehem signifies the House of Bread. In this, thou teachest us that thou art our Bread, the nourishment and support of our life. With God as our food, we cannot die. O Wisdom of the Father, Living Bread that hast descended from heaven, come speedily into us, that thus we may approach to thee and be enlightened by thy light, and by that prudence which leads to salvation.