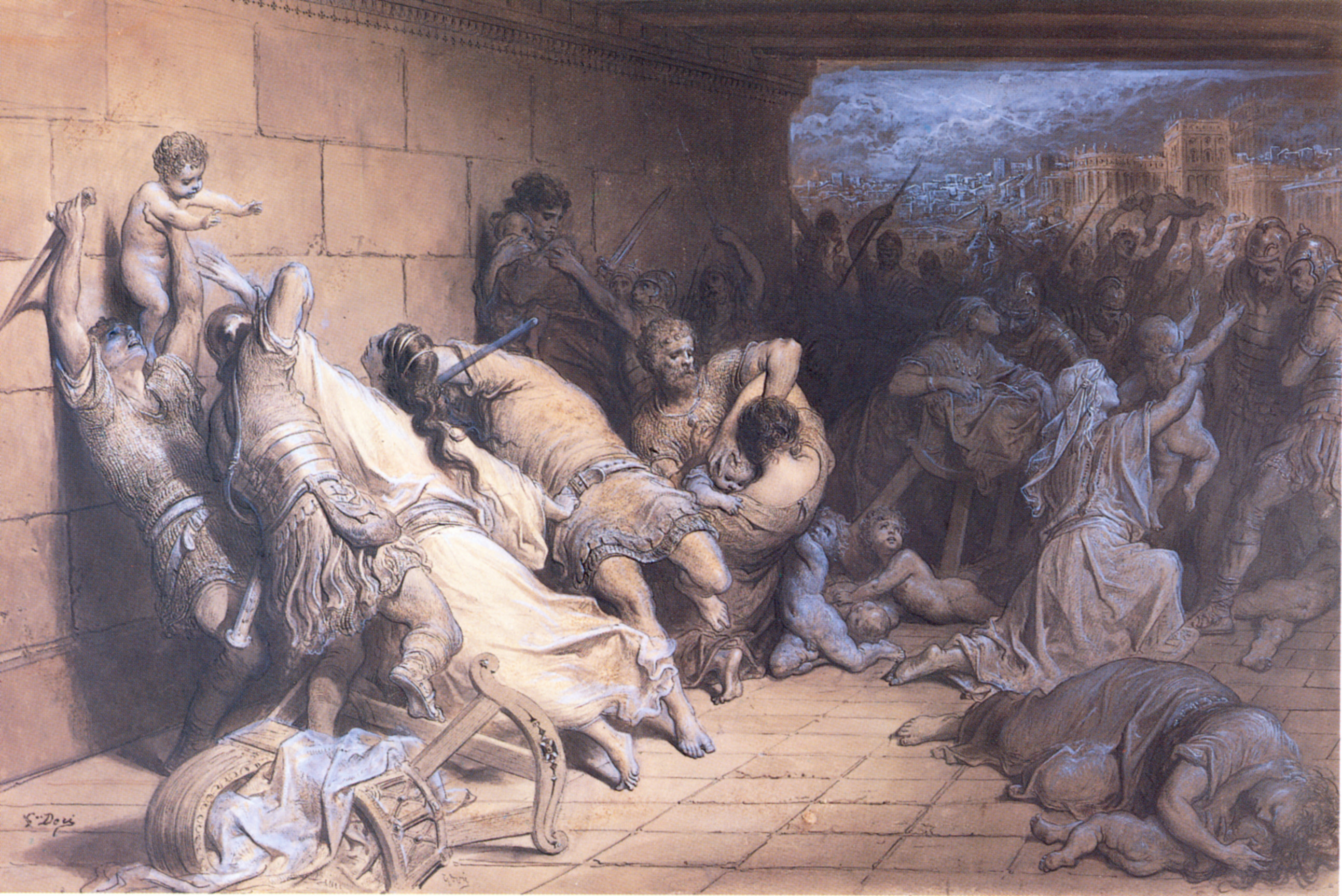 The feast of the beloved Disciple is followed by that of the Holy Innocents. The Crib of Jesus—where we have already met and venerated the Prince of Martyrs and the Eagle of Patmos—has today standing round it a lovely choir of little Children, clad in snow-white robes, and holding green branches in their hands. The Divine Babe smiles upon them—he is their King; and these Innocents are smiling upon the Church of God. Courage and Fidelity first led us to the Crib; Innocence now comes, and bids us tarry there.

Herod intended to include the Son of God amongst the murdered Babes of Bethlehem. The Daughters of Rachel wept over their little ones, and the land streamed with blood; but the Tyrant’s policy can do no more: it cannot reach Jesus, and its whole plot ends in recruiting an immense army of Martyrs for heaven. These Children were not capable of knowing what an honor it was for them to be made victims for the sake of the Savior of the world, but the very first instant after their immolation, and all was revealed to them: they had gone through this world without knowing it, and now that they know it, they possess an infinitely better. God showed here the riches of his mercy—he asks of them but a momentary suffering, and that over, they wake up in Abraham’s Bosom: no further trial awaits them, they are in spotless innocence, and the glory due to a soldier who died to save the life of his Prince belongs eternally to them.

They died for Jesus’ sake—therefore their death was a real Martyrdom, and the Church calls them by the beautiful name of The Flowers of the Martyrs, because of their tender age and their innocence. Justly, then, does the ecclesiastical Cycle bring them before us today, immediately after the two valiant Champions of Christ, Stephen and John. The connection of these three Feasts is thus admirably explained by St. Bernard, in his Sermon for the Holy Innocents: “In St. Stephen, we have both the act and the desire of Martyrdom; in St. John, we have but the desire; in the Holy Innocents, we have but the act … Will anyone doubt whether a crown was given to these innocents? … If you ask me what merit could they have, that God should crown them? let me ask you, what was the fault for which Herod slew them? What! is the mercy of Jesus less than the cruelty of Herod? and while Herod could put these Babes to death, who had done him no injury, Jesus may not crown them for dying for Him?

“Stephen, therefore, is a Martyr, by a Martyrdom of which men can judge, for he gave this evident proof of his sufferings being felt and accepted, that at the very moment of his death, his solicitude both for his own soul and for those of his persecutors increased; the pangs of his bodily passion were less intense than the affection of his soul’s compassion, which made him weep more for their sins than for his own wounds. John was a Martyr, by a Martyrdom which only Angels could see, for the proofs of his sacrifice being spiritual, only spiritual creatures could ken them. But the Innocents were Martyrs to none other eye save thine, O God! Man could find no merit; Angel could find no merit: the extraordinary prerogative of thy grace is the more boldly brought out. From the mouth of the Infants and the Sucklings thou hast perfected praise. The praise the Angels give thee is: Glory be to God in the highest, and peace on earth to men of good will: it is a magnificent praise, but I make bold to say that it is not perfect till He cometh who will say: ‘Suffer Little Children to come unto me, for of such is the kingdom of heaven; and in the mystery of my mercy, there shall be peace to men that cannot even use their will.'”

Yes, God did for these Innocents, who were immolated on his Son’s account, what he is doing every moment now by the sacrament fo regeneration, in the case of children who die before coming to the use of reason. We, who have been baptized by water, should be all the more ready to honor these Little Ones, who were baptized in their own blood, and thereby associated to all the mysteries of the Divine Infancy. We ought, together with the Church, to congratulate them, for that a glorious and premature death secured them their innocence. They have lived upon our earth, and yet it defiled them not! Truly, these tender Lambs deserve to be forever with the Lamb of God! May this same earth of ours, grown old in wickedness, draw down the divine mercy on itself, by the love and honor it gives, each year, to these sweet Children of Bethlehem, who, like the Dove of Noah’s Ark, could not find whereon to rest their feet.

In the midst of the joy, which at this holy time fills both heaven and earth, the Holy Church of Rome forgets not the lamentations of the Mothers, who beheld their Children cruelly butchered by Herod’s soldiers. She hears the wailing of Rachel, and condoles with her; and unless it be a Sunday, she suspends on this Feast some of the manifestations of the joy which inundates her soul during the Octave of Jesus’ Birth. The Red Vestments of a Martyr’s Day would be too expressive of that stream of infant blood which forbids the Mothers to be comforted, and joyous White would ill suit their poignant grief; she therefore vests in Purple, the symbol of mournfulness. The Gloria in excelsis, the Hymn she loves so passionately during these days when Angels come down from heaven to sing it—even that must be hushed today: and in the Holy Sacrifice, she sings no Alleluia. In this, as in everything she does, the Church acts with an exquisite delicacy of feeling. Her Liturgy is a school of refined christian considerateness.

This expression of sympathy gives today’s Office a pathetic sadness, which, however, in no ways interferes with the joy which the Church feels in celebrating the Feast of the Holy Innocents. She keeps it with an Octave, as she does in the two preceding Feasts of St. Stephen and St. John. She sanctions the practice, observed in Cathedral and Collegiate Churches, of allowing young boys to share in the duties of the Choir, and blend their innocent chanting with that of the Ministers of God. She grants them several privileges, and takes pleasure in seeing the delight wherewith these children perform the several functions entrusted to them. This joy, this simplicity, this innocence, all add a charm to the divine Service; and through these youthful Choristers, the Church pays honor to the Infant Jesus, and to the Holy Innocents of Bethlehem.

In Rome, the Station for the Feast of St. Stephen is in the Church dedicated to the holy Protomartyr, on Monte Celio; that for St. John is in the Basilica of St. Mary Major; today, the Station is made at St. Paul’s beyond the Walls, which possesses several of the bodies of the Holy Innocents. In the 16th century, Pope Xystus the Fifth caused a portion of these Relics to be translated to St. Mary Major’s, and put near the holy Relic of our Lord’s Crib.

Mass.—In the Introit, the Church proclaims the wisdom of God in disconcerting the impious plans of Herod, and turning the murder of the Innocents into his own glory, by raising them to the dignity of Martyrs of Christ, whose praises they gratefully sing forever.

In the Collect, the Church prays that her children may confess, by their works, their faith in Christ. The Holy Innocents give their testimony—the only one in their power—of suffering for their divine Master: but the Christian, who has attained the use uf reason has more to do than suffer for his faith—he must confess it before Persecutors and Tyrants when they bid him deny it, and also before that more permanent tribunal of the world and his own passions. No man has received the glorious character of a Christian, on the condition that he should never own himself one.

The Church shows us, by her choice of the mysterious passage of the Apocalypse we read as the Lesson how great a value she sets on Innocence, and what our own esteem of it ought to be. The Holy Innocents follow the Lamb because they are pure. Personal merits on earth they could not have; but they went rapidly through this world, and its defilements never reached them. Their Purity was not tried, as was St. John’s; but it is beautified by the blood they shed for the Divine Lamb, and He is pleased with it, and makes them his companions. Let the Christian, therefore, be ambitious for this Innocence, which is thus singularly honored. If he have preserved it, let him keep and guard it as his most precious treasure; if he have lost it, let him repair the loss by repentance, and having done so, let him say with the Spouse in the Canticle: I have washed my feet; how shall I defile them?

In the Gradual, we have the Innocents blessing their God for having broken the snare wherewith the world would have made them captive. They have fled as a bird set free; there was nothing to clog their flight.

The Tract expresses the lamentation of Rachel over the cruelty of Herod and his minions. It invokes the divine vengeance, which swept away the whole family of this vile Tyrant.

If the Feast of Holy Innocents fall on a Sunday, the Tract is not sung, but, in its place, the usual Alleluia verse, as follows:

Thus does the Gospel, in its sublime simplicity, relate the Martyrdom of the Innocents. Herod, sending, killed all the Children! The earth paid no attention to the fell tyranny, which made so rich a harvest for heaven: there was heard a voice in Rama, Rachel wailing her little ones—it went up to heaven, and Bethlehem was still again, as though nothing had happened. But these favored Victims had been accepted by God, and they were to be the companions of his Son. Jesus looked at them from his crib and blessed them; Mary compassionated with them and their mothers; the Church, which Jesus had come to form would, for all future ages, glorify these youthful Martyrs, and place the greatest confidence in the patronage of these Children, for she knows how powerful their intercession is with her heavenly Spouse.

During the Offertory, it is the choir of our Holy Innocents again singing their beautiful Canticle: as birds set free, they give praise to Him who broke the snare which held them.

In the Communion-Anthem, we again hear the voice of Rachel’s lamentation. Now that the Church has been nourished by the mystery of divine charity, she could not forget the affliction of the mothers of her dear Innocents. She compassionates them all through her Office, and turns to Him who alone can comfort them that are in sorrow.