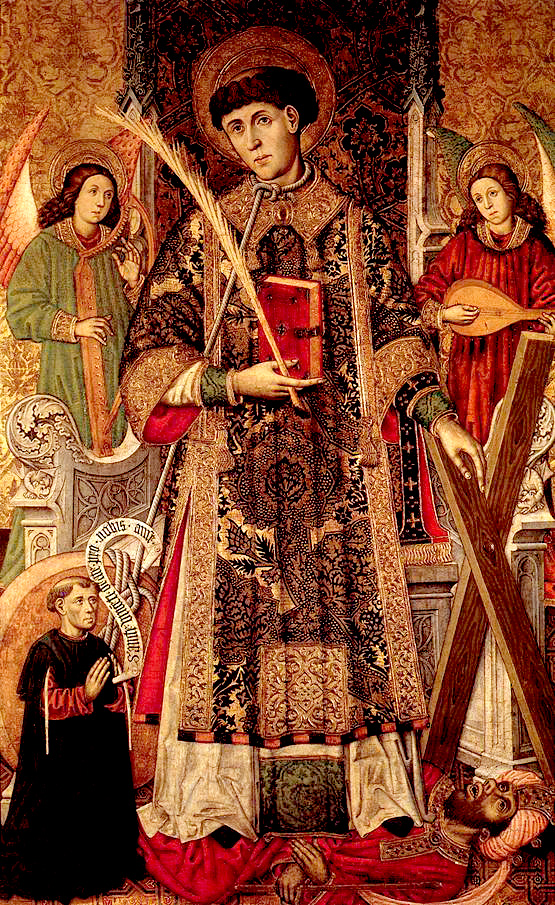 Vincent, the Victorious, vested in the sacred dalmatic and holding his palm in his hand, comes today to his Jesus’ crib and right welcome is he to Stephen, the Crowned, his leader and his brother Spain is his country. He is a Deacon of the glorious Church of Saragossa and, by the strength and warmth of his faith, he is a type of that land, which by excellence the Catholic Kingdom. But he does not belong to Spain only: like Stephen and like Laurence, Vincent is the favorite and hero of the whole Church. Stephen the Deacon preached the divinity of Jesus amidst the shower of stones which were hurled upon him as a blasphemer; Vincent the Deacon confessed his faith in Jesus upon his red-hot gridiron, as did that other Deacon, Laurence. This triumvirate of Martyr-Deacons cluster together in the sacred Litany, and when we hear their three grand names, the Crown, the Laurel, and the Conqueror, we hail them as the three bravest Knights of our most dear Lord.

Vincent triumphed over the torture of fire, because the flame of divine love which burned within his soul was keener than that which scorched his body. He was comforted in the most miraculous manner during his great sufferings; but God worked these prodigies not to deprive Vincent of his crown, but to show his own power. The holy Deacon had but one thought in the midst of all his pains—he was ambitious to make return, by the gift of his own life, for that sacrifice whereby his divine Master had died for him and for all men. And now, that so generous a lover of God should be at the Crib of this same Jesus—is it not right and just? Oh! how he urges us, every Christmas, to love this Divine Infant! He that hesitated not, when called on to give himself to his Lord, even though it was to cost him such cruel pains—what cowards would he not call us, who can come so many Christmases to Bethlehem, and have nothing to give but cold and divided hearts! His sacrifice was to be burned alive, and torn, and cut, and he smiled as he gave it: what are we to say of ourselves, who take years to think before we will give up those childish things which prevent us from ever seriously beginning a new life with our newborn Jesus! Would that the sight of all these Martyrs, in whose company the Church has made us live during these last few days, would touch our hearts and make them resolute and simple!

There is an ancient Christian tradition which makes St. Vincent the patron of vineyards and laborers in vineyards. This was, no doubt, suggested by the Saint’s having held the office of Deacon; for the Deacon has to pour wine into the chalice during the holy Sacrifice of the Mass, and that wine is to be changed into the Blood of Christ. A few days ago, we assisted at the mystery of the Feast at Cana: Jesus then offered us the sacred cup, the wine of his love: today, again, he offers it to us by the hand of his Martyr Vincent. To make himself worthy of his high office, the holy Deacon mingled his own blood, as a generous wine, in the cup that holds the price of the world’s salvation. It is thus that we are to understand that expression of St. Paul which says that the Saints fill up, in the flesh, by the merit of their sufferings, those things that are wanting, not in their efficacy, but in their fulness, of the sufferings of Christ, whose members the Saints are.

We will now give the abridged account of the martyrdom of St. Vincent, as it is related in the Lessons of his Feast.

The Gothic Church of Spain, in her Mozarabic Liturgy, is magnificent in her praises of St. Vincent. The first and second of the following Prayers are taken from the Breviary, the third is from the Missal, of that Rite.

We regret being obliged to content ourselves with a few stanzas of the magnificent Hymn composed by Prudentius in honor of St. Vincent. The Ambrosian Breviary has selected several verses of this long Poem, for one of its Hymns; and these we offer to our readers.

Adam of Saint-Victor composed two Sequences in honor of the great Deacon of Saragossa. We consider it a duty to insert them both, for they are very beautiful.

Hail, Victorious Deacon! How beautiful art thou, with the Chalice of salvation in thy brave hands! It was thine office to offer it at the Altar, in order that the wine it contained might be changed by the sacred words into the Blood of Christ; and when the Mystery was accomplished, thou hadst to take this same Chalice, and present it to the Faithful, to the end that they who thirsted after their God might drink at the source of eternal life. But on this day, thou offerest it thyself to Jesus, and it is full to the brim with thine own blood. Oh! how faithful a Deacon! giving even thy very life in testimony to the Mysteries of which thou wast the dispenser. Three centuries had elapsed since Stephen’s sacrifice; sixty years had gone by since the sweet incense of Laurence’s martyrdom had ascended to the throne of God; and now, it is the last persecution—peace is dawning on the Church—and a third Deacon comes to prove that time had not impaired the Order—it was the Deacon of Saragossa—thyself, dear Saint!

Bright is thy name in the list of Martyrs, O Vincent! and the Church is proud of thy triumph. It was for the Church, after Jesus, that thou didst combat: have pity on us, therefore, and signalize this day of thy Feast by showing us the effects of thy protection. Thou art face to face with the King of Ages, whose battle thou didst fight on earth, and thou gazest, with a loving yet dazzled eye, on his eternal beauty. We, also, we, who are in this valley of tears, possess him, and see him, for he calls himself our Emmanuel, God with us. But it is under the form of a weak Babe that he shows himself to us, for he fears to overpower us with the splendor of his majesty. Pray for us, O holy Martyr Vincent! for, at times, we tremble at the thought that this sweet Jesus is, one day, to be our Judge. When we reflect on what thou didst and sufferedst for him, we have scarcely courage to think upon ourselves, for what good works can we show? or who can say of us that we were ever warm in defending the cause of our Divine Master? Oh! that thy Feast might shame us into the earnest uncalculating simplicity which this sweet Babe of Bethlehem is come to teach us—the simplicity which springs from humility and confidence in God, and which made thee go through all thy martyrdom with a brave, but oh! with such a calm spirit! Pray for us, that we may at length obey the God who teaches us by his own example and, with hearts ambitious for nought but the pleasing Him, accomplish his will, whatever they may ask of us; and all this with the calm cheerfulness of devoted service.

Pray Vincent, for all Christians, for all are called to fight against the world and their own passions. We are all invited to a palm, a crown, a Victory. Jesus will admit none but conquerors to the banquet of eternal glory, where he has promised to drink with us the new wine, in the Kingdom of his Father. The wedding garment, which all must have on who enter there, must be washed in the Blood of the Lamb—we must all be Martyrs, at least in heart, for we have all to triumph over self, and that is the harshest of tyrants.

Fly to the assistance of the Martyrs who, in distant countries, are dying for the true Faith; obtain for them such courage that they may be the Vincents of our age. Protect Spain, thy country. Beseech our Emmanuel to send her heroes of thy stamp; that so, the Catholic Kingdom, which has ever been so jealous of purity of faith, may speedily triumph over the trials which are at present heavy upon her. Shall the illustrious Church of Saragossa—founded by St. James the Apostle, visited by the Blessed Mother of God and sanctified by the ministry of thy deaconship—shall such a country as this ever grow indifferent about Faith or suffer the bond of unity to be broken!—And since the devotion of the Christian people looks upon thee as the protector of the Vine, bless this portion of creation which God has destined for man’s use, and which he has deigned to make both the instrument of the deepest of his Mysteries, and the symbol of his love of mankind. 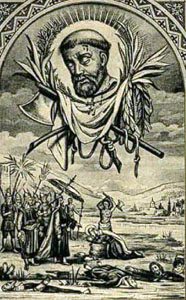 On this same 22nd of January, the Church honors the memory of the holy Persian Monk Anastasius, who suffered Martyrdom in the year 628. Chosroes, having made himself master of Jerusalem, had carried with him into Persia the Wood of the True Cross, which was afterwards recovered by Heraclius. The sight of this Holy Wood excited in the heart of Anastasius, who was then a Pagan, the desire of knowing the Religion of which it is the trophy. He renounced the Persian superstitions in order to become a Christian and a Monk. This, together with the neophyte’s zeal, excited the Pagans against him; and after enduring frightful tortures, the Soldier of Christ was beheaded. His body was taken to Constantinople, and thence to Rome, where it is still honored. Two celebrated Churches of Rome, one in the City itself, and the other outside the walls, are dedicated in common to St. Vincent and St. Anastasius, because these two great Martyrs suffered on the same day of the year, though in different centuries. This is the motive of the Church’s uniting their two Feasts into one. Let us pray to this new champion of the Faith, that he intercede for us to the Savior, whose Cross was so dear to him.

We add the short lesson upon St. Anastasius, which occurs immediately after those of St. Vincent.

Let us now address ourselves to both these holy Martyrs, using the prayer of their Feast.