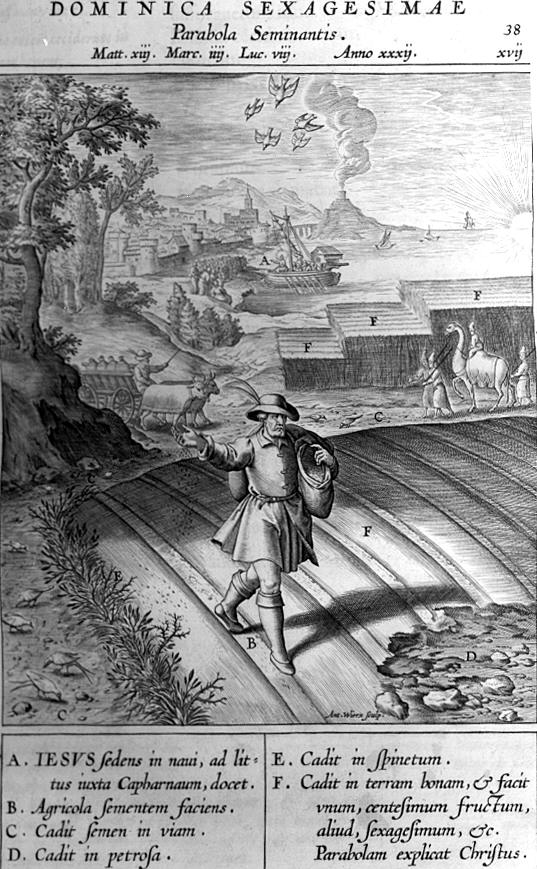 The Church offers to our consideration, during this week of Sexagesima, the history of Noah and the deluge. Man has not profited by the warnings already given him. God is obliged to punish him once more, and by a terrible chastisement. There is found out of the whole human race one just man; God makes a covenant with him, and with us through him. But before He draws up this new alliance, He would show that He is the sovereign Master, and that man, and the earth whereon he lives, subsist solely by His power and permission.

As the ground-work of this week’s instructions, we give a short passage from the Book of Genesis: it is read in the Office of this Sunday’s Matins.

This awful chastisement of the human race by the deluge was a fresh consequence of sin. This time, however, there was found one just man; and it was through him and his family that the world was restored. Having once more mercifully renewed His covenant with His creatures, God allows the earth to be repeopled, and makes the three sons of Noah become the fathers of the three great families of the human race.

This is the mystery of the Divine Office during the week of Sexagesima. The mystery expressed in today’s Mass is of still greater importance, and the former of but a figure of it. The earth is deluged by sin and heresy. But the word of God, the seed of life, is ever producing a new generation: a race of men who, like Noah, fear God. It is the word of God that produces those happy children of whom the beloved disciple speaks, saying, “They are born not of blood, nor of the will of the flesh, nor of the will of man, but of God.” Let us endeavor to be of this family; or, if we are already numbered among its members, let us zealously maintain our glorious position: What we have to do during these days of Septuagesima, is to escape from the deluge of worldliness and take shelter in the Ark of salvation; we have to become that good soil which yields a hundred-fold from the heavenly seed. Let us flee from the wrath to come, lest we perish with the enemies of God: let us hunger after that word of God which converteth and giveth life to souls.

With the Greeks, this is the seventh day of their week Apocreos, which begins on the Monday after our Septuagesima Sunday. They call this week Apocreos because they then begin to abstain from flesh meat, which abstinence is observed till Easter Sunday.

Mass.—At Rome the Station is in the basilica of St. Paul outside the walls. It is around the tomb of the Doctor of the Gentiles, the zealous sower of the divine seed, the father by his preaching of so many nations, that the Roman Church assembles her children on this Sunday, whereon she is about to announce to them how God spared the earth on the condition that it should be peopled with true believers and with faithful adorers of His name.

The Introit, which is taken from the Psalms, cries out to our Lord for help. The human race, all but extinct after the deluge is here represented as beseeching its Creator to bless and increase it. The Church adopts the same prayer, and asks her Savior to multiply the children of the Word, as He did in former days.

In the Collect, the Church expresses the confidence she puts in the prayers of the great apostle St. Paul, that zealous sower of the divine seed, who labored more than the other apostles in preaching the word to the Gentiles.

Then are added two other Collects, as in the Mass of Septuagesima Sunday.

The Epistle is that admirable passage from one of St. Paul’s Epistles, in which the great apostle, for the honor and interest of his sacred ministry, is necessitated to write his defense against the calumnies of his enemies. We learn from this his apology what labors the apostles had to go through in order to sow the word of God in the barren soil of the Gentile world and make it Christian.

In the Gradual, the Church beseeches her Lord to give her strength against those who oppose the mission He has entrusted to her, of gaining for Him a new people, adorers of His sovereign Majesty.

While the earth is being moved and is suffering those terrible revolutions which, deluge-like, come first on one nation and then on another, the Church prays for her faithful children, in order that they may be spared, for they are the elect, and the hope of the world. It is thus she prays in the Tract, which precedes the Gospel of the word.

St. Gregory the Great justly remarks that the Gospel’s parable needs no explanation, since eternal Wisdom Himself has told us its meaning. All that we have to do is to profit by this divine teaching and become the good soil, wherein the heavenly seed may yield a rich harvest. How often have we hitherto allowed it to be trampled on by them that passed by, or to be torn up by the birds of the air! How often has it found our heart like a stone that could give no moisture, or like a thorn plot that could but choke! We listened to the word of God; we took pleasure in hearing it; and from this we argued well for ourselves. Nay, we have often received this word with joy and eagerness. Sometimes, even, it took root within us. But alas! something always came to stop its growth. Henceforth, it must both grow and yield fruit. The seed given to us is of such quality that the divine Sower has a right to expect a hundred-fold. If the soil, that is, our heart, be good; if we take the trouble to prepare it by profiting of the means afforded us by the Church, we shall have an abundant harvest to show our Lord on that grand day when, rising triumphant from His tomb, He will come to share with His faithful people the glory of His Resurrection.

Inspirited by this hope, and full of confidence in Him who has once more thrown this seed into this long ungrateful soil, let us sing with the Church, in her Offertory, these beautiful words of the royal psalmist: they are a prayer for holy resolution and perseverance.

To this are added the other Secrets, as on Septuagesima Sunday.

The visit, which our Lord makes to us in the Sacrament of His love, is the grand means whereby He gives fertility to our souls. Hence it is that the Church invites us, in the Communion antiphon, to draw nigh to the altar of our God; there, our heart shall regain all the youthful fervor of its best days.

Two other Postcommunions are said after this, as on Septuagesima Sunday.

We will end our Sunday by a hymn taken from the ancient breviaries of the Churches of France: it will help us to keep up in our souls the sentiments proper to the season of Septuagesima.