Feast of the Most Holy Name of Mary 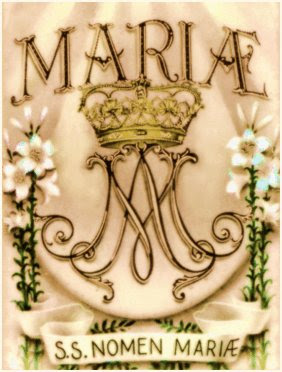 “And the Virgin’s name was Mary. Let us speak a little about this name, which signifies Star of the sea, and which so well befits the Virgin Mother. Rightly is she likened to a star: for as a star emits its ray without being spoilt, so the Virgin brought forth her Son without receiving any injury; the ray takes nought from the brightness of the star, nor the Son from his Mother’s integrity. This is the noble star risen out of Jacob, whose ray illumines the whole world, whose splendor shines in the heavens, penetrates the abyss, and traversing the whole earth, gives warmth rather to souls than to bodies, cherishing virtues, withering vices. Mary, I say, is that bright and incomparable star, whom we need to see raised above this vast sea, and shining by her merits, giving us light by her example.

“O whosoever thou art, that seest thyself, amid the tides of this world, tossed about by storms and tempests rather than walking on the land, turn not thine eyes away from the shining of this star if thou wouldst not be overwhelmed by the hurricane. If squalls of temptations arise, or thou fall upon the rocks of tribulation, look to the star, call upon Mary. If thou art tossed by the waves of pride or ambition, detraction or envy, look to the star, call upon Mary. If anger or avarice or the desires of the flesh dash against the ship of thy soul, turn thine eyes towards Mary. If, troubled by the enormity of thy crimes, ashamed of thy guilty conscience, terrified by dread of the judgment, thou beginnest to sink into the gulf of sadness, or the abyss of despair, think of Mary. In dangers, in anguish, in doubt, think of Mary, call upon Mary. Let her be ever on thy lips, ever in thy heart; and the better to obtain the help of her prayers, imitate the example of her life. Following her, thou strayest not; invoking her, thou despairest not; thinking of her, thou wanderest not; upheld by her, thou fallest not; shielded by her thou fearest not; guided by her, thou growest not weary; favored by her, thou reachest the goal. And thus dost thou experience in thyself how good is that saying: And the Virgin’s name was Mary.”

Thus speaks the devout St. Bernard, in the name of the Church. But his pious explanation does not exhaust the meanings of this blessed name of Mary. St. Peter Chrysologus adds in this same Night Office: “Mary in Hebrew signifies Lady or Sovereign; and truly the authority of her Son, who is the Lord of the world, constituted her Queen, both in fact and in name from her very birth.”

Our Lady: such is the title which befits her in every way, as that of Our Lord beseems her Son; it is the doctrinal basis of that worship of hyperdulia which belongs to her alone. She is below her Son, whom she adores as we do; but above all God’s servants, both Angels and men, inasmuch as she is his Mother. At the Name of Jesus every knee is bent; at the Name of Mary every head is bowed. And although the former is the only Name whereby we may be saved; yet, as the Son can never be separated from his Mother, heaven unites their two Names in its hymns and praise, earth in its confidence, hell in its fear and hatred.

It was therefore in the order of Divine Providence that devotion to the most holy Name of Mary should spread simultaneously with the cultus of the adorable Name of Jesus, of which St. Bernadin of Siena was the apostle in the 15th century. In 1513 the Church of Cuenca in Spain was the first to celebrate, with the approbation of the Holy See, a special feast in honor of the Name of Mary; while the Franciscan Order had not yet succeeded in obtaining a like privilege for the adorable Name of Jesus. The reason of this is that the memory of that sacred Name included in the Feast of the Circumcision, seemed to the prudence of the Pontiffs to suffice. From the same motive we find the Feast of the most holy Name of Mary extended to the universal Church in the year 1683, and that of the most holy Name of Jesus not until 1721.

Our Lady justifies her beautiful title by partaking in the warlike exploits of the King of kings her Son. The city of Vienna having been delivered by her from the power of the Crescent, contrary to all hope, the venerable Innocent XI made this feast the memorial of universal gratitude to the liberatrix of the West. But we shall speak more explicitly of this glorious deliverance on the 12th of September, the day on which it occurred.

Mass.—In the Introit let us with the Church greet the sweet Infant whose name foretells her power; all the rich and the great ones, kings, pontiffs, seraphim, shall entreat her smile; but the virgins are to form her own blessed train, singing the canticle they alone can sing.

The name of Mary, which is the joy of angels and the terror of demons, protects man against countless evils, and supports him on his way to heaven. May the Church’s prayer, in the Collect, obtain for us the grace to profit fully of so great a help.

A commemoration is then made of the occurring Sunday.

All the delight of heaven, all the hopes of earth, are centered on the cradle where Mary sleeps, while her heart is watching before God. Wisdom praises her own self: by the blessed daughter of Anne and Joachim, the loving preference shown by that Divine Wisdom from the beginning of the world, is already justified; for ever more it will be her delight to be with the children of men. The chosen vine, the vine of the Peaceful One is before us, announcing, by its fragrant blossom, the divine grape, whose juice, pressed out in the wine-press of the cross, will give fruitfulness to every soul, and will inebriate earth and heaven.

The Church returns, in the Gradual, to Mary’s great privilege, her virginal maternity, which gave God to the world.

This is the most solemn embassy in the history of Angels or of men; it shows us how Mary is what her name signifies, Mistress of the world. The highest interests of the human race, past, present, and to come, of the heavenly hierarchy, and of God himself, are here at stake; and the transaction is carried on between the Most High and the Virgin of Nazareth alone, as having exclusive right, the One to propose, the other to accept, both to conclude. The Angel is but a messenger; man, too, stands in waiting; Mary enters into a contract with the Creator, in the name of Angels and of men, as in her own name; in the name of the entire world, which she represents, and over which she reigns supreme.

Hail, then, to our Queen on her birthday! all hail to Mary! May she herself, in the holy Sacrifice, present our offerings to God for her people.

Let us pray that the intercession of Our Lady, and the divine mercy, may remove every obstacle to the efficacy of the Sacrifice which is prepared on the Altar.

Then the commemoration of the Sunday.

The Preface is the same as for the eighth of September, except that for the words “in Nativitate, on the Nativity,” are substituted in Festivitate, on the festival of the blessed Mary.

Inebriated with the divine mysteries, let us congratulate the august vine, which just now in the Epistle promised us this rich wine.

The Postcommunion proclaims the universality of Mary’s patronage; may our Lord grant us always to experience it.

The Postcommunion of the occurring Sunday is then added; and the Gospel of the said Sunday is read at the end of the Mass, instead of that of St. John.