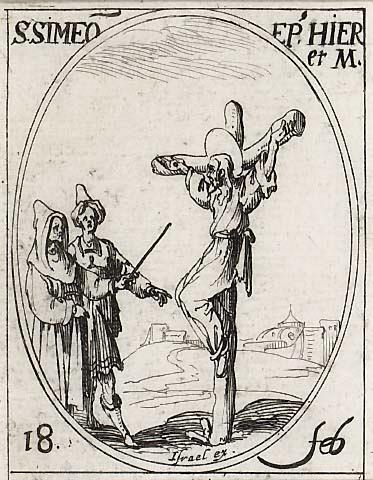 How venerable our Saint of today, with his hundred and twenty years, and his episcopal dignity, and his Martyr crown! He succeeded the Apostle St. James in the See of Jerusalem; he had known Jesus, and had been his disciple; he was related to Jesus, for he was of the House of David; his father was Cleophas, and his Mother that Mary whom the tie of kindred united so closely to the Blessed Mother of God that she has been called her Sister. What grand titles these of Simeon, who comes with all our other Martyrs of Lent, to inspirit us to penance! Such a veteran, who had been a contemporary of the Savior of the world, and was a Pastor who could repeat to his flock the very lessons this Jesus had given him—such a Saint, we say, could never rejoin his Divine Master save by the path of martyrdom, and that martyrdom must be the Cross. Like Jesus, then, he dies on a Cross, and his death, which happened in the year 106, closes the first period of the Christian Era, or as it is called, The Apostolic Age. Let us honor this venerable Pontiff, whose name awakens within us the recollection of all that is dear to our Faith. Let us ask him to extend to us that fatherly love which nursed the Church of Jerusalem for so many long years. He will bless us from that throne which he won by the Cross, and will obtain for us the grace we so much need—the grace of conversion.

The following is the Lesson given on St. Simeon:

Receive, most venerable Saint! the humble homage of our devotion. What is all human glory compared with thine! Thou wast of the family of Christ; thy teaching was that which His divine lips had given thee; thy charity for men was formed on the model of his Sacred Heart; and thy death was the closest representation of His. We may not claim the honor thou hadst of calling ourselves Brothers of the Lord Jesus; but pray for us, that we may be of those, of whom he thus speaks: Whosoever shall do the will of my Father that is in heaven, he is my brother, and sister, and mother. We have not, like thee, received the doctrine of salvation from the very lips of Jesus; but we have it in all its purity, by means of holy Tradition, of which thou art one of the earliest links; oh! obtain for us a docility to this word of God, and pardon for our past disobedience. We have not to be nailed to a cross, as thou wast; but the world is thickly set with trials, to which our Lord himself gives the name of the Cross. These we must bear with patience, if we would have part with Jesus in his glory. Pray for us, O Simeon, that henceforth we may be more faithful; that we never more become rebels to our duty; and that we may repair the faults we have so often committed by infringing the law of our God.