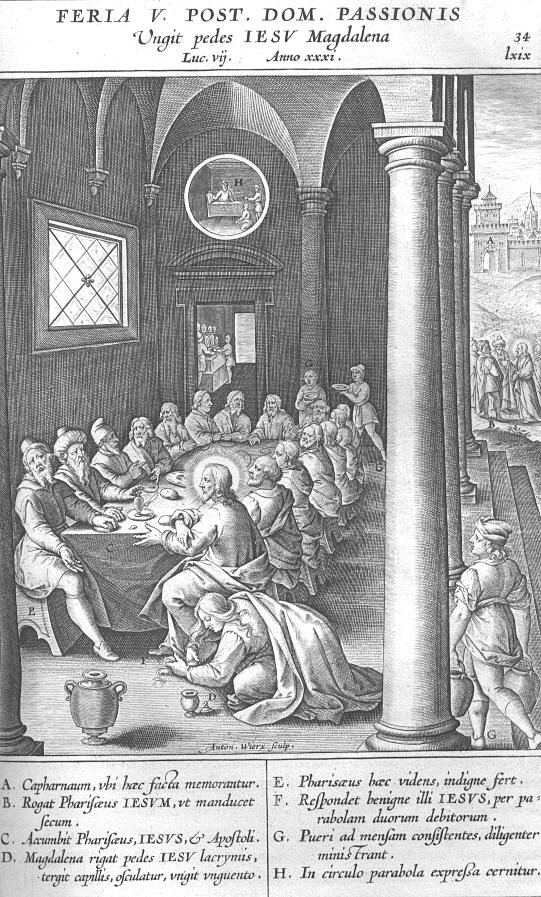 The Pharisee, then, is shocked! His heart had within it much of that Jewish pride which is soon to crucify the Messias. He looks disdainfully at Magdalene; he is disappointed with his Guest, and murmurs out his conclusion: This man, if he were a Prophet, would surely know who and what manner of woman this is! Poor Pharisee!—if he had the spirit of God within him, he would recognize Jesus to be the promised Savior, by this wonderful condescension shown to a penitent. With all his reputation as a Pharisee, how contemptible he is, compared with this woman! Jesus would give him a useful lesson, and draws the parallel between the two—Magdalene and the Pharisee:—he passes his own divine judgment on them, and the preference is given to Magdalene. What is it that has thus transformed her, and made her deserve not only the pardon but the praise of Jesus? Her love: She hath loved her Redeemer, she hath loved him much; and therefore, she was forgiven much. A few hours ago, and this Magdalene loved but the world and its pleasures; now she cares for nothing, sees nothing, loves nothing, but Jesus: she is a Convert. Henceforward, she keeps close to her Divine Master; she is ambitious to supply his wants; but above all, she longs to see and hear him. When the hour of trial shall come, and his very Apostles dare not be with him, she will follow him to Calvary, stand at the foot fo the Cross, and see Him die that has made her live. What an argument for hope is here, even for the worst of sinners! He to whom most is forgiven, is often the most fervent in love! You, then, whose souls are burdened with sins, think of your sins and confess them; but most of all, think how you may most love. Let your love be in proportion to your pardon, and doubt it not: Your sins shall be forgiven.