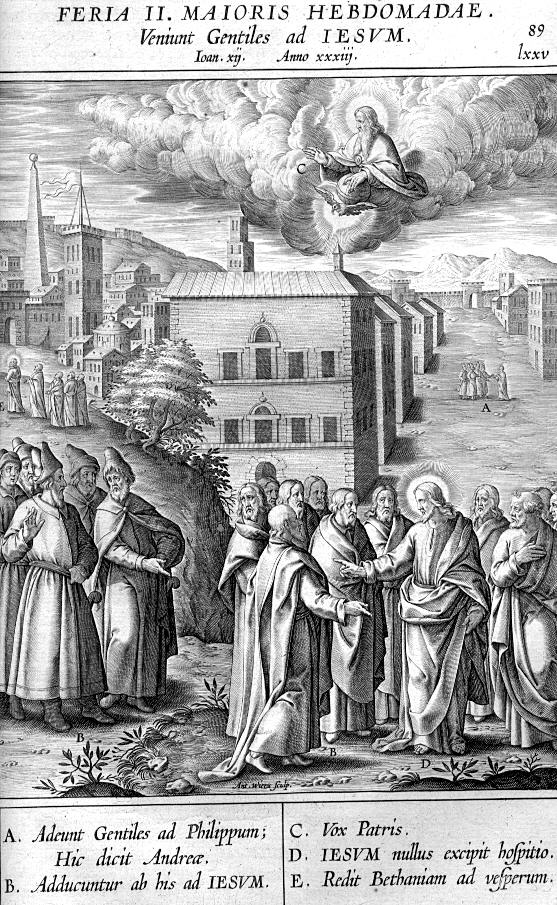 This morning also, Jesus goes with his Disciples to Jerusalem. He is fasting, for the Gospel tells us that he was hungry. He approaches a fig-tree, which is by the wayside; but finds nothing on it, save leaves only. Jesus, wishing to give us an instruction, curses the fig-tree, which immediately withers away. He would hereby teach us what they are to expect, who have nothing but good desires, and never produce in themselves the fruit of a real conversion. Nor is the allusion to Jerusalem less evident. This City is zealous for the exterior of Divine Worship; but her heart is hard and obstinate, and she is plotting, at this very hour the death of the Son of God.

The greater portion of the day is spent in the Temple, where Jesus holds long conversations with the Chief Priests and Ancients of the people. His language to them is stronger than ever, and triumphs over all their captious questions. It is principally in the Gospel of St. Matthew (chapters 26, 27, and 28) that we shall find these answers of our Redeemer, which so energetically accuse the Jews of their sin of rejecting the Messias, and so plainly foretell the punishment their sin is to bring after it.

At length, Jesus leaves the Temple, and takes the road that leads to Bethania. Having come as far as Mount Olivet, which commands a view of Jerusalem, he sits down and rests awhile. The Disciples make this an opportunity for asking him how soon the chastisements he has been speaking of in the Temple will come upon the City. His answer comprises two events: the destruction of Jerusalem, and the final destruction of the world. He thus teahes them that the first is a figure of the second. The time when each is to happen is to be when the measure of iniquity is filled up. But with regard to the chastisement that is to befall Jerusalem, he gives this more definite answer: Amen, I say to you: this generation shall not pass, till all these things be done. History tells us how this prophecy of Jesus was fulfilled; forty years had scarcely elapsed after his Ascension, when the Roman army encamped on this very place where he is now speaking to his Disciples, and laid siege to the ungrateful and wicked City. After giving a prophetic description of that Last Judgment, which is to rectify all the unjust judgments of men, he leaves Mount Olivet, returns to Bethania, and consoles the anxious heart of his most holy Mother.

The Station, at Rome, is in the Church of Saint Praxedes. It was in this Church that Pope Paschal the Second, in the 9th century placed two thousand three hundred bodies of holy Martyrs, which he had ordered to be taken out of the Catacombs. The Pillar to which our Savior was tied during his scourging is also here.

Mass. The Introit is taken from the 34th Psalm. Jesus, by these words of the Royal Propet, prays to his Eternal Father that he would defend him against his enemies.

In the Collect, the Church teaches us to have recourse to the merits of our Savior’s Passion, in order that we may obtain from God the help we stand in need of amidst our many miseries.

Then is added one of the following Collects.

The Sufferings of our Redeemer, and the patience wherewith he is to bear them, are thus prophesied by Isaias, who is always so explicit on the Passion. Jesus has accepted the office of Victim for the world’s salvation; he shrinks from no pain or humiliation: he turns not his Face from them that strike him and spit upon him. What reparation can we make to this Infinite Majesty, who, that he might save us, submitted to such outrages as these? Observe these vile and cruel enemies of our Divine Lord: now that they have him in their power, they fear him not. When they came to seize him in the Garden, he had but to speak, and they fell back upon the ground; but he has now permitted them to bind his hands and lead him to the High Priest. They accuse him; they cry out against him; and he answers but a few words. Jesus of Nazareth, the great Teacher, the wonder-worker, has seemingly lost all his influence; they can do what they will with him. It is thus with the sinner; when the thunder-storm is over, and the lightning has not struck him, he regains his courage. The holy Angels look on with amazament at the treatment shown by the Jews to Jesus, and falling down, they adore the Holy Face, which they see thus bruised and defiled: let us, also, prostrate and ask pardon, for our sins have outraged that same Face.

But let us hearken to the last words of our Epistle: He that hath walked in darkness, and hath no light, let him hope in the name of the Lord, and lean upon his God. Who is this but the Gentile, abandoned to sin and idolatry? He knows not what is happening at this very hour in Jerusalem; he knows not that the earth possesses its Savior, and that this Savior is being trampled beneath the feet of his own chosen people: but in a very short time, the light of the Gospel will shine upon this poor Gentile: he will believe; he will obey; he will love his Redeemer, even to the laying down his life for him. Then will be fulfilled the prophecy of the unworthy Pontiff, who prophesied against his will that the death of Jesus would bring salvation to the Gentiles, by gathering into one family the children of God, that hitherto had been dispersed.

In the Gradual, the Royal Prophet again calls down, on the executioners of our Lord, the chastisements they have deserved by their ingratitude and their obstinacy in sin.

The Tract is the one used by the Church on every Monday, Wednesday, and Friday during Lent. It is a prayer, begging God to bless the works of penance done during this holy Season.

As we have already said, the event related in this passage of the Gospel took place on Saturday, the eve of Palm Sunday; but, as formerly there was no Station for that day, the reading of this Gospel was deferred till the following Monday. The Church brings this episode of the last days of our Savior before us, because it enables us to have a clearer understanding of the history of the Passion.

Mary Magdalene, whose conversion was the subject of our meditation a few days back, is a prominent figure in the Passion and Resurrection of her Divine Master. She is the type of a soul that has been purified by grace, and then admitted to the enjoyment of God’s choicest favors. It is of importance that we study her in each of the several phases, through which divine grace led her. We have already seen how she keeps close to her Savior and supplies his sacred wants; elsewhere, we shall find Jesus giving the preference to her over her sister Martha, and this because Mary chose a better part than Martha; but now, during these days of Passiontide, it is her tender love for Jesus that makes her dear to us. She knows that the Jews are plotting Jesus’ death; the Holy Ghost, who guides her through the different degrees of perfection, in spires her, on the occasion mentioned in today’s Gospel, to the performance of an action which prophesied what she most dreaded.

One of the three gifts offered by the Magi to the Divine Infant was Myrrh; it is an emblem of death, and the Gospel tells us that it was used at the Burial of our Lord. Magdalene, on the day of her conversion, testified the earnestness of her change of heart by pouring on the feet of Jesus the most precious of her perfumes. She gives him, today, the same proof of her love. Her divine Master is invited by Simon the Leper to a feast: his Blessed Mother and his Disciples are among the guests: Martha is busy, looking after the service. Outwardly, there is no disturbance; but inwardly, there are sad forebodings. During the repast, Magdalene is seen entering the room, holding in her hand a vase of precious spikenard. She advances towards Jesus, kneels at his feet, anoints them with the perfume, and wipes them with her hair, as on the previous occasion.

Jesus lay on one of those couches, which were used by the Eastern people during their repasts. Magdalene, therefore, could easily take her favorite place at Jesus’ feet, and give him the same proof of her love as she had already in the Pharisee’s house. The Evangelist does not say that this time, she shed tears. St. Matthew and St. Mark add that she poured the ointment on his head also. Whether or not Magdalene herself understood the full import of what the Holy Ghost inspired her to do, the Gospel does not say; but Jesus himself revealed the mystery to his Disciples, and we gather from his words that this action of Magdalene was, in a certain manner, the commencement of his Passion: She, in pouring this ointment upon my body, hath done it for my burial.

The fragrance of the Ointment fills the whole house. One of the Disciples, Judas Iscariot, dares to protest against this waste, as he calls it. His base avarice deprives him of feeling and respect for his Divine Master. His opinion was shared in by several of the other Disciples, for they were still carnal minded. For several reasons Jesus permits Magdalene’s generosity to be thus blamed. And firstly, he wishes to announce his approaching death, which is mystically expressed by the pouring of this ointment upon his body. Then, too, he would glorify Magdalene; and he therefore tells them that are present that her tender and ardent love shall be rewarded, and that her name shall be celebrated in every country, wheresoever the Gospel shall be preached. And lastly, he would console those whose generous love prompts them to be liberal in their gifts to his Altars, for what he here says of Magdalene is, in reality, a defense for them, when they are accused of spending too much over the beauty of God’s House.

Let us prize each of these diving teachings. Let us love to honor Jesus, both in his own person, and in his poor. Let us honor Magdalene, and imitate her devotion to the Passion and Death of our Lord. In fine, let us prepare our perfumes for our Diving Master: there must by the Myrrh of the Magi, which signifies penance, and the precious Spikenard of Magdalene, which is the emblem of generous and compassionating love.

In the Offertory, our Redeemer implores his Eternal Father to deliver him from his enemies, and to fulfill the decrees regarding the salvation of mankind.

The Secret tells us the wonderful power of the Sacred Mysteries. Not only does this Sacrifice purify our souls; it also raises them to perfect union with Him who is their Creator.

Then is added one of the following Prayers:

After the Faithful have partaken of the Divine Mystery, there is read, in the Communion-Anthem, a malediction against the enemies of our Savior. Thus does God act in his government of the world: they who refuse his mercy cannot escape his justice.

The Church concludes her Prayers of this morning’s Sacrifice by begging that her children may persevere in the holy fervor which they have received at its very source.

To this is added one of the following:

As an appropriate conclusion to this day, we may use the following beautiful Prayer, taken from the ancient Gallican Liturgy: