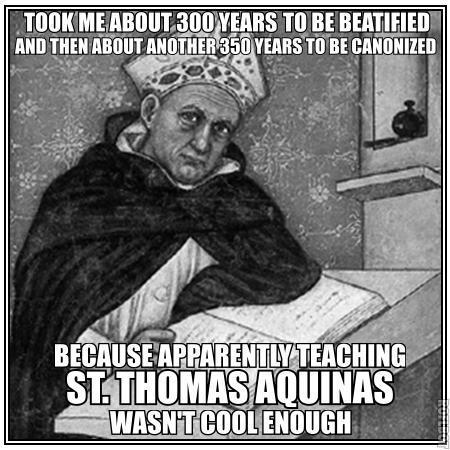 On March 24, 2010, His Holiness gave a lengthy tribute to the “tutor to the Angelic Doctor” in St. Peter’s Square. Following the address, he said, in English (emphasis mine):

In our catechesis on the Christian culture of the Middle Ages, we now turn to Saint Albert, better known as Albertus Magnus, Albert the Great. A universal genius whose interests ranged from the natural sciences to philosophy and theology, Albert entered the Dominicans and, after studies in Paris, taught in Cologne. Elected provincial of the Teutonic province, he served as bishop of Regensburg for four years and then returned to teaching and writing. He played an important part in the Council of Lyons, and he worked to clarify and defend the teaching of Saint Thomas Aquinas, his most brilliant student. Albert was canonized and declared a Doctor of the Church by Pope Pius XI, and Pope Pius XII named him the patron of the natural sciences. Saint Albert shows us that faith is not opposed to reason, and that the created world can be seen as a “book” written by God and capable of being “read” in its own way by the various sciences. His study of Aristotle also brought out the difference between the sciences of philosophy and theology, while insisting that both cooperate in enabling us to discover our vocation to truth and happiness, a vocation which finds its fulfilment in eternal life.

The entire address goes into greater detail about St. Albert’s life and accomplishments. The Catholic Encyclopedia has much more still.