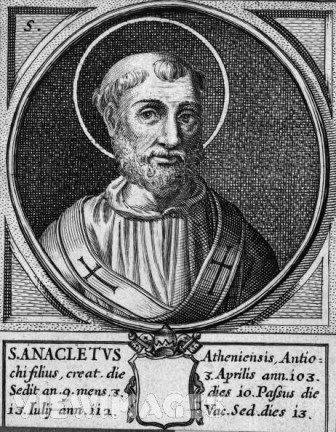 The name of Anacletus sounds like a lingering echo of the solemnity of June 29th Linus, Clement, and Cletus, the immediate successors of St. Peter, received from his hands the pontifical consecration; Anacletus had a less but still inestimable glory of being ordained priest by the Vicar of the Man-God. Whereas the feasts of most of the martyr Pontiffs who came after him are only of simple rite, that of Anacletus is a semi-double, because of his privilege of being the last Pope honored by the imposition of hands of the Prince of the Apostles. It was also during his pontificate that the Eternal City had the glory of receiving within its walls the beloved disciple, who had come to fulfill his promise and drink of his Master’s chalice. “O happy Church,” exclaims Tertullian, “into whose bosom the Apostles poured not only all their teaching, but their very blood; where Peter imitated his Lord’s Passion by dying on the cross; where Paul, like John the Baptist, received his crown by means of the sword; whence the Apostle John, after coming forth safe and sound from the boiling oil, was sent to the isle of his banishment.”

By the almighty power of the Spirit of Pentecost, the progress of the faith in rome was proportionate to the bountiful graces of our Lord. Little by little the great Babylon, drunk with the blood of the martyrs, was being transformed into the Holy City. This new-born race, so full of promise for the future, could already reckon among its members representatives of every class of society. Beside the boiling cauldron where the Prophet of Patmos did homage to the New Jerusalem by offering within her walls his glorious confession, two consuls, one representing the ancient patrician rank, the other the more modern nobility of the Cæsars, Acilius Glabrio, and Flavius Clemens, together fell by the sword of martyrdom. Anacletus adorned the tomb of the Prince of the Apostles, and provided a burial place for the other pontiffs. Following his example, the distinguished families of Rome opened galleries for subterranean cemeteries, all along the roads leading to the imperial city. There rest innumerable soldiers of Christ, victorious by their blood; and there, too, sleep in peace with the anchor of salvation beside them, the most illustrious names of earth.

Glorious Pontiff! thy memory is so closely linked with that of Peter, that many reckon thee under a somewhat different name, among the three august persons raised by the Prince of the apostles to the highest rank in the hierarchy. Nevertheless, in distinguishing thee from Cletus, who appeared on the sacred cycle in the month of April, we are justified by the authority of the holy Liturgy which appoints thee a separate feast, and by the constant testimony of Rome itself, which knows better than any the names and the history of its pontiffs. Happy art thou in being thus, as it were, lost sight of among the foundations whereon rest forever the strength and beauty of the Church! Give us all a special love for the particular positions assigned to us in the sacred building. Receive the grateful homage of all the living stones who are chosen to form the eternal temple, and who will all lean upon thee for evermore.