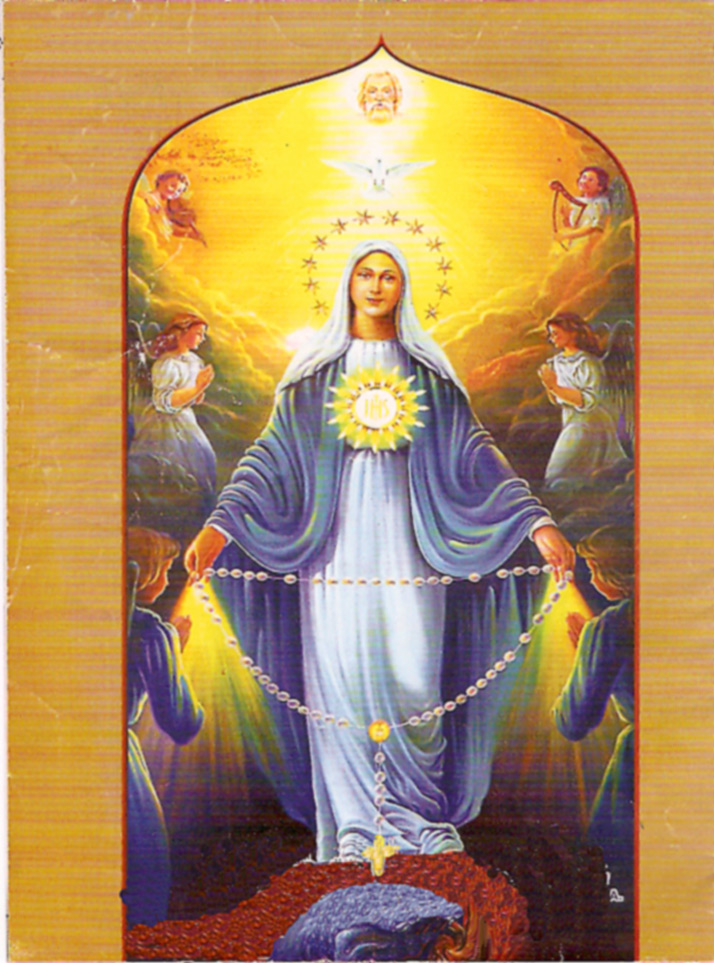 It is customary with men of the world to balance their accounts at the end of the year, and ascertain their profits. The Church is now preparing to do the same. We shall soon see her solemly numbering her elect, taking an inventory of their holy relics, visiting the tombs of those who sleep in the Lord, and counting the sanctuaries, both old and new, that have been consecrated to her divine Spouse. But today’s reckoning is a more solemn one, the profits more considerable: she opens her balance sheet with the gain accruing to our Lady from the mysteries which compose the Cycle. Christmas, the Cross, the triumph of Jesus, these produce the holiness of us all; but before and above all, the holiness of Mary. The diadem which the Church thus offers first to the august Sovereign of the world, is rightly composed of the triple crown of these sanctifying mysteries, the causes of her joy, of her sorrow, and of her glory. The joyful mysteries recall the Annunciation, the Visitation, the Birth of Jesus, Mary’s Purification, and the Finding of our Lord in the Temple. The sorrowful mysteries bring before us the Agony of our blessed Lord, his being scourged, and crowned with thorns, the carrying of the Cross, and the Crucifixion. While in the glorious mysteries, we contemplate the Resurrection and Ascension of our Savior, Pentecost, and the Assumption and Coronation of the Mother of God. Such is Mary’s Rosary; a new and fruitful vine, which began to blossom at Gabriel’s salutation, and whose fragrant garlands form a link between earth and heaven.

Soliman II, the greatest of the Sultans, taking advantage of the confusion caused in the West by Luther, had filled the sixteenth century with terror by his exploits. He left to his son, Selim II the prospect of being able at length to carry out the ambition of his race: to subjugate Rome and Vienna, the Pope and the Emperor, to the power of the Crescent. The Turkish fleet had already mastered the greater part of the Mediterranean, and was threatening Italy when, on the 7th of October, 1571, it came into action, in the Gulf of Lepanto, with the pontifical galleys supported by the fleets of Spain and Venice. It was Sunday; throughout the world the confraternities of the Rosary were engaged in their work of intercession. Supernaturally enlightened, St. Pius V watcfhed from the Vatican the battle undertaken by the leader he had chosen, Don John of Austria, against the three hundred vessels of Islam. The illustrious Pontiff, whose life’s work was now completed, did not survive to celebrate the anniversary of the triumph; but he perpetuated the memory of it by an annual commemoration of our Lady of Victory. His successor, Gregory XIII, altered this title to our Lady of the Rosary, and appointed the first Sunday of October for the new Feast, authorizing its celebration in those churches which possessed an altar under that invocation.

In the Gradual, let us congratulate he Queen of the holy Rosary on her perfect life, all truth, and justice, and meekness, which won her the love of the supreme King. In the Alleluia Verse, let us proclaim the nobility of her race, unequalled in the whole world.

The Gospel is the same as on the Feast of the most holy Name of Mary. “At that time, the Angel Gabriel was sent from God, into a city of Galilee, called Nazareth, to a Virgin espoused to a man whose name was Joseph, of the house of David; and the Virgin’s name was Mary. And the Angel being come in, said to her: Haill, full of grace! the Lord is with thee; blessed art thou among women.” Blessed art thou among women, repeated Elizabeth a few days later, and blessed is the fruit of thy womb.—These two salutations, with the name of Mary added to the Angel’s greeting and the name of Jesus to Elizabeth’s, constituted the Ave Maria in the time of St. Dominic, the promulgator of the Rosary. The prayer, Holy Mary Mother of God which now so beautifully completes the formula of praise, received the sanction of the Church in the sixteenth century. No better Gospel could then have been chosen for today, for it gives the original text of the Rosary, and describes the first of its mysteries.